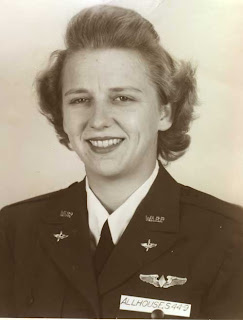 Sarah Jane "Sadie" (Allshouse) Gleeson, 84, of East McKeesport, died Tuesday, July 3, 2007, at home. She was born May 21, 1923, in Wilmerding to the late Edward L. and Alma (Hallam) Allshouse and also was predeceased by son Glenn Gleeson, former husband Joseph Gleeson; siblings Hallam and Robert Allshouse, Blanche Laird and Harriet Moore and a brother-in-law, Robert Laird. Sarah was a retired sales representative for Central Pharmaceuticals, Seymour, Ind., and had received 15 Archie awards as the top salesperson.

She was a veteran of World War II, having served in the Women's Air Force Service Pilots, and was a member of the Women Aviators Association and Linway United Presbyterian Church, North Versailles. Sarah enjoyed vacationing with family at Edinboro Lake, swimming, water skiing and golfing and liked to travel with friends and attend W.A.S.P. reunions.

Friends will be received from 2 to 4 and 7 to 9 p.m. Thursday at the FORGIE-SNYDER FUNERAL HOME, 1032 Broadway, East McKeesport, 412-823-8083, where services will be at 11 A.M. Friday with the Rev. Thomas Moore officiating. Interment with military honors will follow in Grandview Cemetery, North Versailles.

SARAH, IN HER OWN WORDS
Posted by Wings Across America buglegirl at 8:19 AM No comments: 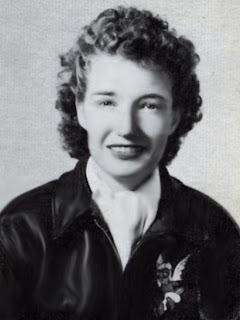 KALISPELL, MONTANA - Kathleen Nova (Kelly) Titland, 87, an Air Force WASP veteran who taught in Cut Bank until retiring, died of natural causes May 22 at her home in Kalispell. A memorial service with military honors is 2 p.m. Monday at John-son Mortuary Chapel in Kalispell. Johnson Mortuary and Crematory is in charge of arrangements.


Kathleen was born Jan. 18, 1920, in Duran, N.M., the daughter of Daniel and Nova (Simpson) Kelly.   She was raised in Tucum-cari, N.M., and graduated from New Mexico State University with a degree in education.

Meeting the requirements for the newly created Army Air Forces flying training program for women pilots, Kathleen  paid her way to  Texas in early 1943.  On August 7, 1943, she graduated as a member of WASP class 43-4, the largest class ever to graduate (112).  From Avenger Field, she was sent to Love Field as a pilot with the Fifth Ferrying Group.  However, shortly after arriving, her orders were changed, and she was sent to Camp Davis, North Carolina, where she became one of the first women to tow targets for ground to air artillery training. She pursued flying with the Women Airforce Service Pilots (WASP); flying various airplanes during World War II.

She was united in marriage to Robert John Titland on June 1, 1947, in Superior, Mont.

After receiving a master's of education degree, she enjoyed a long teaching career in Cut Bank, Mont., until retiring after 25 years.

Following her retirement, she volunteered for many years at Kalispell Regional Medical Center and the Kalispell Dialysis Center. She enjoyed traveling, painting, hiking, photography and continued to enjoy flying.

Survivors include a son, Robert (Michelle) Titland Jr. of Great Falls; three daughters, Lee Scroggins of Las Vegas, Nev., Susan (Mark) Foley of Wasilla, Alaska, and Sara Tutland of Albu-querque, N.M.; five grandchildren and five great-grandchildren. She was preceded in death by her husband, Robert, in 1994.

The family suggests that memo-rial contributions be sent to the Dialysis Patient Fund, 135 Com-mons Way, Kalispell, MT 59901. Condolences may be sent online to johnsonmortuary.com and/or greatfall-stribune.com/obituaries.


Posted by Wings Across America buglegirl at 10:46 AM 1 comment: