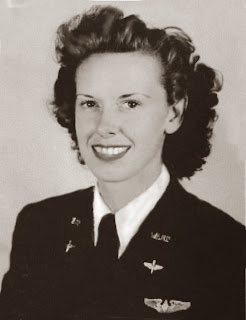 On July 10, 2009, America lost another of its courageous, patriotic, pioneering WASP.

Alberta Antonia Paskvan Kinney was born in Black Eagle, Montana, right across the Missouri River from Great Falls, on July 16, 1919. She was one of two redheads in a family of six children. Her parents had immigrated to Montana from Croatia, so young Alberta grew up speaking Croation before she could speak English.

Alberta’s mother died when she was 4 years old. All 6 children moved in with their maternal grandmother, an aunt, and uncle. One of her fondest early childhood memories was a summer trip from Black Eagle, Montana to Chicago, Illinois to the 1933 World’s Fair when she was 14. Her uncle rigged 2 extra jump seats in the Overland, and the family took off across the country. When they reached Kansas City, they visited the airport, and, thanks to her grandmother, Alberta had her first ride in an airplane. That ten minute site-seeing trip over Kansas City was something she never forgot.

Alberta graduated from Great Falls high school, and was working for the Navy in Seattle when she read about the WASP program. Because America had entered World War II, civilian flying was prohibited near the coastlines. So, Alberta took flying lessons in Yakima, from an ex-Alaskan bush pilot. Her first solo was on skis! As soon as she had the required hours, she applied for and was accepted into the WASP training program in class 44-7.

She reported to Avenger Field in February of 1944, during one of the coldest winters in West Texas history. For a girl from Great Falls, Montana, the winter was no problem for her. After graduation, Alberta was assigned to Aloe Field, Victoria, Texas, flying tow target missions in AT-6’s for the gunnery training program.

After the WASP were disbanded, Alberta returned to Montana, where she earned her instructor’s rating and worked at a small flying school, eventually teaching CAA classes for pilots returning from combat wanting to transition to civilian flying at Gore Field Air Base. As the war was winding down, Alberta went to Florida and worked for the Airline Training, Inc., where she eventually met Frank Kinney, formerly with the RCAF during the Battle of Britian and then joined the Navy when the US entered the war. “He was Texas, I was from Montana, and we got married in New Orleans,”

Frank and his new wife moved to Sumatra, where he flew for Standard Vacuum for several years. The couple returned to the States, raising their 3 sons (Fran, Michael and Will) in Michigan until Frank died.

Alberta moved back to Whitefish, Montana and became a very active mom and grandmom. Most recently, she had moved, first to Arizona and then to New York to be near her family.

Although she did not live to receive the Congressional Gold Medal, Alberta did know that the President had signed the bill. In her memory, Representative Chris Lee of NY added a tribute to WASP Alberta Kinney into the Congressional Record on July 14, 2009.

A few years ago, Alberta put her wings, her dogtags, and her insigna into a special shadow box. She showed it to her granddaughter, Susan and promised her that one day it would be hers. Susan just stood and looked at it and finally said, “But, Grandma, what if I don’t want to fly?” Alberta answered, “This doesn’t mean you have to fly. This means you can do anything you want to do.”

Posted by Wings Across America buglegirl at 4:05 PM No comments: