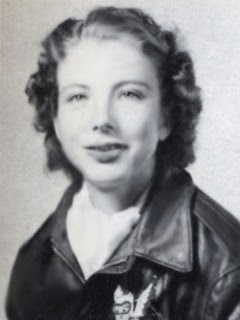 She had just had her 91st Birthday on October 12th. Inez had been in a nursing home for several years before she passed away and was alert and communicative until about five months ago.

Inez was in my Bay at Sweetwater and was stationed at Romulus in the Third Ferry Group, Ferry Command and flew most of the aircraft that the Air Force had excepting for the Pursuit and Heavy Bombers.

After we were disbanded she flew twin engined aircraft as an Executive Pilot. After marrying Jack Woods; Inez became a college professor and after retiring; she became a Real Estate Broker and enjoyed the Real Estate Boom in California.

Inez and Jack had one daughter named "Barbara" and two Grandchildren; a girl and a boy. Barbara is married to Sam Ragucci and lives at 742 Brown Sage Drive, Glendora, Carlifornia, 91741.

*Inez grew up in St. Louis, Missouri and graduated from Hempstead School in 1930. She later went on to earn her BA in Journalism from the U of MO School of Journalism in 1938. While at college, she entered the CPT program and earned her private pilot's license. In 1943, while working for the Curtis Wright company, she learned of the WASP training program, applied and was accepted into class 43-W-4. In 2002, Inez was inducted into the 99's International Forest of Friendship

Inez's ashes have been scattered in the Pacific Ocean; as was Jack's when He died several years ago.

Posted via email by WASP Rosa Lea Meek Dickerson w/ *additional information by webmaster
Posted by Wings Across America buglegirl at 9:56 AM No comments: 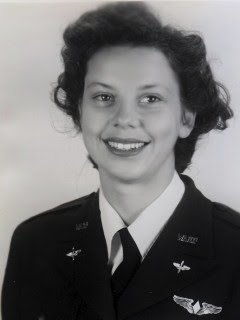 Born to Fred Christian Metz and Martha Julia Fritz Metz on March 4, 1925. She was an aviator and native of Miami, FL.

Emily Gile' s childhood and adolescence in Miami, Florida and her family' s business in cows, chickens and turkeys during the Great Depression when her father was unable to find work in accounting.

Determined to become a WASP, Gile was initially turned away because of her age, but earned her private license while working at the Army Air Corp base . On the day she turned eighteen and a half, she hopped a military flight bound to Washington DC and was escorted to be interviewed at the Pentagon with Jacqueline Cochran who admitted her into the program.

Gile completed her training at Avenger Field in Sweetwater, TX graduating Oct. 18th, 1944. She was then was stationed at Greenwood, Mississippi and ferried planes to different bases and tested repaired planes before they entered back into service. The WASP were deactivated in December of 1944.

Emily Metz Gile then married and served in the Air Force Reserves until she became pregnant with her son. She then attended Concordia River Forest College to become a teacher for elementary children in parochial schools. Then Gile received her Masters in reading education at Appalachian State University. Gile then moved Hillsville, VA to be a reading specialist for Carroll County Schools.

After her retirement from teaching she volunteered in so many ways. She was involved with many organizations including the American Association for Retired Persons serving as chairman for the retired teachers for years. Emily Gile was also a member of the General Federation of Women' s Clubs, Carroll County Retired Teachers, American Legion and the American Cancer Society serving as relay Captain for many years.

She also believed that the children of Carroll Co. needed the opportunity to experience flight so she began the Young Eagles' Program Local EAA chapter.

Emily Gile leaves her two children: one son, Emory Bearden of Hillsville, VA; one daughter and son-in-law, Larry and Martha Musser and her three grandchildren, Elizabeth, Caroline, and Sarah Musser of Winston-Salem, NC.

A guestbook is available online by visiting http://www.vaughanguynnandmcgrady. com. Vaughan-Guynn-McGrady Chapel is serving the family.

Posted by Wings Across America buglegirl at 7:50 AM 3 comments: