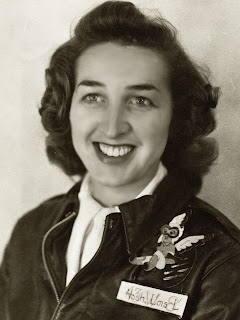 Born and raised in Ferndale, Michigan, Lois fell in love with flying at age five after riding with her family in a Ford Tri Motor.  It wasn't until years later, when she signed up for the CPT program at Michigan State Teachers College (now Eastern Michigan University), that she was given an opportunity to learn how to fly.

Attending college and working as a teacher, Lois continued to acquire flying hours. In 1943, she finished school in June and in July,  she  was accepted into the Army Air Forces experimental flight training program for women and headed to Texas.  Lois and 94 other young women pilots paid their way to Avenger Field, Sweetwater, Texas to become WASP class 43-8.  Less than half that number eventually graduated.

During the eighteen months Lois flew for the Army Air Forces, her husband, Albert E. Nash, was serving in North Africa and Italy.  As a WASP, Lois flew fifteen different types of aircraft  for her country, but the B-26 Martin Marauder remained her all time favorite.  When the WASP were disbanded on Dec. 20, 1944, Lois returned home and, eventually,  she and Albert began raising their 2 sons.

Lois spent the last few years sharing her WASP experiences with local groups and being honored for her service.  On March 10, 2010, she was one of apx. 175 WASP who attended a ceremony in Washington, DC, to award the WASP the Congressional Gold Medal, highest honor that Congress can award a civilian.  It was the largest event ever held inside the Capitol building.


Lois had been living in S. Carolina since the retirement of her late husband Albert E. Nash. She is survived by her two sons and their wives, Bill & Susan Nash of Ft Wayne Indiana, and Thomas & Donna Nash of Roswell, GA.

"Easter morning, my beloved mother Lois Nash, WASP class of 43-8 took her final flight. Her favorite plane was the B-26. She drove her own car and lived in her own home until two weeks ago. She had been busy speaking to various groups about the WASP. She did not suffer long, but my brother Bill and I are missing her badly. I have many photos in a FB tribute album which I started over a year ago on my page . Her 90th birthday was April 11th."

Other information on Lois: