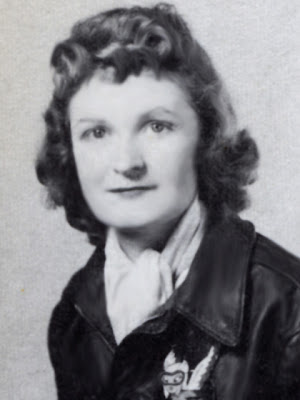 WASP Mary Louise Bowden Brown, 43-4, took her final earthly flight January 29, 2013.  She was ninety-six.  Today, she is flying higher than she has ever flown.

Born May 16, 1916, in Overbrook, Pennsylvania,  Louise became interested in flying after meeting the pilot/owners of Buck's Airport in Woodruff, New Jersey.  She accepted an invitation to join their flying club, which gave her the opportunity to solo  and build up her hours in a 50 hp Porterfield.


After hearing about the WASP training program, Louise applied and was accepted into the class of 43-4.  Of the 151 women pilots who entered the training program,  Louise was one of 112 women who graduated and earned their silver wings--August 7, 1943.  After graduation, she received Army orders to report to the Ferry Command at Romulus, Michigan.

After the WASP were deactivated (Dec. 20, 1944), Louise earned her instructor's rating, single and multi-engine ratings and taught flying for six years. Louise became a chaplain at a 125-bed hospital in Fulton, Kentucky, where she  ministered to young girls who were  serving time in the Hickman, Kentucky jail.

Louise became a missionary for the Presbyterian Church, and  for 21 years, served at a 525 bed hospital in Maharastra, West India.  From West India, she transferred to Kathmandu, Nepal, where she served for four years.

After retiring, Louise  married Sam Brown and returned to Kentucky.  After Sam passed away,  she earned her black belt in Tae Kwan Do. A short time later, she moved to New Hampshire to be near her sister.   She  was a resident of The Kendel Nurshing Home in Hanover, New Hampshire and is survied by nephew Gordon Edgan and wife, Janis.

Mary Lousie Bowden Brown was an extraordinary patriot, a Christian soldier and a fearless pioneer.    May God bless all of those whose lives she touched-- and those of us who never had the opportunity to meet her, and are touched as well.

Posted by Wings Across America buglegirl at 4:55 PM 2 comments: