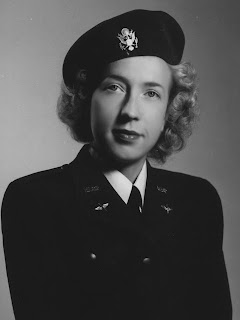 "I think of the WASP as young, daring and dedicated women of honor."
Henrietta Speckles Sproat, p. 545, "Out of the Blue and Into History" by WASP Betty Turner
_______

Henrietta Speckels Sproat was one of those extraordinary young women, just as she has described as ‘daring and dedicated women of honor’. Her life was about serving and sharing, and her spirit lives on through those whose lives she touched in so many different ways.

She died just 4 days after being awarded the Congressional Gold Medal as one of the pioneering Women Airforce Service Pilots of WWII. It is the highest honor Congress can bestow on a civilian.

Henrietta was a Texas girl, born in Coupland and later moved to the San Antonio area, where she was surrounded by military air bases. She joined the "Texas Wing of Women Fliers" and took classes from Air Corps personnel. In WASP Betty Turner's "Out of the Blue and Into History," Henrietta remembers: "Jackie Cochran talked to us one evening about the WASP. I applied and entered the class of 44-10."

Her assignment after graduation was to Aloe Army Air Field, Victoria, Texas. Even though the WASP were disbanded just 13 days after her graduation, she calls it "a time of challenge and determination, of fun and fear, and of molding lifelong friendships. We called ourselves, ‘The Lost, Last Class’, but our graduation day was most memorable, with General "Hap" Arnold handing us our wings."

After the WASP’ deactivation, Henrietta married William Sproat. They raised their family in California, but Henrietta always took the time to also help her community. "I was available for work with the Girl Scouts, charity fund-raising, and church school, where I taught for twenty years."

After her husband died in 1976, Henrietta volunteered at ‘Video Outreach’, where she helped distribute Christian videos to the world. She traveled extensively, seeing much of the world, and finally settled in Oroville, California, close to her daughter and family.

She is survived by daughters, Kathy and Debby, and son, David.

(MORE INFORMATION WILL BE POSTED as soon as it becomes available.)

Because of recent hip surgery, she was unable to reunite with other pioneering female fliers at the Washington, D.C., ceremony. However, her daughter Debby Henderson of Oroville delivered the gold medallion to her mother's bedside March 13.

The award is the highest honor a civilian can attain in the United States.

Last August, the announcement was made that Sproat and 1,074 other female fliers would receive the honor, many posthumously. Of the 300 survivors, about 200 attended the ceremony.

Although Sproat was not able to travel, her daughter said she enjoyed sharing her stories with many reporters last summer when the awards were announced, and cherished the friendships she made with other women who also served their country.

"It was very important to her," Henderson said.

Sproat was among a select number of women who earned her wings during the program, which many regard as opening the doors to women in the armed services.

The WASP program began in 1942 when there was a shortage of male pilots. More than 25,000 women volunteered, but only about 1,800 were accepted. Even fewer, such as Sproat, completed the rigorous program.

She was among the last class of graduates, and the program was deactivated soon after she finished her training in late 1944.

The WASPs delivered approximately 12,650 planes and flew more than 60 million miles, stationed at 120 Army bases in the United States.

The women were given veteran status in 1977.

Sproat's daughter said the camaraderie of the women was among the highlights of her mother's life.

Her mother spoke of her service and the work of the other women in the program as "something they could do for their country."

"It was not just that they were 'fly girls'," Henderson said. "They were very focused and concerned about helping with the war effort.

"They believed they were fulfilling their obligations to their country."

Last August, Sproat (born Henrietta Speckels) recalled that she was in her mid-20s and living in San Antonio, Texas, which was surrounded by air bases.

In 1942, she worked at Kelly Field and later San Antonio Aviation Cadet Center, and attended a class of the Texas Wing of Women Fliers, which met after her work.

During the course, Jackie Cochran, who later became the first woman to break the sound barrier, gave a talk about the Army Air Corps training program for women.

Sproat applied and was among the small percentage of those accepted.

She lived with other female fliers, sleeping on cots and subject to military inspections, marching to meals and training during the day.

Their flying needed to be perfect for graduation, and many "washed out," Sproat shared last summer.

Over the years, she kept in touch with her friends from that time of her life, including reunions every other year, the most recent of which was in 2008, her daughter shared.

When Henderson was in Washington, D.C., to receive her mother's medal, Deanie Parrish, a WASP and leader of Wings Across America — www.wingsacrossamerica.us — made an acceptance speech on behalf of the women.

Parrish said the best thing about this ceremony and receiving the award was the coverage by the news media and "that more people would hear about this story and these women who flew," Henderson said.

Henderson said when the media interviewed her mother, she was "overjoyed" at the recognition of the women's story.

"They were from every walk of life, every kind of occupation — from homemaker to engineer," Henderson said.

After the women's flying program ended in 1944, "they went back and became America again. Every time they were together they were sisters and they were bonded by this experience.

"It's a wonderful experience to be able to be a part of and observe the regard they have for each other," Henderson said.

Her mother was looking forward to the event in Washington, and asked about it every so often, she said.

Henderson, her husband, and several other family members were there to accept the award at the Capitol.

With more than 1,700 RSVPs, the assemblage was too big for the capitol rotunda, where it was originally planned, and was held in the Emancipation Hall at the Capitol Visitor Center, Henderson noted.

Staff writer Heather Hacking can be reached at 896-7758 or hhacking@chicoer.com.

Posted by Wings Across America buglegirl at 9:24 AM 1 comment: