Elizabeth Strohfus in 1944. (Courtesy of family)
By From staff reports and news services March 8


Elizabeth Strohfus, who flew military planes across the country during World War II and received two Congressional Gold Medals, died March 6 at an assisted-living center in Faribault, Minn. She was 96.
The cause was complications from a fall, said a son, Art Roberts.
Mrs. Strohfus was one of the last remaining members of the Women Airforce Service Pilots, known as WASPs. She ferried military planes in 1943 and 1944 and helped train air and infantry gunners at Las Vegas Army Airfield in Nevada.
She was one of 1,074 female pilots to earn silver wings in the WASP program. The female pilots flew military aircraft in noncombat roles during wartime to free up male pilots for combat. The women were considered civilians until Congress retroactively granted them veteran status in 1977.
Elizabeth Bridget Wall, known as Betty, was born in Faribault on Nov. 15, 1919, and described herself as an adventuresome tomboy in childhood. After completing high school in 1937, she worked in the register of deeds office at the county courthouse. It was stifling. Air Force Chief of Staff Gen. Norton Schwartz greets Elizabeth Strohfus in 2010. (Lauren Victoria Burke/AP)
“When I was in school, I couldn’t take any classes except home economics or classes for working in an office — like shorthand, typing and that sort of stuff,” she told the Owatonna People’s Press in her home town. “We were very limited because we were women. It was kind of too bad because I wasn’t too interested in those things.”
One day, she overheard a conversation about flying and grew intrigued.
“I thought, ‘What a wonderful thing to get above it all and see the beautiful world there,’ ” she said. “He asked me if I wanted to fly after he saw I was interested. I said: ‘Yes, I do. I’d love to fly.’ ”
She began spending many afternoons after work volunteering at the Faribault airport, learning from pilots with the local flying club. She became so adept at the controls of the Piper Cubs that when one of the pilots left for military service, she was asked to replace him. It would cost $100 to join.
She went to the local bank for a loan, using her bicycle as collateral.

After the WASP program was disbanded in December 1944, she was turned down for a pilot’s job with Northwest Airlines and worked as an aircraft controller in Wyoming. She eventually returned to Faribault, about 50 miles south of Minneapolis, where she married Arthur Roberts and raised a family.
Widowed in 1972, she worked for the American Cancer Society in New York as a research consultant. She wed Francis Langeslag in 1979; he died in 1988. Elizabeth Strohfus in 1944. (Courtesy of family)
A complete list of survivors was not immediately available.
A member of the Minnesota Aviation Hall of Fame, Mrs. Strohfus received Congressional Gold Medals for her service as a WASP and for her service in the Civil Air Patrol.

Respectfully reposted from the Washington Post.
Posted by Wings Across America buglegirl at 12:12 PM No comments:

Nancy was a native of Texas, where she was married and raised her three children, Nancy Smith, of Merced, Richard Beale Crout, Jr. of Milwaukee, Wisconsin, and Linda Dinius of Bloomfield, Conn. In the later years of her life, she relocated to Merced in order to be closer to her daughter, Nancy, who cared for her mother during her remaining years.

Being a voracious reader, her days were very full of reading and watching her favorite programs on television. Her passion for sports was amazing for someone of her age. Nancye's faithful little companion, Elizabeth, was the light of her life.
She was a woman of very strong faith, attending United Methodist Church of Merced. Her deep and abiding faith in God is what comforted her and helped her during the last few weeks of her life.
Nancye had an incredible life -- Most notably serving as one of the few WASP pilots during World War II. She was awarded the Congressional Gold Medal in 2010 in honor of her service. Nancye always took great pride in the time that she served our country.
She is survived by her three children, Nancy, Richard and Linda, three grandsons, two great-grandchildren, a brother and numerous nieces and nephews.
Nancye will be laid to rest with military honors next week with her husband, who preceded her in death, at Fort Bliss National Cemetery in El Paso, Texas.
Donations in Nancye's memory can be made to the Merced SPCA, P.O. Box 929, Merced, Ca. 95341.

Respectfully reposted from Obituaries:  www.cvobituaries.com
Posted by Wings Across America buglegirl at 11:56 AM No comments:

Put God first, family next, then whatever you want to do.   When you're needed be there.  You can do anything with God's help. 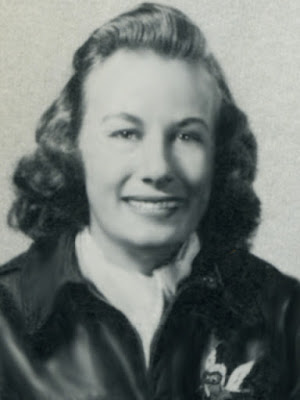 Born in Athens, Georgia, on December 16, 1921, Marion graduated with a Bachelor of Arts in journalism from the University of Georgia in May of l941, the year of Pearl Harbor. While at Georgia, she earned her private pilot's license under the prewar Civilian Pilot Training Program. This qualified her to apply for Army Air Forces flight training — the first time in history that American women would be trained to fly military aircraft.

Marion won her silver wings in 1943, in one of the first classes of women to graduate from Army Air Force flight training. After graduation from flight school at Avenger Field, Sweetwater, Texas, she was stationed at Love Field in Dallas and served in the ferry command. She picked up new planes at factories and delivered them to air bases around the country as well as to points of embarkation, for overseas shipment.

In 1944, Marion married a Marine pilot from her hometown, Lt. Col. Edward "Ned" Hodgson. They lived in Fort Worth for more than 50 years, rearing their family there. Marion delighted in being a stay-at-home mother while writing from her home. She produced and sold short stories and articles to national magazines, published four cookbooks and a novel, and wrote special features for the Fort Worth Star-Telegram, mostly about women pilots. Her book, Winning My Wings, recounting her WASP experiences, is now in its third printing.

While living in Fort Worth, Marion was active in the Junior League and St. Andrew's Episcopal Church. Widowed in 1997, she moved two years later to Wichita Falls to be near family. She continued her membership in the 99s, an international organization of women pilots, and was sworn in at Sheppard Air Force Base as the first WASP member of the Order of Daedalions, an organization of military pilots. Always full of fun, Marion also took delight in being asked to join the International Order of Characters.

Marion's primary interest and focus after the war years was faith and family. Her greatest satisfaction came through being a wife, mother, grandmother and great-grandmother. She won many honors (Texas Aviation Hall of Fame; Georgia Aviation Hall of Fame, Congressional Gold Medal), but she never felt she deserved them. "It's like God's grace," she often said, "Totally undeserved and free."

A high point in her life was her baptism in the River Jordan, after becoming a late-in-life Christian.

Marion is survived by son, Edward Sheldon Hodgson and his wife, Marlene (Skaggs) of Willis, TX, son, John Foster Hodgson of Louisville, KY, and wife, Robin (Blackerby); daughter, Marjorie Hodgson Parker and husband, Joe of Byers, TX; six grandchildren; and seven great-grandchildren. In lieu of flowers, donations to favorite charities or the WASP Museum, 2010 Avenger Field Rd, Sweetwater, TX 79556, are suggested. Condolences may be sent to the family at www.lunnscolonial.com.

A memorial service was held at 11 a.m. on Friday, April 1, 2016, at Lunn's Colonial Funeral Home with Dr. David B. Hartman officiating. Interment will be in the Hodgson family plot, Oconee Cemetery, Athens, Georgia.

Personal note:  My heavy heart at the loss of Marion Hodgson is just a bit selfish and completely temporary I know.  Marion was a friend and a world-class prayer partner and supporter.  Every WASP loss is felt as a thundering echo that somehow shakes the heavens, but the loss of Marion is more like the sound of a beautiful symphony.  This loss is heaven's gain, and my heart is overjoyed at the thought of this gentle giant of faith, finally free of earth bound challenges...finally free indeed.

Throughout the years I've been privileged to know her, I have been touched by her strength through every health challenge.  She met each one with grace, courage, and determination.  And, as always, her endearing Southern charm, and a gentle sense of humor.

With love and respect to her family and all the many, many lives she touched, loved, inspired and prayed for around the world.  God bless you all.

Posted by Wings Across America buglegirl at 12:26 PM No comments: