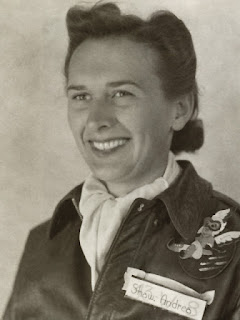 "I volunteered for the Air Force during the Korean conflict.
I assisted, then became CO WAF Squadron of 200 ladies for three years."


Andrea C. Shaw was born in Bakersfield, California on March 18, 1919.  The facts of her early life story are brief, but her life was filled with service to her county, no matter what the challenge.

She entered WASP Training -- reported to Avenger Field, Sweetwater, Texas with 97 other hopeful young women pilots.  After approximately 6 months of Army Air Force flight training, she was among the 48 proud graduates of class 43-8.  She earned her silver WASP Wings and  assigned to Merced Field, California.

From Merced she was transferred to March AFB, California; Hamilton AFB in Bakersfield, California; Chico AFB,  Chico, California and Las Vegas, Nevada.  At Las Vegas, she transitioned into the B-26.  During her time as a WASP, she flew the BT-13, AT-6, UC-78, B-26 and A-24 (used by the Navy in the Battle of Midway).  She was also one of a select group of WASP sent to officer training school in Orland, Fl.

Following the deactivation of the WASP, Andrea took charge of the road accounting department for Kern County, California.  From 1951 to 1958, she volunteered to serve with the Air Force.  She became Commanding Officer of a WAF Squadron for 3 years and was then transferred to England, where she served as a finance officer at a small hospital base.

After leaving the Air Force in 1959, Andrea earned her real estate license but eventually, took a civil service examination and was assigned to Anchorage, Alaska as a customs inspector.  One of her most vivid memories was of the Good Friday Alaskan earthquake of 1964, which lasted 20 seconds and was classified 9.2 on the Richter scale.  She later said, "It make 'Christians' of a lot of folks.  It brought out the 'best' with everyone helping anyone in need.


Andrea retired to Redmond, Washington following her service in customs, and set up house on a small lake surrounded by wildlife and 'nice neighbors.'

Andrea later wrote of her life in Washington: "I have developed a liking for the challenge of building things. With no background for carpentry, I have managed to put a 10' x 12' dec and repaired a c'xi 16' second floor deck...nothing spectacular--but bound to outlast the Pyramids!

This special lady was truly one-of-a-kind.  She had a  lifelong love of country and neighbor.  She took pleasure in building things and the beauty of the world around her.

God bless those whose lives she touched.

Taken from Betty Turner's "Out of the Blue and Into History," p 249.

Posted by Wings Across America buglegirl at 11:03 AM No comments: