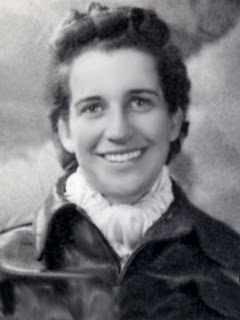 It was 1942, and the United States military was running out of pilots.

Thousands of young men were flying World War II combat missions, but not enough were left to perform the

key assignment of ferrying planes from one location to another.

Jacqueline Cochran had a plan. Cochran, a celebrated aviatrix of the time, badgered the commander of the

equal to the task, but he finally gave in, and the call for women recruits went out.

One of the first to sign up was Marion Mackey, of Englewood, a 5-foot-2 secretary with a private pilot's

license she had acquired in her spare time. Along with three dozen other volunteers, she joined Cochran at

an Army air base in Houston, where she became a member of the first contingent of WASPs -- Women

More than a thousand other women would follow that pioneering first class, nicknamed "The Guinea Pigs."

Like Mrs. DeGregorio, who was stationed at New Castle Army Air Base in Delaware, they flew all types of

military aircraft from factory to air base, or from base to base. The WASPs also flew cargo and a variety of

"People would meet Marion and say, 'You really flew planes in the war?'" remembered her stepson, Felice

DeGregorio, of Manhattan Beach, Calif. "They didn't realize what a big heart there was inside that small

Opportunities for women pilots were few after the war. Mrs. DeGregorio spent the next several years flying

charters and giving flight instruction in Florida and Maine, but finally gave up and resumed her secretarial

career in New York. It was there she met Felice DeGregorio, the gregarious proprietor of Felix's Italian

restaurant in Greenwich Village. They were married in 1966.

Mr. DeGregorio was the informal "mayor" of the block of West 13th Street between 6th and 7th Avenues,

and Mrs. DeGregorio joined him as the neighborhood's unofficial First Lady.

Restaurants on the street would come and go, but Felix's -- established by Mr. DeGregorio's father in 1937

-- endured as an unfancy purveyor of red sauce and good cheer. Mr. DeGregorio retired in 1983, and he

and Mrs. DeGregorio spent the years until his death in 1994 traveling in the United States and Europe.

to serve at 120 air bases across the country. Thirty-eight died while on missions.

Despite their contribution, the WASPs were not considered military personnel following their

decommissioning in 1944, and were not entitled to veteran's benefits or honors. With the support of Col.

Bruce Arnold, son of "Hap" Arnold, and Sen. Barry Goldwater, that situation was corrected in 1977. Mrs.

DeGregorio was among those who received the WWII Victory Medal.

Mrs. DeGregorio spent her last years in her beloved Greenwich Village. A voracious reader, she could recite

dozens of poems from memory well into her 90s. "The Lake Isle of Innisfree" by William Butler Yeats was a

"She was a sharp cookie," said her nephew, Jim Willse, editor of The Star-Ledger. "She'd read two

newspapers a day and then watch 'Jeopardy' on television. She would get more questions right than I

In addition to her stepson and nephew, Mrs. DeGregorio is survived by a niece, Maureen Mackey, of Las

Vegas, and a stepdaughter, Maria DeGregorio, of New York.

Contributions may be made in her name to The Caring Community, a Greenwich Village elderly service

Posted by Wings Across America buglegirl at 5:04 PM No comments: