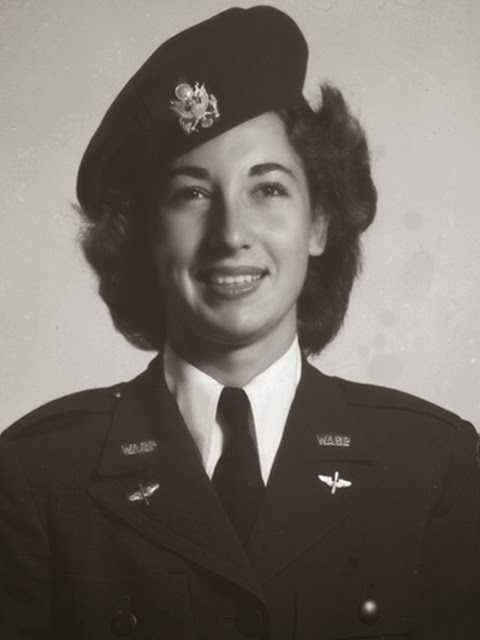 "I have always felt that the WASP experience was the greatest achievement in my life and everything thereafter was anti-climatic!  ...I still look to the sky at any sound of aircraft, and remember the good old days..."   WASP Ruth Gushe' *

Ruth had an early love of flying that developed because she lived near Clover Field in Santa Monica and Mines Field, which is now Los Angeles International. Part of her desire was, no doubt, due to publicity about Amelia Earhart and Charles Lindbergh. She eventually learned to fly with a group of women with whom she worked at North American Aviation. Because they were unable to fly on the coast they drove out to Baker, California after work on Fridays and returned on Sunday nights. She learned to fly in a 65 hp Porterfield and also took some time in a Meyers OTW, so as to familiarize herself with an open cockpit. After learning to fly she joined the Women's Airforce Service Pilots (WASP).

After all the tests and the physical, she was assigned to 44-10, the "Lost Last Class of Avenger Field." At Sweetwater, Texas, they received primary training in PT-17s and then transitioned to AT-6s.  She did instrument training in BT-13s and then flew AT-6s again for advanced and cross-country training. After graduation she was assigned to Aloe Army Air Field in Victoria, Texas, for tow-target duty and was there when the WASP were deactivacted.

After deactivation, Ruth was hired by Pan American Airlines as a stewardess and purser. She flew extensively across the Pacific to Hawaii, Fiji, New Zealand, Australia, Midway, Wake, Guam, Manila, Bangkok, Calcutta, Hong Kong, Shanghai, and Okinawa. In January of 1948 she married Jack Wesley Wright. They took over a flight school in West Sacramento-Capitol Sky Park, but within a couple of years, her husband was diagnosed with cancer. He passed away in 1961.

In 1956, she returned to work. She worked for 31 years as an office manager/financial manager in the construction and architectural fields. In 1964 she married F. Ross (Dick) Guhsé. They were married for 23 years; she was stepmother of Lynn, David and Laurel and step-grandmother to Jason Guhsé. Her husband Dick passed away in 1987, also from cancer.

In 1987 she started traveling, returning to Australia, New Zealand and Hong Kong. She also took tours to Kenya and Egypt, Indonesia and Bali, the Greek Isles, Ireland, China, South America, and Tahiti. With another former WASP, Emily Kline (44-1), she flew around the world in 1997. They started with Hong Kong for the Chinese take-over, then on to India and the Taj Mahal, London and the theater, and then back home.  She also attended many WASP reunions.

Ruth always felt that the WASP experience was the greatest achievement in her life and everything thereafter was anti-climactic! She made life-long friends there and over the years enjoyed using her computer to keep in close contact with her WASP friends. In 2010 she and the other WASP were awarded the Congressional Gold Medal. She also held membership in the Ninety-Nines and the Women Military Aviators. To the end she still looked to the sky at any sound of aircraft and remembered the good old days.

Ruth’s remains will be inurned at Arlington National Cemetery. Remembrances can be sent in the name of Ruth Glaser to the WASP Endowment.

Reposted with great respect by Wings Across America.

Posted by Wings Across America buglegirl at 6:52 PM 1 comment: