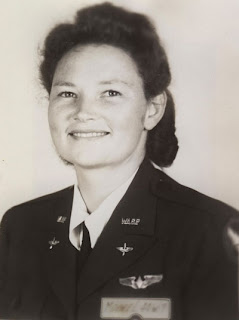 I was born in New York, New York. Later we lived in Baltimore, Maryland, South Bend, Indiana and Philadelphia, Pennsylvania. I went to Goucher College for Women one year, Maine State Teacher, and College at Townson and received a BS in Education.

I learned to fly in Westminister, Maryland, as I had a lifelong desire to fly. I needed to solo and receive my license to qualify, completed two year package contract in Montgomery County, Maryland.

I was accepted in the WASP program, class 44-7. I married Don Mann during graduation leave. I was assigned to Minter Field, Bakersfield, California as a test pilot on the BT-13 and UC-78. Deactivation notice arrived early October 1944; Don was given orders to report to Gadsden, Alabama (chemical warfare). I resigned October 12, 1944.

After deactivation, I worked for the Los Angeles Police Department seven months, organizing and coordinating recreational and social activities for girls (Deputy Auxiliary Police); part time librarian for Downey School District; reading specialist and classroom teacher; and private tutor. I was owner, with my husband, of a small recreational row boat and paddleboard rental business on Mountain Lake for eleven summers. I volunteered many times for activities with Camp Fire Girls (20 years) and worked on a committee for children in church.

I am a mother of three girls and grandmother of five children.

(Reprinted from Betty Turner's "Out of the Blue and Into History" p. 458)

Lila passed away on December 21, 2007 at her daughter's home in Downey, California.

LILA MOORE MANN was a "Special Lady" who was interested in everyone and everything around her. For 88 years, her enthusiasm carried into all aspects of her life.

FAMILY was very important to Lila. She had a wonderful childhood in Baltimore, growing up with 3 younger brothers. After marrying Don, they moved to his home in California, where he worked for the Los Angeles Police Department until retirement. They gave their three daughters a great life with memorable family time spent in the mountains. Lila loved her mountain cabin and all the summers spent working and playing there.

EDUCATION was a necessity of life to Lila. She graduated from Towsend College in Baltimore to become an elementary school teacher. She continued teaching for the Downey schools after moving to California. Lila became a Reading Specialist helping many children overcome their difficulties.

LOVE OF NATURE was a definite passion to Lila. As a child she was always outdoors swimming, sledding, ice skating or climbing trees. Her summers during college were spent as a camp counselor. She was a wonderful swimmer and diver. With an appreciation for nature, Lila began studying birds, trees and flowers. Se was a life long member of the Audubon Society.

WASP was the most memorable time in Lila's life. At the beginning of WWII, she heard about an experimental women's pilot program with the U.S. military. The women, unlike men, needed to have their pilot's license to be able to join. Lila used all of her salary as a teacher to pay for lessons. In 1943, she and her childhood friend, Eileen, joined the "Women Airforce Service Pilots" program (WASP). These special women went through a grueling physically and mentally challenging training to become the first of their kind. The women formed lifelong friendships. Lila was very proud of her accomplishment.

LILA'S FAMILY is also very proud of this Special Lady. She was a loving and devoted Mother and Grandmother to all. Because of her example, we know the importance of Family, Education, Service, and God. We'll miss her always!!!!!

Posted by Wings Across America buglegirl at 12:29 PM 1 comment: