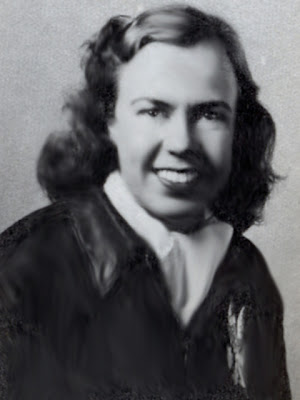 Grace Clark Fender, 91, of Amarillo,  an extraordinary woman, trailblazer for female military aviators, has slipped the bonds of Earth. She died Saturday, Oct. 8, 2011.

In her sophomore year of college, she was accepted into the Civilian Pilot Training Program and received her private pilot’s license in 1940. She graduated from Texas Women’s University with a business degree in 1942. Grace continued to fly while working as a dispatcher at the Wichita Falls Municipal Airport.

When she heard about Jacqueline Cochran’s Women’s Army Air Corps pilot program, she applied and became one of only 1,074, out of 25,000 applicants, to complete the program, becoming one of the first groups, class of 43-W-4, of women to fly military aircraft.  They were called W.A.S.P., Women Air Force Service Pilots. After being assigned to the Ferry Command, she was based in Romulus, Mich., and flew trainers, fighters and bombers to and from factories and air bases on the east coast of the U.S. and Canada.

In 2010, Grace and the other W. A. S. P. were awarded the Congressional Gold Medal for their service during World War II.  (It is the highest civilian honor that Congress can award)

After World War II, she worked for American Airlines as a ticket agent until she married naval aviator, Charles Fender. Their marriage of almost 50 years produced two daughters, which they raised in Sweeny, where Grace was a much requested substitute teacher. She and Charles spent their final years in Bartlesville, Okla., with Phillips Petroleum Company.

She is survived by her twin sister, Ruth Pryor of Dallas, and sister, Martha Barron of Albuquerque; her daughters, Laura Dunson and husband Steve of Canyon and Barbara Chamberlain and husband John of Dexter, Mich.; three grandchildren, Ben Dunson and wife Martha, great grandchildren Liam and Elliot of Hamilton, Ontario, Canada; Abbey Williams and husband Tim and great granddaughter Skylar Grace of Amarillo, and Ross Chamberlain of Dexter, Michigan. She is also survived by a step-grandson, Carl Chamberlain wife Helen and children Elaine, Will, and Henry.

She was deeply loved and will be greatly missed.

Leave online condolences at www.boxwellbrothers.com.
Private services will be held at a later date. Arrangements are by Boxwell Brothers Funeral Directors, 2800 Paramount Blvd.

*From Wings Across America.  We were privileged to interview Grace at her home in Bartlesville, Ok. on January 29, 2002.  Just days before, there had been a huge ice storm, blocking roads and making travel uncertain.  We slowly inched along, eventually pulling up in front of the house, just able to make it up the driveway.  There, standing at the window, waving and smiling "hello"  was Grace. Of all the interviews and all the driveways, this is absolutely the most memorable!


Grace just sparkled from the inside out.  What a delightful lady she was, and how honored we were to spend time with her.  We will never forget her smile and her kindness.  God bless her family and all of us whose lives she so gently touched.

Posted by Wings Across America buglegirl at 12:47 PM No comments: