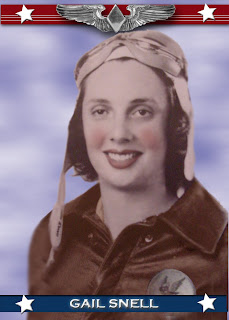 "So I went to my father and said, "Dad, I want to learn to fly and then join the Women Airforce Service Pilots to fly military planes and help the war effort. My dad, being sure I was too young to do this feat said, "Yes dear, now why don't you got out and ride your horse. I'm sure he could use some exercise". So instead, like a obedient daughter, I went out to the airport to find out about learning to fly."
Gayle Snell, WASP

ONE-OF-A-KIND WASP Gayle Snell passed away on August 26, 2009. She had been struggling with cancer, several surgeries, and had endured many invasive drug therapies. Even though Gayle lost her final battle, her life is an enduring testament to determination and patriotism, to a love of flying, a love of her friends, and a little bit of fly fishing.

Gayle M. Snell was born on December 16, 1923, in Pasadena, California to Loretta Graham Snell and husband, Frank. Gayle grew up spending her summers in Manitou Springs, Colorado, where her father owned the Cliff House Hotel and ran a limousine touring company.

Shortly after her mother died of a heart attack, Gayle's father discovered Gayle was taking flying lessons. With his support, she continued until she soloed at 17.

After being accepted into the University of California's aeronautics program, she quit school to enter WASP training in April, 1944. As Gayle writes in Betty Turner's 1997 "44-9 Classbook": "Never having been away from home, except for girl scout camp, living with five other women in a "bay" was certainly a new experience. It seems we all had to fight everything at Avenger, except each other. There were windstorms, dust storms, eternal heat, snakes (yikes!), trying to live through our instructor's swearing and yelling, food that was never worth the march to the mess hall (except when VIPS were on the field) and other classes screaming, "You'll be sorry". ...My baymates were, and still are the best people in the world. I believe we gave each other all the emotional support that it took to get us through the program and finally receive our Silver Wings."

Her time during training was marked by adjustments and her unstoppable determination to fly: "...how I loved those wonderful ships! I seemed to have had an affinity for low level flight and invariably landed with quite a bit of sagebruch in my undercarriage. Lordy, nobody ever told me you could get washed for that. Oh well, at least they never caught me looping telephone wires!"

Gayle and her class graduated and earned their silver WASP wings on November 8, 1944. Gayle's Army orders sent her to Independence Army Air Field, Independence, Kansas, where she flew as an engineering test pilot, flying BT-15's. After the WASP were disbanded, she ferried war surplus planes and eventually started an aerial photography business. After closing her photography business, she worked crop dusting, sold automotive parts, drove a taxi and played on a women's semi-pro baseball team. Finally, Gayle decided she wanted to get back to electronics. She worked for Bendix as a assembler then Lockheed Missiles in research and development. Gayle completed her engineering degree by taking classes at night and worked her way up from draftsman to Electrical Electronic Engineer, at Lockheed Missile, Lockheed Aircraft and Douglas, where she worked for 21 years.

After branching out into court reporting school--Galye became paralyzed and was told she had five crushed discs in her back. She spent the next seven years in traction and back braces before finding a doctor who was able to put her back on her feet.

In 1980, Gayle moved from Granada Hills, California to Colorado Springs, very near where she had spent her summers as a child. "Trout Haven" was where Gayle spent the last great years of her life, surrounded by trout lakes, pines and aspen trees. As she wrote in the W-9 book, " The quiet, the blue skies, the fluffy clouds, the gentle breezes, the birds, the squirrels, the chipmunks all convince me that this is the closest to heaven I've ever been."

Gayle is survived by her cousins Georgetta Cravuiota of Santa Barbara, CA, Sandy Goldberg of Loveland, CO and Joe Graham of Spokane, WA. Funeral services will be held Tuesday, September 1 at 2:15 at Fort Logan National Cemetery in Denver. A reception follows at 5:00pm, 1110 Garlock Lane in Colorado Springs. Contributions to the WASP are appreciated in lieu of flowers.

In September, 2000, we arrived for an interview in Gayle Snell's home in Colorado Springs, Co. Although I had spoken to Gayle several times by phone, nothing prepared us for our face to face meeting. 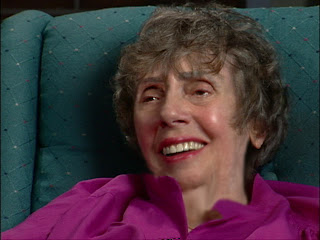 I wish I had had a camera rolling as we got out of the car, climbed the steps and first knocked on Gayle's door. When she cracked open the door, she saw my 'blue bag' and her eyes got very big. "What is that?"

Looking UP at Gayle, who seemed to be 10 feet tall thru the screen, "Well, I said gently, "you don't actually have to look at the camera, you're just going to have a conversation with mom." Mom stood there, looking very kind and smiling...."Oh, hell," said Gayle, "I guess I told you I would do an interview-, so come on in."

We did. Those first few moments were a little tense. In fact, we found out later that Gayle's roommate, Dell, had talked her into the interview. She thought it was important. Dell helped calm Gayle's blood pressure, and mom's first questions began to earn her trust. And then, sometime during those first moments, Gayle laughed. She threw her head back and just laughed. When she did that, it changed everything. I still remember. From that moment on, there was an instant friendship and an instant trust.

After the interview was over, she invited us up to TROUT HAVEN. 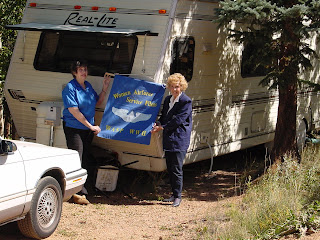 We drove up the mountain the next day, postpoining our trip home. I'm glad we did. I still have the photo of Gayle holding her "WASP BANNER" that WASP Shutsy Reynolds made for her. Gayle kept it in her trailer during the winter, but, when spring arrived, she traveled up the mountain and proudly unfurled her one-of-a-kind WASP Banner. It flew for many summers, marking the spot where the expert WASP fly fisherman was parked. Many summers.

In 2002, on the last day of the Tucson WASP Reunion, Gayle invited us out to the airport to see her take off 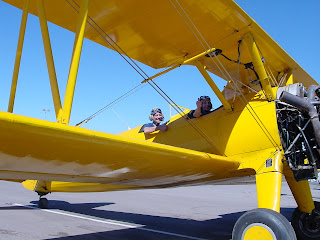 for Colorado Springs. Again, we postponed our trip home, and drove out to the airport. Again, I'm glad we did. The photos of Gayle, climbing in to the restored Stearman--putting on her helment and goggles, and her 'thumbs up' as they were ready to taxi, were worth the trip. You talk about sparkling from the inside out? Gayle Snell in that Stearman lit up the world that day.


She worked hard -- she achieved much -- she was a pioneer in many things and she was a loyal friend. As a part of our interviews, mom always asks each WASP, if they could say something to the next generation that might inspire them to do something they had only dreamed of-- Gayle answered. Listen. These words are for all of us:

"Anything you want to do, you can do it. Don't let people tell you you're not good enough. BE GOOD ENOUGH!" 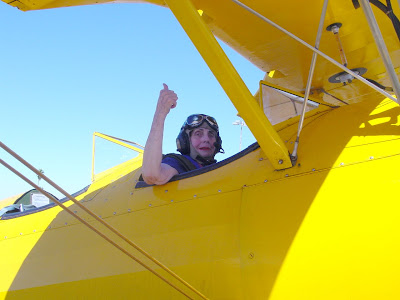 Respectfully submitted by Nancy Parrish
August 31, 2009
Posted by Wings Across America buglegirl at 9:10 AM No comments: