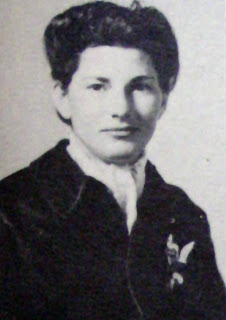 "I was born on November 8, 1917, on a farm near Crystal City, Missouri. While living in Crystal City and working as a stenographer, was attracted to the air when some men in town purchased a Piper Cub and arranged for an instructor from nearby St. Louis to give lessons.

In March of 1941, I had my first lesson and continued flying, earning my private and commercial licenses.

I was accepted in the Women's Flying Training Detachment program on February 15, 1943, at Houston, Texas, and was graduated from the program at Sweetwater, Texas on August 7, 1943, in class 43-4 as a WASP.

Was assigned to Air Transport Command (ATC) and reported to the 5th Ferrying Group, Love Field, Dallas, Texas, where I remained until the WASP were deactivated on December 29, 1944. I flew single engine trainer planes and twin-engine utility planes, the P-39, P-40, P-47, P-51, P-63, and checked out as first pilot in the B-25 and C-47 (the cargo version of the DC-3.)

After deactivation, I earned my instructor rating and instructed at Stephens College in Columbia, Missouri, and on a program at Oregon State College in Corvallis, Oregon, where I met my husband, Gerald Van Lom.

We were married in 1949, and lived in Portland, Oregon, and later moved to the Beaverton, Oregon area with our five children, William, Christine, Richard, Gretchen and Charles.

In Beaverton, I worked for Tektronix, Inc., an electronic firm, and retired after 18 years as a contract administrator for the service department.

I have been a volunteer in the emergency service department at St. Vincent de Paul in Portland.

Like so many WASP, Isabel gave back to her community and made a difference in her world.

A memorial Mass will be said at St. Cecilia Catholic Church, 5th and Franklin Street, Beaverton, at 11 a.m. Wednesday, Feb. 27. Recitation of the holy rosary precedes the Mass at 10:30 a.m. In lieu of flowers, the family suggests remembrances to the charity of your choice.

Posted by Wings Across America buglegirl at 9:03 AM No comments: