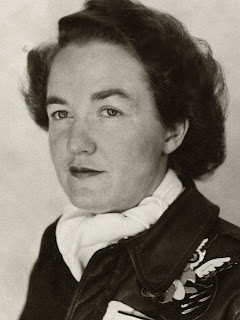 Elvira Griggs Cardin passed away Friday, Feb 14th. She was 95. Elvira "Baby" Griggs was born in Tacoma, WA., in 1913, the youngest of four children. Her future husband, Pat, was a year older, and lived just a block away. They were married in 1947, moved to CA., and lived in Lafayette for the next 60 years. Friday morning was warm and beautiful and Elvira had breakfast on her patio surrounded by the garden she loved, and slipped away by noon. This was an easy and peaceful transition. Elvira was a spirited and accomplished woman. She was an excellent equestrian, a Women's Air Service Pilot in WWII with over 2000 hours of flight time in heavy bombers, an enthusiastic supporter of the Lindsay Museum and a devoted wife and mother. As a young girl riding her favorite pony named Tony, she famously walked him through the front door of her parent's house into their living room to protect him from the teasing of the neighborhood boys. A WASP pilot, she loved flying the responsive AT-6 trainers and twin-engine B-26 bombers, but pronounced the four-engine B-17s "slow and ponderous." A number of her total flying hours came on trips between the base at Sweetwater and Corpus Christi on the Gulf. The base commander loved fresh crab, and Elvira was always ready to fly to the coast and return with his delicacy strapped into the front cockpit of her AT-6. Elvira and Pat had two sons, Kim and Chris. Their younger son, Chris, died in a plane crash in 1983, and Pat passed away earlier this year in February. Elvira is survived by her elder son Kim, and her adored granddaughter, Jessica. Gifts in Elvira's memory would be gratefully received by the Lindsay Museum in Walnut Creek. There will be a casual memorial gathering celebrating the life and love of Elvira and Pat on Nov. 29th from 4pm-6 pm at the Orinda Country Club. You may have tangible wealth untold; Caskets of jewels and coffers of gold. Richer than I you can never be -I had a mother who read to me. -- Strickland Gillilan (1869-1954)

After attending high school at Rosemary Hall in Greenwich, Connecticut, I attended Pomona College in California and graduated from the University of Washington in 1935, majoring in French. After graduation, I went to New York City and worked for Mademoiselle magazine. In 1937, I traveled to Berlin, Germany then to France.

I started to fly and get into the WASP. At that time no civilians could fly near the Coast. I moved to eastern Washington and flew to get 100 hours and went into the WASP--class 43-8.

After graduation, I was stationed at Dodge City Army Air Base, Dodge City, Kansas, at a B-26 school. I towed targets in the B-26, then to Hondo Army Air Base in Hondo, Texas, and to Pueblo Army Air Base, Pueblo, Colorado. I flew other planes like the AT-17, AT-6.

In 1947, I married a man I had known all my life, Pat Cardin, and we moved to Lafayette, California. We had two sons, Kim and Christopher.  We have lived in the sam house for 53 years. One of our sons lives in Layafette with our only granddaughter, jessica, age 13, who plays soccer, basketball, rides horseback and is a straight "A" student. She also is in 4H and takes care of six rabbits. I am on the board of the Oakland Museum and on the board of Lindsey Wildlife Museum in Walnut Creek, California.

I still play tennis, enjoy bridge, and attend the San Francisco Symphony, but most of all; I am interested in my garden."from p. 256 "Out of the Blue and Into History" by WASP Betty Stagg Turner.

Posted by Wings Across America buglegirl at 3:47 PM No comments: