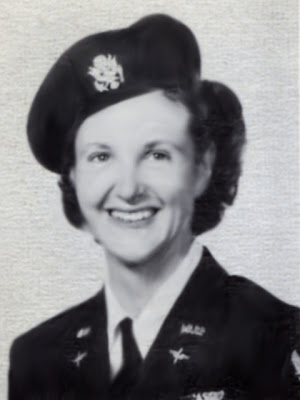 Nan was born October 24, 1922 in Oakland, California to Irving and Harriet Hazeltine.  She grew up with a family legacy of pioneers and patriots.  Her grandfather was a US Marshall, and her grandmother, who had survived polio, overcame her disability and trained horses. Her dad  served as a Sergeant in an aero squadron in WWI.

As Nan was growing up, she said that she proudly watched her dad, who was the Drum Major for the VFW,  march in every parade in Oakland.

After graduating from Westlake, Jr. High School, Nan entered University High, but she finished her last year and half of high school in Oshkosh,  Wisconsin, while staying with her aunt and uncle.

While helping her cousin  study for his CPT ground school test, Nan said her curiosity about navigation and  weather exceeded the answers in his textbooks, so  he questioned her:

Nan eyes sparkled when she recalled about learning to fly:   “The very first lesson I ever had was the very first time I was in the air, and, oh, that was it!  From then on, forget anything
else.  I wanted to fly!  That’s what I did!”

After high school, she continued flying and worked with her uncle and grandfather in the family sign shop.

After America entered World War II, all civilian flying was moved Inland, away from the California coast line,  at which point Nan moved to Quincy, California so she could continue to fly.   She stayed with a farmer and his family and took a job with the National Forest Service.  As the men in the Forest Service were drafted, her job description increased,  so she eventually became what she termed  a ‘Jack of all Trades.’ 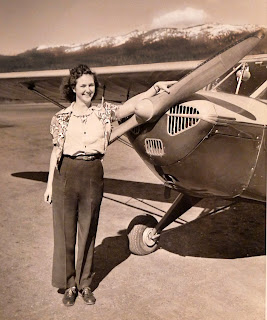 While Nan was working with the Forest Service,  a fire broke out nearby and the fire spotters in the fire towers couldn’t see it.   The Fire Control Chief asked her to take him up in her airplane to take a look.  Because there was no radio in the plane,  Nan flew close to treetop level, so the fire control boss could point the crews on the ground in the direction they needed to go.

In 1944,  she applied and was accepted into the Army Air Forces Pilot Training Program to learn to fly military aircraft so she could fly for her country as one of the Women Airforce Service Pilots.   She quit her job, paid her way to Texas, and entered training as a member of class 44-6.   Of the 136 young women pilots accepted into the class, only 72 successfully finished the seven months of training and graduated.    On August 4, 1944,  Nan received her silver WASP wings and her Army orders to report to Merced  Army Air Field in the San Joaquin Valley of California.

At Merced, she flew as an engineering test pilot of BT-13’s and AT-6’s (her favorite aircraft) until the WASP were disbanded on 20 December 1944.

Less than two months after the WASP were deactivated, Nan joined the Navy and  completed the  training to become a WAVE.   She was then assigned to the Naval Air Station,  Pensacola, Florida as a Control Tower Operator.  She was honorably discharged in June of 1946.

From Florida,   Nan  eventually made her way to Lockhaven, PA, where she picked up her  mother and a Piper Cub and flew them both back to Oakland.   She then started a free lance typesetting business.

In 1950,  she married Kneeland Edward Fuller. Together, they started a successful lithography business.  During the next five years they added five wonderful children to their family.

After the deaths of her father and brother, Nan retired in 1988. She packed up her mom , and with her pickup truck she pulled a 5th wheel travel trailer across the country for the next five years,  just enjoying the beautiful scenery of  America.   When her mother turned ninety, they found the perfect spot to settle down, ending up in the middle of the beautiful Hill Country in Ingram, Texas.

When Nan’s mother passed away at the age of 101, Nan stayed in Ingram, raising and caring for her menagerie of dogs.

In early 2012, Nan left the Texas Hill Country to return to her California roots to be near her children. She passed away on August 9, 2012 in El Cerrito, California.