"She was a beautiful woman with chestnut hair, a rich, warm smile, and deep blue eyes that displayed brilliance of mind, tenacity and courage.  She would conquer and live her dreams.  She would climb into the heavens without fear.  She would fly.  She was born and lived as a gifted, independent, extraordinary bird - a WASP (Women Airforce Service Pilots).  On July 26, 2012, Gertrude marcia Wenzel Milner, 91, took her last flight home to Our Father."
reprinted from the official obituary 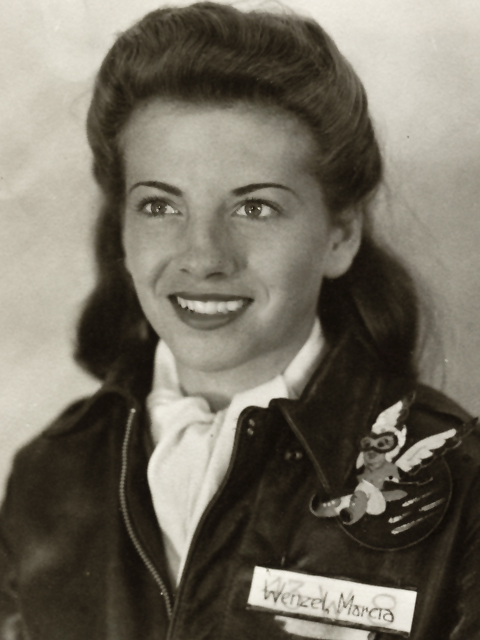 Gertrude Marcia Wenzel was born on October 8, 1920 in New London, Connecticut.  Her love affair with flying began at age 12, when her father took her to an airfield in Bridgeport, Connecticut.

While she was still in high school, she began taking flying lessons at Norwalk Airport, which was near her home.  By 1939, she had earned her private pilot’s license and a seaplane rating.
During World War II,  Marcia learned about the newly created Army Air Forces training program to train qualified women pilots to fly military aircraft to relieve desperately needed stateside AAF male pilots for combat.   She applied for the program, was interviewed in New York City, and was accepted to enter with class 43-8.
Marcia paid her way to Texas and, together with 97 other women pilots, arrived at Avenger Field to enter the training.  She was one of only 48 in her class who successfully completed the six months of training.  On December 17, 1943, they graduated and received their silver WASP wings--the first wings to include the lozenge/diamond design in the center.
After graduation, Marsha was assigned to Chico Army Air Field in Chico, California as an engineering test pilot.  Later she was transferred to Merced Army Air Field,  California, where she continued as an engineering test pilot.
Later, she was transferred from Merced to Las Vegas Army Air Field in Nevada, where she transitioned into flying B-26’s.  She was then sent to Tactical School in Orlando, Florida, for pressure tank tests, gas warfare, and jungle survival school. During her service as a WASP, she flew the PT-19, BT-13, AT-6, UC-78, B-26 and  BT-17 co-pilot.
After the WASP were deactivated on 20 December 1944,   Marsha worked as a flight instructor in Albany, New York and ferried aircraft for Reconstruction Finance Corporation.  She continued flying in her BT-13 and later her Curtiss Fledgling.  She  maintained her seaplane rating for a Cessna on floats.
Marcia married Philip H. Milner Sr., a business banker.  Marcia and Philip were married for over 40 years,  prior to his passing in 1990.  They had one son, Philip.
In recognition of their service during WWII, Marcia and her WASP peers  were  honored by the United States Congress in 2010 with the Congressional Gold Medal, the highest award Congress can bestow on civilians.
Marcia was a resident of Essex, Conn,  Bedford, N.Y, and Ocean Reef, Key Largo, Fla.  She then lived for over 47 years in Weekapaug, R.I.
Marcia was beloved by her family and is survived by her son, Philip H. Milner Jr. and wife, Pamela Milner, Newport Beach, Calif.; her granddaughter, Jessica Milner, Newport Beach, Calif.; her grandson, John Milner and wife,  Kristin Milner; her great-granddaughters, Amanda and Clara Milner, Corona, Calif.; and her brother, Clarence "Bill" Wenzel, Huddleston, Va.
A memorial service was held on Tuesday, Aug. 7, 2012, at 10:30 a.m. at Christ Church, Westerly,  with interment in the adjacent Memorial Garden.
Memorial donations may be made in Marcia’s  honor to Wings Across America, 1620 S. 9th St., Waco, Texas, 76706  or the National WASP WWII Museum, P.O. Box 456, Sweetwater, Texas, 79556.

Posted by Wings Across America buglegirl at 1:54 PM No comments: