"After seeing the July 19, 1943 issue of Life Magazine, and the article on the pilot's training at Avenger Field, I decided this was the war effort I wished to pursue. ...   After my first lesson, I was hooked!

WASP Doris Irene Boothe Wanty, age 95 of Oakdale, CA peacefully passed away on January 6, 2018, in her home.
She was born October 18, 1922, in Yosemite Valley, California the daughter of Clyde Dudley Boothe (One of the first park rangers in Yosemite), and Mildred Rowena Palmer Boothe of Modesto, California. 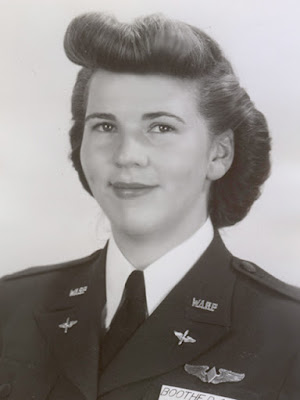 Doris' family moved to Modesto in 1929, where her father started Valley Tractor and later went into cattle ranching. She graduated from Modesto High School in 1940 and received her AA in Music from the College of the Pacific in 1942. There she was active in Epsilon Sigma Lambda Sorority: later nationalized and was initiated into Delta Gamma.
In August of 1943, after seeing an article in LIFE Magazine about the WASP, (Women Airforce Service Pilots), she obtained the required 35 hours of flight instruction in Independence, CA, She applied and received orders to report to Avenger Field, Sweetwater TX for the WASP training program. Doris was one of only 49 graduates of the original 114 accepted into class 44-W-8.  After graduating in October of 1944, she was assigned to Waco Army Air Base, TX, where she slow-timed engines, tested repaired or overhauled planes, transported military personnel and flew BT-13's and AT-6's.
After the WASP were deactivated on Dec. 22, 1944, she returned to Modesto and then worked at the Oakland Airport as an airway traffic controller.
In the summer of 1949 touring Europe, she met the love of her life Merritt (Mike) Wanty, from Oakland, CA, in Florence, Italy. They were married September 24,1949 in Modesto and lived in Dhahran, Arabia where Mike was employed as a geologist with ARAMCO. In the spring of 1951, they returned to Oakdale, CA where they have lived on their cattle and almond ranch and raised their four children. 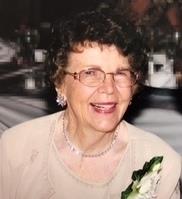 Her greatest joys have been her children, grandchildren, great-grandchildren and her friends, including the same bridge club for 60 plus years, spending summers at their cabin in the mountains, and playing the piano. She was a 4-H leader, a member of McHenry Museum and the McHenry Mansion, Omega Nu Sorority, and Geneva Presbyterian Church in Modesto.
In 1977, Doris including all WASP were granted Veteran status and in 2009, they were awarded the Congressional Gold Medal. Later in life, she and Mike traveled on several cruises and enjoyed WASP and Mike's Navy Destroyer reunions.
Doris is survived by her husband of 68 years, Merritt (Mike) Ward Wanty, her daughter's Diane Ravanesi (Pat) Western Springs, IL, Christine Sutton (Bob) Blossom, TX, Carol Ehrler (Bill) Modesto, and son, Merritt (Jake) Wanty (Victoria) Oakdale, a loving brother Everett Palmer Boothe (Charlotte deceased), 12 grandchildren, 10 great-grandchildren.
The family wishes to thank all her dedicated, loving caregivers she has been blessed with.
Graveside services will be January 29, 2018, 11:00 am at Lakewood Memorial Park, Hughson, CA, followed by Memorial Services at Geneva Presbyterian Church, Modesto, CA.
In memory of Doris Wanty, please consider making a donation to Geneva Presbyterian Church, 1229 E Fairmont Ave., Modesto, CA 95350 or Nat'l WASP Museum, 210 Avenger Field Rd., Sweetwater, TX 79556.
respectfully edited and reposted:  www.cvobituaries.com

*Quote by Doris  from p480 "Out of the Blue and Into History" by WASP Betty Turner
Posted by Wings Across America buglegirl at 12:59 PM No comments: