“Never let go of your dreams.  If you have a dream, there’s no reason it can’t be fulfilled, you’ll find a way.  It’s possible, because I didn’t have much...I was a poor student and managed to fulfill my dream.  I wanted it so bad, I found a way.
Flying was freedom and I loved flying.”
/s/Betty Jo Reed 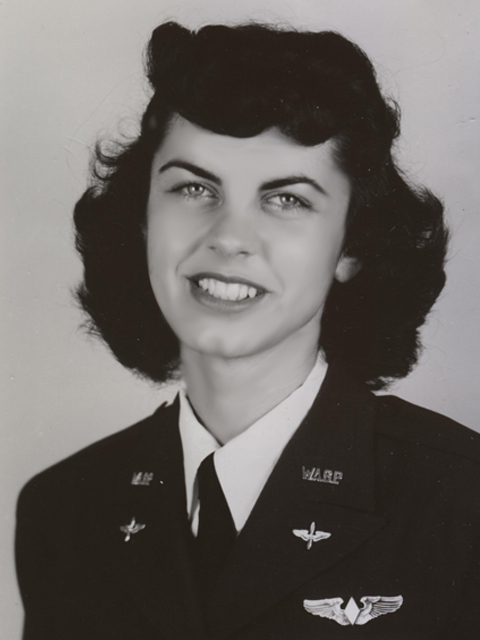 Betty Jo was born June 20, 1923 in Sherman, Texas to John Nicholas Streff and Nellie Ruth Dilworth Streff.  Her father was a general contractor and supervisor for the Georgia Marble Company, where his work created opportunities for the young family to travel. After Betty Jo was born, the family moved from Texas to Oklahoma City and, eventually, settled outside Chicago, Illinois.

Betty Jo's life-long love of flying began when her dad shared his own love of aviation by taking the family to airshows, sometimes in a farmer's field, to watch the early barnstormers.   She remembered the planes flying by upside down and watching the wing walkers and the parachutists.

She remembered sitting in her dad's lap at age four,  as he would read her news of Charles Lindbergh and his trip across the ocean.  From then on, every time she would hear an airplane fly over the house, she would run outside and yell,  “Hi, Lindbergh!”

When she was six, Betty Jo's father paid $1 for her first flight in a Ford tri-motor at the Curtis-Reynolds Airport air show in Chicago.  As she later recalled, it was 'love at first flight:'    "I remember feeling free and happy and loving the whole experience.  From that point on, I knew that I wanted to fly.”

A few years later, she skipped school to watch the airplanes.  She took her bike and, instead of turning left to go to the junior high school, she turned right-- and rode nine miles out to the airport.  She spent the day standing near the runway, watching the planes take off and land.  Even though she never did it again, the memory lasted a lifetime.

Thoughout her schooling, Betty Jo struggled with an undiagnosed learning disability.  However, by the time she entered high school, she found a way to overcome every challenge with hard work, determination and a curiosity to know ‘why.‘   She became a pitcher on the girls baseball team-- a team so good, they beat the boys team.   In high school, she had a talent for art and soccer, showing up after school to play with the boys.

When America entered World War II, Betty Jo put her plans for attending the Chicago Art Institute on hold, because so many of the instructors had signed up for military service.  She went to work for Marshal Fields and began taking flying lessons so that she could ‘do her part.’  It took half a week’s salary to pay for one hour of flight instruction with instructor Willie Clark.  Her first lesson was in a J3 Cub-- on skis.

In 1943, she was hired by Douglas Aircraft and went to work in the tooling department. Eventually, she was promoted to cockpit installation.  While at Douglas, she saw a Life Magazine with a girl pilot on the cover.  When she read the article about WASP training program, she was thrilled and ready to sign up.

Because Betty Jo’s job at Douglas was considered ‘essential’ for the war effort, she had to get special permission to even apply for the training program.  After permission was granted, she was interviewed, passed all the required tests and was accepted for training as one of the ninety-eight women pilots in class 44-W-7.

She paid her way to Sweetwater, Texas and arrived during one of the coldest winters in West Texas history.    Betty Jo described herself as “tall and skinny,” when she entered training.  On that  first awkward day at Avenger Field, one of her classmates affectionately gave her the nickname,  ‘Birdlegs.’  That nickname and the instant, comfortable friendship with her classmates stayed with her throughout her life.

On September 8, 1944, after seven months of training, Betty Jo and fifty-eight of her classmates graduated and received their silver WASP wings.   She received Army orders to report to the Eastern Training Command, Columbus Army Air Field, Columbus, Mississippi, where she flew Beechcraft AT-10’s and BT-13’s as an engineering test pilot, ferry pilot and administrative pilot.

On Dec. 20, 1944, when the WASP were disbanded, Betty Jo paid her way back home and returned to a job at the Douglas C-54 plant as a test pilot.
When an automobile accident temporarily grounded her, Betty Jo married Carl W. Reed.  They were blessed with two  boys and two girls.

In 1957, the young couple opened the first McDonald’s franchise in Colorado--which was the third McDonald’s restaurant in the U.S.  A year after the birth of their fourth child, Betty Jo began flying again.  She earned her rating to fly Lear Jets and the King Air.   As their family business grew to ten McDonald’s,  eventually, she became a corporate pilot.

Betty Jo competed in six Power Puff Derbies, winning a “Best in Class” from Flying Magazine.  She was a member of The Ninety-Nines, Inc., The Arizona Wing of the Commemorative Air Force, WMA (Women  Military Aviators) and the Air Force Association.   She served as President of the Phoenix Wing of the American Aviation Historical Society and was a docent at the Champlin Fighter Aircraft Museum in Mesa, Arizona.

In 1999, Betty Jo was inducted into the International Forest of Friendship and in 2010, she and her sister WASP were awarded the Congressional Gold Medal, the highest civilian honor Congress can bestow, for their pioneering military service during World War II.

I met Betty Jo Reed for the first time in November of 2001, when mom & I traveled to Arizona to interview WASP for our Wings Across America project.  Betty Jo had agreed to meet us at one of her favorite places, the Champlin Fighter Aircraft 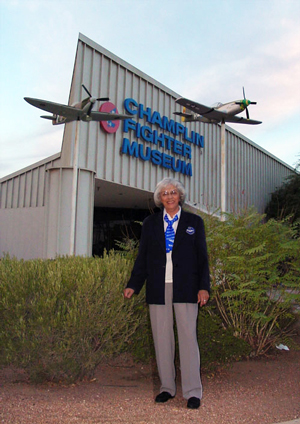 Museum.  She was almost more excited about showing us all the wonderful airplanes than she was in talking about her life.  She was kind and so generous with her time, never complaining that we continued talking through lunch and into the afternoon.  In fact, we rolled tape until the museum staff had to lock the building up.  It was a delightful interview.

Betty Jo was a WASP who traveled to every WASP convention, the huge airshow at Oshkosh, to the Frontiers of Flight Museum when the WASP were honored on Veteran’s Day, 2009 and to Washington, DC  when the WASP were awarded the Congressional Gold Medal.   She was always upbeat, despite the health challenges and the battles to survive over the last few years.  She never gave up and always lifted those who were concerned for her.

In September of 2012, Betty Jo called to see “what was going on.”  We chatted for a few minutes and then I asked her how she was.  That is when she shared that she was ‘not doing good,” and then immediately changed the subject to ask how mom and I were doing. 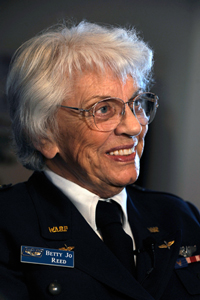 Her question was so typical of this sweet lady, who has touched so many with her courage and her cheerful spirit. She spent only a moment on herself and then she asked how we were.  When I asked a few more questions, she shared her sad news about her fight with a second, much more deadly cancer than the one she successfully battled not long ago.
During our interview in 2001, we asked Betty Jo, other than her family, what was the one thing she was most proud of?   Her reply:  “I’m most proud of my flying accomplishments.  I think that if you were to talk to some of the men that I flew with as a corporate pilot, they were surprised and proud.  In fact, they had bets on how long I’d last.  It made me proud of what I was doing.  I hand’t been very proud in my schooling--didn’t have much else to measure other than that.  I was very proud of my ability to fly.”
It was an honor to know Betty Jo...to laugh with her and listen to her stories.  She will be missed by all of us whose lives were touched by her gentle and encouraging spirit.  God bless you all.

Posted by Wings Across America buglegirl at 9:42 AM 4 comments:

"I was born at the right place at the right time, and for my part,
it was a fantastic experience.  I think I was lucky.
I probably was in the best spot I could possibly have been.
The Good Lord took care of me all the time I was there
and I got through it all right and my life has gone on from there.
I think it was a tremendous opoprutunity
that I was given and I'm thankful for it."  *
/s/ Barbara London, WAFS 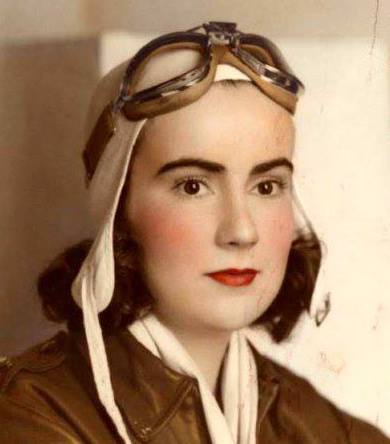 Erickson, who lived most of her life in Long Beach and operated an aircraft sales business at Long Beach Airport, had moved to Los Gatos to be close to her sister.

"She has been surrounded by family and friends and the one thing she wanted was to be able to stay in her own home, be in her own bed, and be with the people she loved," her daughter, Kristy Ardizzone, said. "All that happened just the way she wanted and she passed with dignity and grace surrounded by lots of love."

In 1940, London (then Erickson) became the first woman to be recruited into the Civil Air Patrol program at Long Beach's Daugherty Field. During World War II, she was appointed as Squadron Commander for the 6th Ferry Command.

The young pilot was qualified to fly all pursuit planes, the medium-size bombers A-20, A-26 and B-25, the cargo craft DC-3 and C-54 and the mighty B-17 Flying Fortress bomber.

Among her wartime feats in the ferrying service was flying four 2,000-mile trips in five days. She was the only woman during the war to be awarded the Air Medal for her service.
In 1948, she was commissioned as a major in the Air Force Reserve.

The  Woman's Airforce Service Pilots (WASPS) was disbanded at the end of 1944 after complaints from male pilots that women were taking flights and jobs. In 1971, Congress passed legislation to give veteran status to WASP fliers, and in 2010, President Obama awarded Congressional Gold Medals to surviving WASPs, including London.

"She was so thrilled that all the gals finally got their acknowledgment when they received the Congressional Medal," Ardizzone said. "It was all about them."

Barbara met her husband, Jack London Jr., during the war when they were both pilots. After their marriage, they operated United States Aviation, a flight school, until the Korean War. He preceded her in death by 40 years and one day.

London would go on to found and operate Barney Frazier Aircraft, Inc., in Long Beach with her younger daughter, Ardizzone. Her older daughter, Terry London Rinehart, is a commercial pilot.
London also was active in the Powder Puff Derby, an airplane race series for female pilots. She served as secretary of the organization and raced herself for a number of years.

In 2006, a street near the airport was named Barbara London Drive, and she served as both an official and unofficial community advocate for the Long Beach Airport for years. She figures prominently in the airport's history exhibits along with other great Long Beach-based female pilots, including Gladys O'Donnell and Kay Daugherty.

There will not be a formal memorial or service, following her wishes, Ardizzone said.
"She just wanted people to know how much she loved being a part of the Long Beach community and especially the LB airport," Ardizzone said. "She was such an amazing mentor and supporter and touched so many people's lives."

v/r article respectfully reposted by Wings Across America as written