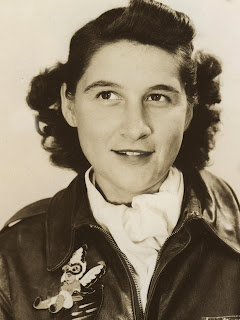 Mary Emeral Drummond was born in Rochelle, Illinois April 3, 1920.  Her family moved to Southern California in 1925 and started the San Fernando Valley chicken ranch on which Emeral, her sister and her brother grew up.

She graduated from Van Nuys High School in 1937 and attended the University of California at Los Angeles, graduating with a Bachelor of Education Degree with a concentration in Commerce in 1941.  After working in San Francisco and taking a course in meteorology at the University of California, San Francisco she moved to Phoenix, Arizona to learn to fly.

She entered WASP training in May, 1943 and completed training that year with class 43-W-7.  She was assigned as a pilot at the navigation training base in Hondo, Texas.  At Hondo, she logged about 800 hours in the AT-7 twin engine Beech aircraft.


After deactivation she became an air traffic controller for the CAA at Sky Harbor Airport in Phoenix.  After the war she operated a small business in the Los Angeles area and then was accepted as an accountant and auditor for the City of Los Angeles.  During her time with the city she continued her education at the University of Southern California, receiving a Masters Degree in Public Administration in 1965.

During the Korean War she was recalled to her country's service as a 1st Lieutenant in the United States Air Force.  She was assigned to McClelland Air Force Base in Sacramento, California and to Wright Patterson Air Force base in Dayton, Ohio.

She especially loved her WASP relationships and continued to travel to WASP reunions and events around the country throughout her life.  Her home, on the side of a Los Angeles hill, was always full of flying friends and WASP memorabilia.

After retirement she became a sailor, an avid golfer, and continued her travels around the world visiting WASP friends as she did so.