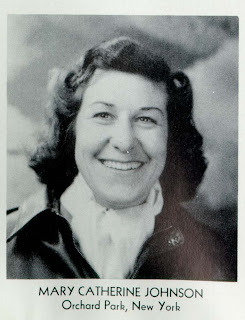 Mary Catherine Johnson was born on November 10, 1916 in Madison, Wisconsin. She passed away June 4, 2008 of congestive heart failure and cancer.

In her memory, the following , from Betty Turner's OUT OF THE BLUE and INTO HISTORY" allows Jary to tell her own story--in her own words.

"I got interested in flying as a member of the glider club at the University of Michigan, where I flew a single-place glider, both at Ann Arbor and at the international glider meet at Elmira, New York, in 1937. After moving to California, I took airplane lessons, earned a private pilot's license, and accumulated 60 hours of flying time.

The flying training program headed by Jacqueline Cochran required 300 hours of flying time. Dorothy Nichols and I quit our jobs and drove to Fort Worth, Texas, to finish our flying time because civilian flying was banned in California within 300 miles of the coast after Pearl Harbor. Two weeks later Miss Cochran's office called us at our motel and asked us to be in the second training class, 43-2.

After graduation, I was assigned to Romulus Ferry Base, where I ferried trainers and P-39's, P-40's, P-51's and P-63's, from factories to training bases or locations for overseas delivery. I also flew the L-5 and PT-26. Dorothy was stationed at Long Beach, California, and was later killed in a P-39.

After deactivation, I joined the Red Cross and worked on American bases spread throughout India as what was then termed a "club worker." I met my husband in India and got married and had three daughters right away. I was afraid enough of airplanes that I didn't want to be up in the air when I had little kids I was responsible for. I was a housewife for 12 years before I was divorced and had to work.

In 1982, after not flying for 35 years, I took flying lessons and reactivated my commercial license.

As a pilot for the humanitarian group Angel Flight, I now transport ambulatory patients who are in need of medical attention but unable to pay for transportation. I am also a coordinator, booking the missions. I get pilots for the missions, but you can't always get a pilot right away. They're busy guys, often out of the office. But their response is so possible. I am also a member of a flying club and own equity in two Cessna-172s.

I consider my greatest achievement to be the mother and grandmother of productive children and four grandchildren, and four great-grandchildren; to have been responsible for the education of two daughters and two sons-in-law in the value of freedom and some of the means of its implementation. If our civilization ever recovers from its current degeneration, they will be in some small way partly responsible for it."

from "Out of the Blue and Into History" by Betty Stagg Turner. P. 53.

Services will be private—

Jary’s legacy will go on -- in the lives of those she touched with her service, her dedication and her love.
This WASP made a difference in many lives…and she will be missed.


Posted by Wings Across America buglegirl at 6:26 PM 2 comments: