The past ninety years have been happy, eventful and exciting for me. I was born during the flu epidemic in St. Louis, survived the Great Depression, the War, etc. I am blessed with a wonderful family and good friends. Been around the world and have done many things, hang gliding, logged fifteen minutes in the blimp (airship), flown a helicopter, ballooning, finally won an air race, did the speed of sound on the "Concorde".

One of the highlights of my life was becoming a W.A.S.P., the flying, the check rides, the zoot suits are fond memories.

I am now on my Final Approach, my ETA is uncertain, depending on mission control, I hope that I make a smooth landing, and at the terminal gate, I will put out my hand and truly touch the face of God.


Dolores Meurer Reed “slipped the surly bonds of earth and touched the face of God” (High Flight) on February 20, 2011 having lived her 93 years following her dreams. 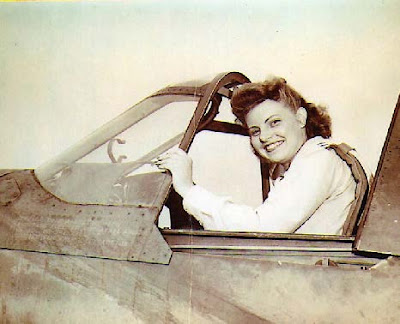 Born in St. Louis, MO on February 12, 1918, Dolores experienced her first airplane ride in a Stinson plane at the age of 5. From that moment, a passion for flying was sown, and throughout her life that passion grew and never faltered.

During the Depression she earned money for flying lessons by teaching ballet, dancing being her second passion.

When the call came out in WW II for women pilots to help the war effort by ferrying planes, parts, and military officers around the country, Dolores applied, was accepted, and left St. Louis for Sweetwater, TX, for training to become a WASP, Womens Airforce Service Pilots.

As a member of Class 44-1, Dolores said that receiving her wings in 1944 was the best day in her life, surpassed only by her wedding day to Robert Guy Reed, and the birth of her children, Robert, Kathleen, and Michael.

The war over, Dolores married Bob and their first child was born. Her passion became the family and motherhood.

In 1965, she took up flying again to participate in women’s air races. With some fancy flying and experience acquired from handling war birds, Dolores and her co-pilot won first place in the Long Beach to Baja Race in May 1982.

Bob Reed died in 1974 at the age of 59, leaving Dolores to fly solo in life for a time. She took over the duties of corporate secretary for a family owned land trust company in New Mexico. She continued to travel extensively and experienced the many cultures of the world.

Dolores was a woman of determination but the best of who she was could be seen and felt through her kindness, generosity, loyalty, and her incredible sense of humor and joy for life.

She will be greatly missed by her 3 children, her companion of 25 years, Carl Bliss, 5 grandchildren and 4 great grandchildren, extended family, and her many friends.

Click to see the original posting online and the wonderful family photos at El Camino Memorial.
Posted by Wings Across America buglegirl at 8:50 PM No comments: