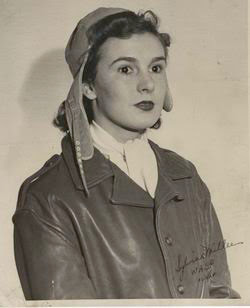 In memory of this special WASP, who passed away on August 10, 2009, I share this story, written a few years ago by Jennifer Callender, Staff writer for the Bennington Banner. It has served as the centerpiece for a page that was published by Sunny's daughter, Cindy Weisner, that she re-titiled
"Sylvia's Story"

In 1944, Sylvia Miller Burrill - "Sunny" was a young woman with a heart for her country and her head in the clouds-literally. Burrill was one of a unique group of women pilots during World War II known as W.A.S.P. (Women Airforce Service Pilots). These women, the first female pilots ever to fly military aircraft for the United States towed targets for the men to practice shooting at with live ammuninions and also transported non-flying officers, ferried new aircraft to their destinations, flew tired, worn out planes to repair depots and then flight tested the repaired planes, leaving male pilots free to satisfy the increasing demand for combat missions.

Nearly 63 years later, Burrill, now 83, can be found occasionally helping her daughter Cindy and son in law, Jim who own and operate a summer ice cream stand. She also spends her days reading books and tending to her flower gardens and baking treats for her many grand and great grandchildren. A wall of memorabilia tells a story of adventure and courage the belongs to the past of the tall, graceful dark eyed beauty. Although she has not piloted a plane for about 20 years, Burrill still takes to the skies at any opportunity. " My daughter Cindy has kept me flying with gifts of rides in various aircraft, helicopters and gliders" Burrill said. "In 1999 we went soaring in Stowe, and visited many old haunts and in 2007, we got a ride on a B-24 from the Collings Foundation. What a great time we had!

Born in Liverpool England, Burrill moved to Connecticut with her parents and three siblings when she was seven years old. After graduating high school in 1941, she found employment as a fashion show model for the D.M. Read company in Bridgeport, Ct. In 1943 Burrill was living in Stratford, Ct. and already an "enthusiastic flight buff". She and her friends watched Igor Sikorsky's flying boats soar down the Housatonic river into Long Island sound. The large airplanes, which held up to 100 passengers, were designed for Trans-Atlantic flying and could land in the ocean when necessary. She began to fly as a member of the Civil Air Patrol (C.A.P.) in 1943. During World War II flying was prohibited within 60 miles of the coast, so Burrill learned to fly out of a farmers field in Wingdale, N.Y. She and her friends would "chip in" their gas coupons, if they had any, to fuel their flights. Burrill's parents encouraged her lofty pursuits. One of her friends had a motorcycle and sometimes she rode to the field with him. "It didn't phase my parents that I was going back and forth to New York on the back of a motorcycle" she said. "They really were very cool about (my flying) - very supportive - which was great. In August of 1943, the W.A.S.P. was organized under the direction of Jacqueline Cochran and the minimum age for pilots was dropped to 18 years 6 months.

Burrill at 19, applied and was accepted into the class of 44-W-6 in January of 1944. She went to Sweetwater, Texas for Flight school training at Avenger field stopping off to see her boyfriend in Georgia. Burrill had never been further from home than a train trip to New York City, she said. Burrill's high school sweetheart, Cedric 'Ric' Joslin graduated from flight school and while visiting her in Texas proposed marriage. They were married in the only all W.A.S.P. formal military ceremony at St. Stephen's Episcopal church in Sweetwater, Texas and Joslin left to continue his pursuit flight training and then ship overseas. Shortly afterwards, Sylvia got an infected wisdom tooth and was sent to the infirmary to await the once a month visit from the base dentist. She was afraid she would get washed out if she got too far behind and was granted a request to go to a local dentist in Sweetwater to have the tooth pulled. She lost one week of training and was washed back one class to 44 W-7. Flight school was a challenge for the young women. The "washout" rate was about 40 percent according to Burrill. Of the 20,000 women who applied to enter the W.A.S.P, only 1,830 were accepted into the program and 1,074 of these brave women completed the seven months of training to earn their wings. "Every day was a struggle with hard courses. We all thought we'd wash out at any time," Burrill said. "We managed to get through; we perservered. We just thought we were lucky." "Every test we thought we wouldn't pass. Then we'd find out we were lucky enough to pass and oh, what a relief that was!" Burrill graduated with her silver wings on September 8, 1944. She returned home on leave and received "the dreaded telegram" informing her of her young husband's death. He had been killed when his plane crashed in Corsica, Italy on September 6, 1944, two days before her graduation.

Burrill reported for duty at Enid Air Base in Oklahoma where she did engineering test flights and transported non-flying officers to their destinations. One flight she said she remembers round most was a trip to Champaign-Urbana, Illinois, to drop off a passenger. "I was shocked," she said. "I got on the ground and he loaded me up with booze to fly back to the officers club at Enid." Oklahoma was a "dry" state at that time, she said. Planes being repaired needed to be tested. After a wing or a landing gear was replaced, the W.A.S.P took the planes up before the cadets flew them. They would test them out through slow flight and a series of spins and acrobatics to make sure they were air-worthy. "It was a matter of taking them up and wringing them out," Burrill said. Another W.A.S.P, Abby Quinlan and Burrill and fourteen male instrument instructors from Enid ferried PT-17's, PT-19's, and BT-13's to Mustang field in El Reno, Oklahoma. At the insistence of the men we flew formation ( Which is wing tip to wing tip and we were not supposed to be doing!) They were a bunch of would be hot shots! Burrill smiles. The W.A.S.P. were among the first to fly the B-29 when it was put into service. This was the aircraft used in the bombing of Hiroshima. "Paul Tibbetts taught our girls how to fly it because the men were afraid of it," Burrill said. "The women pilots took the guys up and after they landed, Paul Tibbetts introduced his B-29 pilots to the men. The guys said: if the women can do it, so can we and overcame their fear."

When the male pilots began returning from overseas, the W.A.S.P. were not needed any longer. They were disbanded on December 20, 1944. Burrill returned to the Bridgeport Civil Air Patrol and became Squadron Commander. The government gave them a PT-17 and a BT-13 to use in search and rescue flights. She also applied to be a test pilot for the F4U Corsairs which were being built at United Aircraft and being tested at Bridgeport Airport, but only male pilots were accepted. Instead she was given a job in operations and kept the BT-13 at Bridgeport, flying it between there and a small airport in Monroe until it was grounded, because she wore it out! She met some very interesting people including Charles Lindbergh and Pappy Boyington, as well as some of the test pilots some who became lifelong friends. 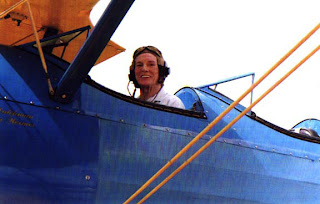 Burrill said she fell in love with Vermont on a skiing trip in 1945 with a group of W.A.S.P. and finally moved up from Connecticut in 1968. She spent many years in the Mount Snow area, and with her daughter, Cindy, owned a few different businesses all of which were successful. She married Robert Reich in 1946 and together they had a son, Lee, and two daughters Cecily and Cindy. Reich passed away in 1973 and twelve years later she married Gerald Drayton Burrill. They travelled extensively and enjoyed their lives. Sadly, Sylvia was widowed again when Jerry passed away in 1991. On Tuesday, Burrill once again flew in a PT-17, like the one she flew so many years ago. Willard Van Wormer of Bennington, also a WWII Veteran, graciously made his beautifully restored plane named "The Flying Dutchman" available for photographs for this article. Once the pictures were done, he and Burrill took the plane up and "went for a little spin" according to Burrill's daughter, Cindy Wiesner. "She still is walking on air."

===========
There were many flights after that special flight-many they took together, some they took alone. In March, Sunny's daughter, Cindy, passed away after a battle with cancer. Sunny had been struggling with her own health problems, and loosing Cindy must have been devastating.
Our thoughts and our prayers go out to Sunny's family...her son, Robert Lee and family and daughter, Cecily and family and Cindy's husband, Jim. When Sunny wrote her history as part of WASP Betty Turner's "Out of the Blue and Into History," she proudly listed five grandchildren: Max and Mathew Reich; Brooke and Kit Carson; and Emma Strohmaier, and five great grandchildren: Samatha; Zachary; Ariana; Hailey, and Zebediah. Since her entry was written in 1999, there are more names and more great family to be added.
When there is more information, we will post it.
Cindy Weisner

Posted by Wings Across America buglegirl at 8:13 PM No comments: