Posted on Facebook September 20, 2011
“My grandmother, my Hero.   WASP Dorothy A. Krasovec Eby passed in her sleep last night.  May she rest in peace. She is already missed.”
Kim Eby Bruch 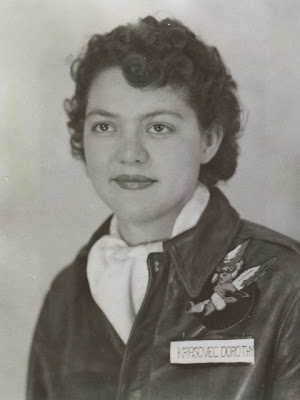 Dorothy Krasovec Eby was born on March 8, 1920 in Sandpoint, Idaho, the youngest of six children.  Her father died when Dorothy was only a year old, leaving her mother as the sole provider.  The family relocated to northern Michigan when Dorothy was five.

At age eight, Dorothy saw her first  bi-plane flying over the Michigan Upper Peninsula.  It was then that she made up her mind that someday, she would learn to fly.  When she was 12, the family moved to Rock Springs, Wyoming, where she graduated from high school and began working as a secretary.

Dorothy read about the Civilian Pilot Training program in the local newspaper.  The program had originally been limited to college students, but, in 1940, the program dropped that requirement, allowing her to qualify.  At just under 21 years old, Dorothy convinced her mother to sign the permission and in July of 1941, she earned her private pilot’s rating.

Two years later, Dorothy read a newspaper article about the WASP  and immediately applied.  She was interviewed at Cheyenne, Wyoming and, after taking an Army physical and written tests, was told to report to Avenger Field in July of 1942 as a member of class 44-W-1.  Dorothy and her classmates were the first class to be fitted by Neiman Marcus for the brand new official Santiago Blue WASP dress uniform.  On February 11, 1944, Dorothy, along with 48 other young women pilots, proudly ‘passed in review’, graduated,  and were awarded their silver WASP wings.

After graduation, she was stationed at Merced Army Air Field, Merced, California.  On the second day at Merced, she met her future husband, Lieutenant Douglas Eby, as she flew as observer on his instrument check ride ‘under the hood.’  They dated until Lt. Eby was transferred to B-17’s and B-29s. Her next assignment was to Instrument School at Bryan Army Air Base in Texas, where she received her Instrument Certificate.

After successfully completing the course, Dorothy was sent to Orlando, Florida to the AAF School of Applied Tactics,  a temporary assignment in preparation for the WASP to become militarized.  After completing the course, she returned to Merced and spent the rest of her time as a WASP as an instrument instructor.  She also flew as a utility pilot, flying dignitaries to San Francisco or Oakland when the weather was bad enough to require IFR rules.

After deactivation, Dorothy remained at Merced, working as a private secretary.  She and now Captain Eby were married on July 11, 1945.  Following his return to Guam, he  was part of the B-29 contingent that flew over the battleship Missouri when General MacArthur accepted the Japanese surrender.

After her husband returned to the states, they began their life together in the San Francisco Bay area, and her husband went to work for Pan American World Airways, where he remained for 33 years. He retired in 1978.

After  raising two sons: David, born in 1950, and Donald, born in 1957, Dorothy returned to flying, became qualified,  and  earned her instructor’s rating.  She and her husband enjoyed their Cessna Skylane and were able to travel around the country. They also stayed active in real estate.

Her legacy lives on in the memories of her sons, her granddaughters,  and in others whose lives she touched.

God bless her family,  and may those memories inspire generations to come to fly just a little higher.

v/r posted by Nancy Parrish  Nov. 21, 2011
Facts from WASP Betty Turner's "Out of the Blue and Into History"


A second posting on facebook from another granddaughter:
"She was an amazing women, growing up with all the stories of the WASP and fond memories of all her pictures she would show us as kids during her training days in Sweetwater. She loved her reunion trips around the world with the WASP and I know she admired all of service women she worked with. She will be very missed and she is very loved. Rest in peace grandma!"
Kelley Eby Devon

Posted by Wings Across America buglegirl at 7:05 PM No comments: 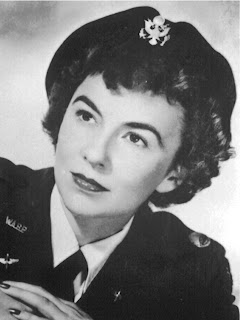 
Mary Lou Colbert Neale was born in Juneau, Alaska to Rear Admiral Leo Otis and Florentine Odou Colbert on October 6, 1914.  Her father was Director of the U.S. Coast and Geodetic Survey (now integrated with NOAA) and was on the Board of Directors for the National Geographic Magazine.  She traveled extensively as a child attending schools in various locales including Manila in the Philippines.  Mary Lou graduated from Georgetown Visitation Preparatory School in Washington D.C. and entered Wellesley College in 1931, graduating with a degree in English Composition in 1935.  She worked as a newspaper writer, and a cataloguer for the Library of Congress.  When the nation prepared for WWII she met with Eleanor Roosevelt to ask  her help in allowing women in the newly formed Civilian Pilot Training Program (CPTP).  In this program she completed her Primary and Secondary Pilot Training.

While working with aeronautic charts in the Department of Commerce, Mary Lou met famous female pilots Jackie Cochran and Amelia Earhart.  Through her acquaintance with the military in Washington D.C., she learned of the formation of the Women Air Force Service Pilots [WASP] Program.  She was the first candidate Jackie Cochran signed up for the program and was a member of the first class, 43-W-1.  Mary Lou was stationed in Dallas, Texas, Long Beach and Palm Springs California.  She was assigned to the Ferry Command, flying P-38s, P-51s, P-47s, P-63s, P-39s, B-25s and various training aircraft between the west and east coast military bases.  Mary Lou was later Commander of the WASP Unit at the Palm Springs Army Air Force Base.  She received a commission as Captain in the USAF Reserve after the WASP organization was deactivated.

After WWII, Mary Lou married her flight instructor in the CPT Program, Navy Captain Raphael A. (Ray) Neale and had four children.  She was a member of the San Fernando Valley 99s Women Pilots Organization, on the Board of Directors and wrote for the P-47, P-38 and P-51 Veterans Organizations, was a charter member of the Santa Clarita Chapter of the American Association of University Women, and volunteered as the Henry Mayo Newhall Memorial Hospital’s
Posted by Wings Across America buglegirl at 7:45 PM No comments: