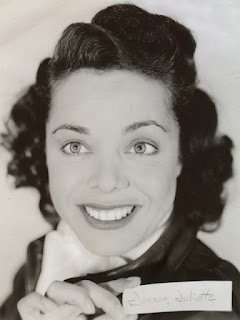 July 05, 2009|By Bob Goldsborough, Special to the Tribune

Juliette "Julie" Jenner Stege's journey through life took her from the vaudeville stage in the 1920s and 1930s to serving as a test pilot in World War II to later careers as a stage actress and TV extra. Well into her 80s, Mrs. Stege remained active and vibrant, taking acting roles while also maintaining a thriving real-estate practice.
A resident of the unincorporated Glen Ellyn Woods area south of Glen Ellyn, Mrs. Stege, 97, died on Monday, June 22, at her home, said her son Tony Stege.

Born in New York City and raised in Brooklyn's Bensonhurst section, Mrs. Stege changed her maiden name from Schwartz to Jenner and performed under the name of Julie Jenner. After accompanying a friend to a dance audition in Manhattan in 1928, she wound up getting a job herself as a dancer, Tony Stege said. That began a more than decade-long career on the stage, during which she performed with the Ziegfeld Follies and various vaudeville acts.

"I was very much in demand because I was such a good dancer," she told the Tribune in 2006. "I still think I'm on the stage." During those years, Mrs. Stege hobnobbed with the rich and famous, getting to know big stars such as Cary Grant, dating director Vincente Minnelli and frequently appearing in the influential gossip columns of Ed Sullivan and Walter Winchell.
While still a dancer, Mrs. Stege befriended an influential man who offered to pay for flying lessons at Mitchel Air Force Base on Long Island. She eventually earned a solo pilot's license and decided to put it to use once World War II broke out and family members of hers in Eastern Europe were sent to concentration camps. "She wanted to kill Hitler," her son said.
Mrs. Stege did not see combat, because female pilots were not permitted to fly missions overseas. But she did enlist in 1943 in the Women Airforce Service Pilots program, which performed test flights inside the U.S. on military equipment, moved aircraft around the country and towed targets for male pilots to shoot.
"Nobody knows there were any women pilots in WW II," she told the Tribune in 2003. "And back then, the men hated us because we were ruining their macho image. They tried to get us stopped." Mrs. Stege's cohorts in New York were very surprised that she was willing to exchange her dancing shoes for pilot's garb, her son said. "Ed Sullivan said to her, 'Julie, why are you joining the Air Force? Don't you know you're just a dumb chorus girl?'" Tony Stege said. "She always wanted to prove people wrong."
For her part, Mrs. Stege attributed some of her dramatic career change to her adventurous nature. "I was just very daring, and it was the most daring thing I could think of," Mrs. Stege told the Tribune in 2006.
While stationed in California during the war, Mrs. Stege met a fellow pilot six years her junior, Wallace Stege, whom she married in 1945. He died in 1995. After the war, Mrs. Stege and her husband moved to the Sherman Oaks area of Los Angeles, where she settled into her role as a wife and mother, her son said. She later took acting classes in the late 1960s at the Lee Strasberg Theatre & Film Institute in West Hollywood, Calif., her son said.
In 1971, the family moved to unincorporated Glen Ellyn. Mrs. Stege decided to plunge into two fields: acting in summer productions in Wisconsin, Illinois and Texas, and, in the late 1970s, starting a career selling residential real estate, Tony Stege said. She eventually also took up part-time residence in Burbank, Calif., and spent time in Hollywood acting in the 1990s as an uncredited extra on a variety of popular TV programs such as "Just Shoot Me," "The Drew Carey Show" and "Third Rock From the Sun," her son said. Mrs. Stege acted and sold real estate until she was close to 90, pulling back only after an auto accident injury.

In 2006, Mrs. Stege flew in a World War II-era aircraft for the first time in 62 years, riding with her son on a short flight from Kankakee to Wheeling in a plane owned by a foundation that aims to educate Americans with their flying classrooms and pieces of history.
In addition to her son, Mrs. Stege is survived by a daughter, Lisa; a son, Randy; three grandchildren; and a sister, Evelyn Stefansson Nef.

* Note: Julie Jenner was one of 96 young women pilots who entered Army Air Force flight training at Avenger Field, Sweetwater, Texas.  On April 15, 1944. only 57 members of class 43-W-3 graduated.  Julie was stationed at Minter Field, Bakersfield, California at the 3008th BU.  She flew an an engineering test pilot, utility and administrative pilot, flying AT-6's and UC-78's.  In 2010, Julie, along with her sister WASP, was awarded the Congressional Gold Medal for her groundbreaking service to her country during  WWII.  Because of the WASP and their service, many young male pilots were able to leave their stateside flying jobs and fly combat missions.
Posted by Wings Across America buglegirl at 11:03 AM No comments: