“I wanted to do something in the war.  I didn’t know what, but I wanted to do something...because all of my boyfriends, everybody I knew was doing something.   I didn’t just want to sit home and model or be an actress.    I tried to donate blood, and they said, ‘Well, you’re not old enough’.   Then my father told me about the WASP , and I thought, “Well, that’s perfect.  That would be perfect.  I had several boyfriends who were airline Captains.  I had excellent instruction!” 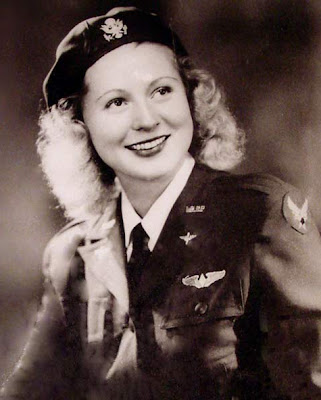 WASP Dori Marland Martin, who traded her career as a Hollywood actress to fly for her country as a WASP, has flown her last mission. On April 22, 2013, she turned her face to the sun, smiled, and quietly slipped away.
____
She was born Dori Marie Jugle in Philadelphia, Pennsylvania on November 14, 1921 to Richard Marland Jugel, President of ABCO Ball Mill (a mining machinery company) and his wife, Marie Henkel Jugle.    Dori never stayed longer than two years in one school, as the family traveled back and forth from Pennsylvania to Colorado.  Between elementary and high school, she skipped three grades. Not wanting her to graduate too early, school officials suggested she be kept out of school each time she was advanced a grade.
During her time off, Dori fell in love with horses and, at age fourteen, she became a champion rider on her horse, ‘Firebird’.  She rode in the hunting, jumping, bareback and English categories, and was  Colorado State Champion  for the ‘under eighteen’ category  for three years in a row.   Eventually, the family moved to Chicago, where Dori spent her last two years of high school,  swimming with the Lake Shore A.C. Water Ballet Team.
After high school graduation, in August of 1940, Dori won the Catalina Swim Suits  national competition for the “Most Beautiful Figure.”  The prize included a trip to California, where she enrolled as a full time student at the Pasadena Playhouse.  She took her father’s middle name as her official stage name and became Dori Marland.   She spent two years learning the craft of acting  and working at Paramount Pictures.  During her time off,  she taught riding.
After America was attacked at Pearl Harbor, Dori wanted to do something to help the war effort.  Like many other Hollywood starlets,  she agreed to pose for a 'pin-up picture' as a morale booster for the troops.  However, she was desperate to do more.   Her father told her about a training program for women pilots to fly for the Army Air Forces.  She immediately returned to Denver and began taking flying lessons from two boyfriends, both Captains with Continental Air Lines.  After soloing in a Luscomb, she continued building up her hours.  Once she met the requirements, she applied for the WASP training program, was interviewed in Denver,  and was accepted.
She reported to Avenger Field, Sweetwater, Texas right after the Fourth of July in 1943 as a member of class 43-W-8.  After completing six months of flight training, Dori and 48 of her classmates graduated in the first ceremony held inside the new gymnasium at Avenger Field.  It was also the first time that graduates sat on the stage.  Although no band played and there was no ‘pass in review’, the graduates were the first class of WASP to wear the newly designed official Women Airforce Service Pilots silver wings.
After graduation, Dori was sent to Douglas Army Air Field, Arizona,  the largest twin engine advanced training base in the United States.  Her jobs included engineering testing and,  as she later described it,  “going places and bringing planes,  that were wrecked or just barely making it,  back to Douglas to be repaired,  and administrative flying--flying Generals around who want to see things.”
While at Douglas, she was sent on temporary assignment to Orlando, Florida, where she completed the officer’s training program.  Eventually, she was transferred from Douglas to Kingman, Arizona.  There, she completed the B-26 transition training and flew tow target missions for air-to-air gunnery practice.  Her last duty station was Luke Field, Arizona, where she flew single engine trainers.
After the WASP were disbanded, Dori returned to Denver and took a job modeling designer fashions.  On New Year’s Eve, she met Colonel Herbert Morgan, WWII Flying Tiger Ace, former Aide to General Chenault and the Commanding Officer at Casper, Wyoming AAB.   They were married in the Lowry AFB Chapel in Denver, Colorado in June of 1945.  Eventually, her husband became Commanding Officer at Clovis Army Air Base, New Mexico, which was the largest B-29 Operational Training Unit in the United States.  From Clovis, her husband was transferred to the Pentagon, so they moved to Washington.
Shortly afterwards, Dori returned to Denver, ending her marriage.  She then began touring with an acting company, performing at air bases in the Rocky Mountain Region.

“I played the ingénue,  of course.  And one night, one of the key characters didn’t show up (one of the older ladies), so I took that part.  And I had an old wig and the wrinkles on my face, and I was just horrified.  Nobody looked at me.  Nobody said ‘hello’.  None of the boys paid any attention to me.  I just was really horrified, so I never played her again!  From there on, I stuck with the ingénue.”

Eventually, she moved back to  California, where she took a modelling job at I. Magnin & Co., which included modelling hats for the artists to draw for magazine ads.
Dori's  father encouraged her to continue flying and,  in 1947,  friend Jo Stafford asked her to pilot her plane in the Cleveland Air Races.   She agreed and entered the race.  She was in the lead when the plane had engine problems and eventually quit at tree top level.   Dori survived the crash, but never raced again.
Shortly after the race, Dori married Johnny F. Martin, Chief Test Pilot for Douglas Aircraft.  The couple moved to Muroc, California in the Mojave Desert,  where the Muroc  Dry Lake (now Edwards Air Force Base) was used for flight testing.  Eventually, they moved to Beverly Hills where they enjoyed the Hollywood life style.  The Martins built a home in Rolling Hills and started their family.   Dori became a stay-at-home mom, den mother,  and little league cheerleader for her  two young sons, Richard Joseph and Michael James.
Eventually, she completed night school courses and earned her real estate license.  She then went to work for Wagenseller & Durst Securities Corporation,  managing high-rise office buildings in downtown LA.    When the couple  separated,  Dori and her sons moved to South Pasadena.
After a fall, a long rehab ended Dori’s career in real estate management.  She called it the toughest time in her life--  caring for her parents, her sons and, as she described it,  she was “very, very broke.”  She pulled herself up by her bootstraps and worked her way back by working the graveyard shift at the US Post Office, sorting mail.   As she later remembered, “I’d eat lunch at three o’clock in the morning in my car in the rain.  I got through it.“ It took her six years.
Later in her life, she began traveling, spending time with friends in Europe and the US.   On a short visit to Sun City West, Arizona, she decided to stay for a while--which turned into twenty-seven years.  Just a quick bus trip to Las Vegas, Dori loved the area, and continued to ‘enjoy the ride,’ entering and winning blackjack tournaments,  making new friends, and swimming year round.
In 2001, Wings Across America was privileged to interview Dori at her home in Arizona.  She was a charming, warm, beautiful lady.  During the interview, when  asked what her favorite airplane was, she didn’t hesitate. 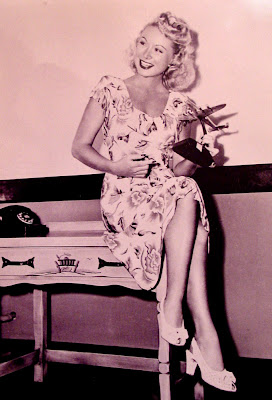 Just after her service as a WASP, Dori agreed to pose for a picture.  It is fitting to include it here.
When asked what her favorite word was, she couldn’t pick just one:   “I’d say horses, airplanes, men,  and parties--not necessarily in that order.”
From horsewoman,  to Hollywood starlet, to WASP, Dori Marland Martin was truly one-of-a-kind. Forever the ingenue,  this  actress, model, horsewoman,  and pilot was a true patriot.  She could have stayed in Hollywood and ‘acted’ her way through World War II.  Instead, she learned to fly so that she could serve her country as a WASP.    She dined at the finest Sunset Strip restaurants and lived in the hills overlooking Hollywood, she modeled mink coats and ostrich feathered hats, and she flew the B-26 bomber--nicknamed the  ‘Widowmaker.‘   Her life was a testament to patriotism, hard work, persistence,  and turning set-backs into step-ups.   When she needed to, she made her way through, and she always did it with a smile. 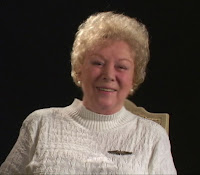 Memorial donations may be made in Dori's honor to Wings Across America,  the National WASP WWII Museum, or to Sun Cities 4 Paws Rescue, Inc. 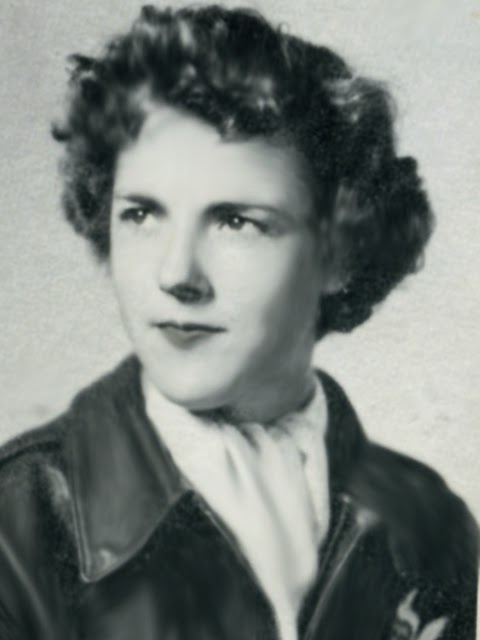 Already a licensed pilot, Jeanne became a professional in the visual arts.  During World War II, she interrupted her studies at Philadelphia's Museum School of Art to volunteer to serve her country.  Already a licensed, experienced pilot, Jeanne put her studies on hold and applied to become a WASP.  She was accepted into Women Airforce Service Pilots training Class 43-W- 5.

Jeanne and 126 other young women pilots arrived at the   318th Army Air Force Flying Training Detachment, Avenger Field, Sweetwater, Texas on March 26, 1943.  After completing over five months of flying training, she was one of eighty-five who graduated, earning their silver wings.

After graduation Jeanne was sent to Dodge City Army Air Base, Dodge City, Kansas where she completed  B-26 transition flight training.  She was then transferred to the Flexible Gunnery School at Harlingen Army Air Field, Harlingen, Texas, where she flew B-26 tow target missions, training gunners for combat.

After the WASP were disbanded and World War II over,  Jeanne competed in the 1948 "Powder Puff Derby."   accepted a commission in the newly formed United States Air Force.  Subsequent service included assignments in public relations and intelligence during the Korean War. Discharged from the military after earning the rank of captain, she continued federal services as a civilian air traffic control specialist.  She was stationed at Albuquerque, El Paso, Yuma, Palmdale terminal and for ten years at Los Angeles LAX.  She retired from the Federal Aviation Administration in 1983.

In addition to her career in the aviation field, she worked as a commercial artist, model, welder, charter pilot and guest house operator. She had a lifetime interest in art and accomplished many works in multi media.

Since 1977, Jeanne was a resident of Leisure World in Seal Beach, California. In recent years at Long Beach she devoted time to bike riding and competitive swimming, winning several gold medals; other pastimes included studies at Golden West College.

She is survived by her nephews John P. d'Ambly and his wife Karen of Hackettstown, New Jersey and Jeffrey T. d'Ambly and his wife Linda of Raynham Massachusetts and a cousin, Davis d'Ambly of Philadelphia, Pennsylvania.
A graveside service was held April 17th at Pacific View Memorial Park.