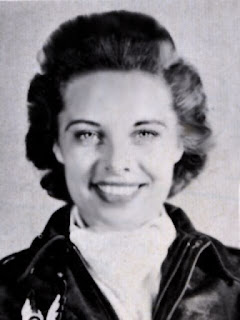 “I got checked out as pilot in the C-47 and co-piloted in the B-17, B-25 and got my instrument rating flying a B-24 from California to Florida.  My instructor told me that I flew better than 95 percent of the male pilots he checked out.”   Adeline Ellison, WASP1

She was born September 26, 1919 in Chicago, Illinois to Polish parents Walter and Anna Wolak.  Addie's father was a civilian pilot and urged his young daughter to take flying lessons.  After only one lesson, she was hooked.  Shortly after earning her license, she and her father joined the Civil Air Patrol and Addie began cross country flying.

When America joined the Allies in World War II,  Addie saw an ad in the paper seeking women pilots for a  experimental flying program. She applied, passed the tests, an army physical and a personal interview,  and was accepted into the Women Airforce Service Pilots training program. 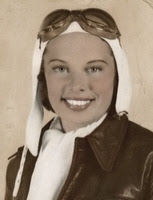 In the spring of 1943, Addie, along with 123 other young women pilots from across the country, paid her way to Sweetwater, Texas and arrived at Avenger Field as a member of training class 43-W-6.  Almost seven months later, on October 4, 1943,  Addie and 83 of her classmates graduated from the Army Air Forces flight training program and earned their silver WASP wings.   She later wrote that her mom and dad borrowed on their insurance to make the long train trip to Sweetwater, Texas for the ceremony.

Following graduation, Addie’s Army orders sent her to Long Beach, California, to fly with the 6th Ferrying Group.  From Long Beach, she delivered aircraft such as the B-17, B-25, B24, and C-47 from factories to bases in the U.S.A.

While at Long Beach, Addie met her future husband, Robert Ellison who was an Army Air Force pilot. They were married June 24th 1944 and since the WASP were being deactivated, she resigned to go with Robert to Colorado to begin their new life.

After the war the young couple traveled around the country as their Air Force family grew to include daughter, Andrea and son, Bobby.   Eventually, they settled in San Carlos, Ca.

She joined the Air Force Reserves but was discharged when they found out she had children. In the 1970's the WASP were given Veteran status and in 2010 they were awarded the Congressional Gold Medal, highest civilian honor that Congress can bestow. Addie attended the ceremony in D.C. with her family. It was one of the highlights of her life.

In 2012, a Cessna 172 named "ADELINE," was unveiled by owner Ralph Sauceda. It was a special honor given to Addie at the Commemorative Air Force, Modesto, California Airport.

Addie loved life, family and friends. She was a homemaker, a secretary, opened a Latin Dance Studio and ran for City Clerk of San Carlos, Ca. But most of all she was a great wife, mother and grandmother. In 1983, Addie and Bob moved to Modesto to be close to their grandchildren.

For the next few years, the couple continued their love of adventure by traveling all over the world.  Robert passed away after their 57th year of marriage.  Addie is survived by her daughter Andrea Holmquist (Thom), granddaughters Alyssa Bienvenu (Rich) and Amanda Holmquist and great grandson Lucien Bienvenu. She was preceded in death by her son Bobby, and brother Ed Wolak.

Adeline Wolak Ellison will be interred at San Joaquin National Cemetery next to her husband. She requested this for their grave stone:"Two Hot Pilots Together at Last.”

Respectfully posted by Wings Across America from the official obituary, with additional WASP information and  photo included.

Our prayers for Addie's family, her friends, and everyone who was touched by this gentle lady pilot.

Posted by Wings Across America buglegirl at 8:11 PM No comments: