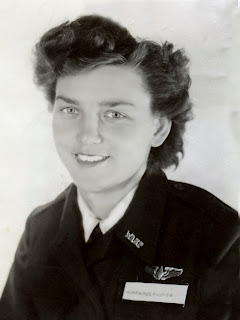 Eloise Huffhines Bailey, WASP, Class 44-4,  took her last flight on October 6, 2010.  She is now flying higher than she has ever flown.

Eloise was a native Texan, born in 1921 near Richardson, Texas, just outside of Dallas, to a family of pilots.  Eloise had no choice -- she was a country girl from Texas who was born to fly.

When she had enough hours, she applied for and was accepted into the WASP training program at Avenger Field in Sweetwater, Texas  on November 1, 1943. There she learned to fly the Army Air Forces military aircraft, always wearing her favorite boots.

After successfully finishing  seven months of training at Avenger Field, she graduated, received her silver wings and her official orders from the Army Air Forces  to report to Maxwell Field in Montgomery, Alabama, which was a B-24 repair depot.  Eloise and her classmate, Millie Davidson (Dalrymple),  drove to Maxwell, arriving on "D Day", June 6, 1944.  They were billeted in the Nurses' Quarters across from the Officer's Club.

While at Maxwell, which her friend, Millie,  called "a paradise compared to Avenger", Eloise was able to check out on a number of aircraft, including the B-24, which she flew as an engineering co-pilot.    Her primary flying assignment was on slow-timing missions  to ‘break in’  rebuilt or new engines on the B-24s.   She was also able to qualify as first pilot on the UC-78, AT-11 and C-45.

When the WASP were disbanded, she packed her bags and paid her way back to her favorite place in all the world —TEXAS.   She probably didn't pack her boots.  She was probably wearing them!
____________ 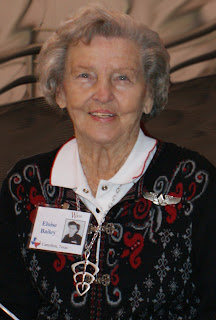 On Veteran's Day last year, I met Eloise and Ted Bailey at a special event where Senator Kay Bailey Hutchison presented the WASP of Texas with a signed copy of the bill awarding them the Congressional Gold Medal.  Eloise looked terrific, as she stepped forward to receive her copy.  It was an honor to see these pioneers be singled out by the Senator, as each name was read.  Much of the text written above was put together by my mom, who was in Eloise's class, as a way of personalizing and introducing each WASP.

I'm sorry I don't have even more information.  I remember Millie Dalrymple saying that "Huffy" could fly absolutely anything with wings, as long as she had on her favorite boots.

God bless her family -- they are all in our prayers.

She was preceded in death by her father, Elmo Huffhines, her mother, Clyde Huffhines, four brothers and four sisters.

Location: Restland Funeral Home at 13005 Greeneville Ave, Dallas 75243
Posted by Wings Across America buglegirl at 8:59 AM No comments:

Jack was born in Everman on June 18, 1923, to Gladys and Reg L. Robbins. After graduating from Arlington Heights High School in Fort Worth, Jack attended Texas Tech until Pearl Harbor.

In 1942, he became a flight instructor for the Army Air Corps in Fort Stockton. In 1943, he married Kathryn Word, rose to the rank of flight commander instructing WASPs at Sweetwater, and then joined his father in the fledgling aviation business in Houston in 1944. The two of them were instrumental in formatting Houston Executive Air Service.

Jack retired in 1983 to travel, buried Kathryn in 1984, married Bobbie Hughes in 1985 and moved to Panorama Village in 1987 to play golf and relax. He was a 62-year member of Quiet Birdmen in Houston and Conroe Hangars, member of Park Place Masonic Lodge and Arabia Shrine Temple.

Published in Fort Worth Star-Telegram on October 6, 2010
Posted by Wings Across America buglegirl at 11:12 AM No comments: