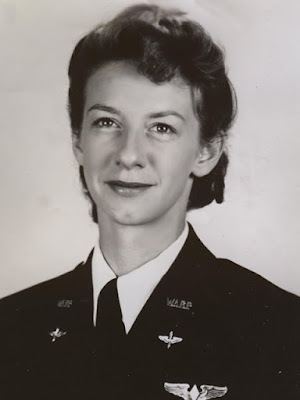 'Fran' was born in DuBois, Pennsylvania, on July 2, 1917, the fourth child and third daughter of Maude Elizabeth Baker Winter and Francis Ellis Winter. At an early age, her family moved to Erie, Pennsylvania, where she lived until 1934 when she moved to Hot Springs, Arkansas.

She was educated at Hendrix College, Conway, Arkansas; Oklahoma College for Women (now known as Oklahoma University of Arts and Sciences at Chickasha, Oklahoma); and Louisiana State University where, at age 59, she earned a Master's degree in Library Science. She lived in Shreveport, Louisiana for over six decades and in 2008 moved to Springfield.

During World War II Fran earned a pilot license and, completing all requirements, was accepted as one of the 103 trainees in WASP class 44-7.  September 8, 1944, after successfully completing over seven months of Army Air Force flight training, Fran and 58 of her classmates graduated, earned their silver WASP wings and became Women Airforce Service Pilots -- the first women in history to fly America's military aircraft.

Following graduation, Fran's official Army orders sent her to Columbus Army Air Field, Columbus, Mississippi as part of the Flying Training Command's 30th Army Air Force -- 2112th AFBase Unit.  While there, she would have flown AT-10 flight testing missions as well as ferrying, utility and administrative missions.  For that service, Fran and her WASP sisters were awarded the Congressional Gold Medal in 2010.  It is the highest civilian honor Congress can bestow.

Following WWII, Fran married H.N. Kinney Brookings and they began their life together.  From 1970 to 1982 she was employed by the Caddo Parish Schools (Shreveport, LA) as an English Teacher and Librarian.

Fran's family would like to express their gratitude to the staff of The Legacy at Forest Glen for taking such good care of our mother these past four years. A celebration of Fran's life will be held in Shreveport, Louisiana, where she lived most of her adult life and, with Kinney, raised her four children.

Respectfully posted from the Springfield News-Sun / Apr. 22, 2018 with additional WASP facts and photo added by Wings Across America.  God bless all those touched by the life of this wonderful WASP.

Posted by Wings Across America buglegirl at 1:30 PM No comments: 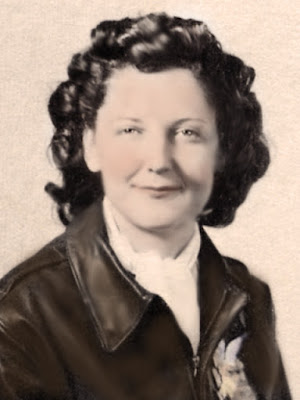 
WASP Betty Lee Heinrich Berkstresser was born May 12, 1919, in Houston TX.  She peacefully passed in her sleep and took her last flight on July 1, 2018.  She was 99.
Betty was a native Houstonian.  She attended Travis and Browning Elementary, James Hogg Middle School, La Porte High School and was a graduate of the University of Houston.
When a U of H math professor for whom she was grading papers asked, “Would you like to be a pilot,” Betty jumped at the chance to learn to fly.  She immediately enrolled in the Civilian Pilot Training program at U of H, took her flight training at Hobby Airport and began adding hours to her logbook.
Betty’s love of flying enabled her to serve as a Women Airforce Service Pilot (WASP). She was accepted into the 43-4 class of WASP trainees and reported to Avenger Field, Sweetwater, Texas.  Betty’s favorite plane was the AT-7, in which she flew over 500 hours.  Following her graduation in August of 1943, she was assigned to Love Field in Dallas, Texas as a ferry pilot, as a ferry pilot and then as a Link Trainer instructor in Orlando, FL.
After a transfer to Hondo Army Air Field in Hondo, Texas, a navigation and engineering school, Betty’s assignment was navigational flying in C-45s training cadet navigators. She met her soon to be husband, pilot Virgel K. Berkstresser (Herky), while in Hondo and remained based there until the WASP were disbanded.
Two days after the WASP were disbanded, Betty married her co-pilot, and they later settled in Houston to rearing their family. Betty was a wonderful mother to her four children: Betty Keene, a former NASA aerospace engineer and private pilot; Peggy, a former teacher and outdoor educator; Terry, materials manager and private pilot; and Kerry, an actuarial analyst, and hot air balloonist. While rearing their family, Betty taught multiple grade levels for many years at Houston ISD elementary schools Garden Villas, Bastian, and Golfcrest, eventually retiring from teaching in 1983.
Throughout her retirement, she immensely enjoyed visits from former students and room mothers. Betty loved to read, garden, sew, quilt, stargaze, and travel.  She rode more than 50,000 miles around the U.S. and Canada on her Honda 500cc motorcycle with Herky and Garner State Park with friends. She and Peggy took her two grandchildren on yearly road trips throughout the west and to Canada. Gallivanting, whether around the country or just around town, was always much loved. A special memory was the “extraordinary day” when she and all WASP were honored in Washington D.C. at the Capitol with the Congressional Gold Medal for their pioneering work during WWII.
Following Virgel’ s death in 2007, Betty stayed in her Houston home living with daughter, Peggy, and later several live-in caregivers. Her grand backyard full of fountains, flowers, and birds was always a joy.  After watching the "Treehouse Masters" television program, Betty had her treehouse built in Leakey overlooking the Frio Springs. Unfortunately, a fall and a hospital stay required a move to an assisted living facility, however, she spent time at her treehouse, “Betty’s Birdhouse”, whenever she could.
Betty was predeceased by her parents, Rhea and Joseph Heinrich; sister, Dorothy; and brother, Raymond. Surviving are daughters Betty and partner Bill Hezlep of Round Top, TX, Peggy of Leakey, TX, Kerry and partner Barry Barnett of Dripping Springs, TX; son, Terry and wife Patti of Leakey, TX; brother James of Baytown, TX; sister-in-law and fellow WASP, Barbara Willis Heinrich of Hayward, CA; grandchildren, Warren Berkstresser and his wife Reanne of Seattle, WA and  Kristen and her husband Tyler Carter, and great-grandchild, Owen Carter, of Houston, TX; grand cat Tess Barnett (Kerry’s cat); and numerous nieces and nephews.
The family will celebrate Betty’s life privately. Betty would say, "Go!  Have fun!"
Many thanks to all her loving and dedicated caregivers she was blessed to have help her through her final years.


Best wishes or comments to the family may be made at http://www.nelsonfuneralhomes.net.
Donations in memory of Betty Berkstresser may be made to National WASP WWII Museum, 210 Avenger Field Rd., Sweetwater, TX 79556 (http://waspmuseum.org); your local flying school (https://www.aopa.org/learntofly/school/index.cfm); or feel free to just “go flying” – she would like that.