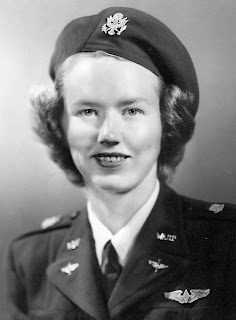 Blanche Osborn Bross, born July 21, 1916, in Doland, S.D., left this world for a better one on July 22, 2008, at the age of 92. In addition to her husband of 50 years, Willis H. Bross, Blanche is survived by her son, Charles (Susan) Bross of Renton, Wash.; stepson, David (Judy) Bross of Long Beach, Wash.; and stepdaughter, Denise Bross of Redding, Calif. She also leaves numerous nieces and nephews.

In 1943, Blanche heeded the call to duty by joining the Women’s Air Force Service Pilots, WASP. More than 25,000 women applied for the prestigious WASP program but only a select 1074 graduated. WASP’s like Blanche spent countless hours training to assume piloting jobs, delivering planes from factories to their domestic bases, towing targets for gunnery practice, and training cadet pilots. Sent to Ohio to learn to fly four-engine aircraft, she learned to pilot the legendary B-17 “Flying Fortress”. Stationed at Fort Myers, Fla., she took gunners up in the air where they fired at targets towed by a B-25.

After spending close to a year at Fort Myers, Blanche and three other WASP’s were transferred to the Las Vegas gunnery school where they were used in the engineering squadron to 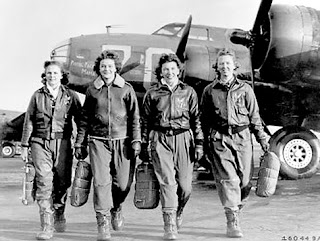 test repaired aircraft. The program generated significant publicity during the war and Blanche was featured in a famous picture of female pilots walking away from the “Pistol Packin’ Mama”, a B-17 bomber. The photograph has since been used in advertisements for clothing lines, fashion magazines, historical chronicles and a copy hangs in the Smithsonian Museum.

After the WASP’s, Blanche joined the American Red Cross and was sent to Kunming, China. Following her tour in China, Blanche returned to the U.S. to begin a family. In 1957 she married Willis H. Bross with whom she had a son, Charles. Together they moved to Portland where they developed a seaplane flying base. Later, Blanche received a commercial pilot’s license and flew construction crews to work sites. She also spent many years as an accountant and after retirement was an avid golfer.

At Blanche’s request, no service will be held.

In lieu of flowers, any memorials be made to a favorite charity.

Posted by Wings Across America buglegirl at 7:35 AM 9 comments: