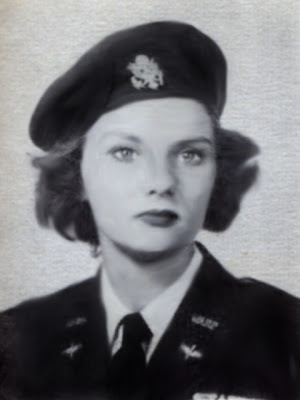 WASP Patricia Collins Hughes, 86, of Charles Town, West Virginia, passed away on September 29, 2010.  Although her voice is now silent,  during the WASP fight for veteran status in 1977, she was a gallant and vibrant crusader, using her newspaper column  to provide ammunition to help win the WASP their rightful place among World War II veterans.
___

Born  in Bethesda, Maryland, Patricia was the daughter of Capt. and Mrs. J.P. Collins.  She attended George Washington University and later worked as a draftsman with the Army Air Forces at Bolling Field for two years.  During World War II, while her father served in the US Marines in the Pacific Theatre,  Patricia learned to fly and built up her flying time to  over 65 hours, eventually  applying to enter the WASP.

Patricia was accepted into Army Air Force flight training, paying her own way from Washington, DC  to  Sweetwater, Texas, where the 2563rd Army Air Forces Base Unit was located.  She and 135 other young women pilots arrived  just ahead of a blue norther on January 7, 1944.  Overnight,  the temperature dropped 35 degrees and the west Texas wind dumped two feet of snow on the new arrivals.

After seven months of AAF flight training, on August 4, 1944, Patricia and 75 other members of her class successfully completed training and earned their silver WASP wings.  The high that day was 104.

After graduating, Patrica was sent to Foster Army Air Field in Victoria, Texas, just off the Gulf Coast.  Foster was an advanced training base, where the WASP would have flown training missions in AT-6's, as well as instrument instruction, administrative and ferrying missions.  Selected WASP at Foster also towed targets in AT-6's to help train Mexican fighter pilots in air-to-air gunnery.

Over thirty years after her service as a WASP, Patricia stepped forward again, this time to help fight for WASP Veteran status.   As the WASP Militarization Committee began their lobbying efforts in Washington, DC, Patricia began writing a column in the Stars and Stripes  that spelled out the struggle and spoke the truth.

In her column entitled "11 Bills Pending for Veterans Status," in the September 1, 1977 edition of Stars and Stripes, Patricia laid out a simple argument:    "The crux of the current argument against militarization apparently is that the WASP do not meet the VA definition of veterans despite the fact that they were sworn in and served as part and parcel of the military, because a formal SOP discharge was never issued. They were disbanded, ergo, they were not categorized as veterans and can not be considered as meeting the veteran definition."
"Gentlemen and gentlewomen, that's what we've been saying for 33 years!  That's why we are STILL petitioning! Your predecessors dumped us ingloriously. We kept our commitment up to the letter of our sworn oath ... they wrote us off as if we never existed. Give us a discharge based on the criteria used to qualify men for a discharge during the same war in the same MOS and the argument is settled."

As Molly Merryman wrote in  "Clipped Wings,'  "Besides providing details about the 1944 bid for militarization, congressional hearings, and subsequent disbandment of the WASP program, Hughes's columns also provided detailed updates about activities on Capitol Hill."  During the committee hearings, Patricia Hughes fearless reporting 'outed' the Senate Veterans' Affairs Committee and Chair, Senator Alan Cranston, for deliberate delay of the WASP bill.  She also quoted a Veterans Administration representative stating that President Carter had specifically ordered him to testify against the bill and publicized a statement by Rep. Herbert Roberts, Chair of the House Committee on Veterans' Affairs, that "I will never let this bill come out of Committee."


Thanks to Patricia and  many other WASP champions, the Women Airforce Service Pilots were finally awarded the veteran status they had earned.  Thirty three years later,   on March 10, 2010,  Patricia, dressed proudly in her WWII Santiago blue WASP uniform, along with over 175 WASP,  was awarded the Congressional Gold Medal, highest civilian award -- to an overflow crowd of over 2,500 -- largest gathering inside the capitol in history.

Thanks to an opportunity given to her by the Stars and Stripes,  her legacy lives on as a shining example of what one woman can do when she believes it is the right thing and she puts her mind to it.

WASP Patricia Collins Hughes did just that. It is on the record.

Following information was sent by Patrica's family and posted online at the Journal News:

During WWII Patricia joined the Women Airforce Service Pilots (WASP), graduating class 44-W-6. Awarded Congressional Gold Medal in 2010. She was a major in the Civil Air Patrol.  She also served as a volunteer of St. James Roman Catholic Church, Charles Town; and a member of the West Virginia Gabriel Project. She was 15 years active in local Harpers Ferry river clean-ups and environmental awareness and was a founding member of the Potomac Chapter Canoe Safety Patrol.  Mrs. Hughes was an accomplished commercial and fine artist. Also she was the owner of Hughes Studios Writer.


She is survived by sons, Michael Hughes, of Wardensville; Stephen Hughes and wife, Kristina Anttila, of New York, N.Y., Kevin Hughes, of Charles Town and Padraic Hughes and wife, Brigid, of Chevy Chase, Md.; eight grandchildren, Mary Hughes, Jesse and Jenna Anttila-Hughes, Zachary Hughes, Liam and Fergus Hughes, and Robert and Scott Dielman; and one brother, John Paul Collins, of South Carolina.  In addition to her parents, she was preceded in death by one daughter, Carol Dielman, of Arlington, Va.; and two sisters.