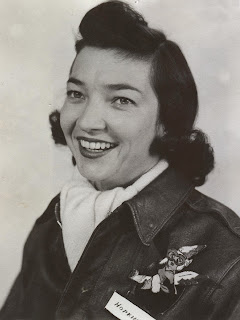 Anna Hopkins White was born in Little Rock, Arkansas and raised in Jena, Louisiana.
She learned to fly while studying airport management at LSU. She fell in love with flying and hitchhiked from the campus to the airport so that she could earn more hours, finally logging the 35 hours required to enter WASP training.
She applied for and was accepted into the women’s flying training program. In August of 1943, Anna arrived in hot, dusty, Sweetwater, Texas, to report for training as a member of class of 44-1.
Anna and her class were the first WASP class to graduate wearing the Santiago Blue uniform, which had been designed for the WASP by Bergdorf Goodman and fitted by Neiman Marcus in Dallas. In their honor, the other classes composed special songs for the ceremony, creating a new tradition at Avenger Field.
After earning her silver wings on Feb. 11, 1944, Anna was assigned to Childress Army Air Field, a Bombardier School, in Childress, Texas. Here, she flew the AT-11, flying to a fixed altitude, and turning over the aircraft to the bombardier cadets for the ‘simulated bomb runs’ as they practiced for combat. Later, she was transferred to Eagle Pass Advanced Gunnery School helping train gunnery cadets.
After the WASP were disbanded, Ann worked as an instrument instructor in Corpus Christi, eventually marrying one of her students. 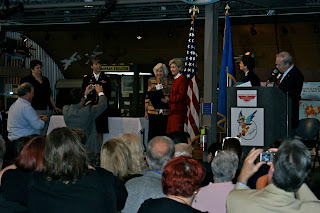 On Veteran's Day, 2010, Anna was one of the WASP honored in Dallas, Texas at a special event.  Senator Kay Bailey Hutchison presented her with a copy of the bill, awarding the WASP the Congressional Gold Medal.  her face lit up as she shook the Senator's hand.
Anna passed away on January 29, 2011.  Our prayers are with her family.
Respectfully posted by Nancy Parrish
February 28, 2011
Posted by Wings Across America buglegirl at 10:02 AM No comments: 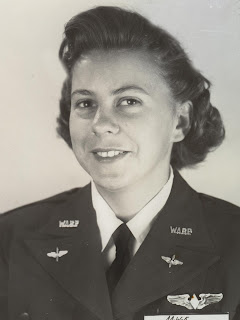 Martha's roots were always planted deep in the soil of Tennessee, even though she took flight and served her country as a WASP during World War II.

During one of her last cross country training flights, Martha's unique experience was captured by classmate Doris Tanner in her "Zoot Suits and Parachutes:


A rough cow pasture was where luckless Martha McKenzie found it necessary to land. Her plane had sputtered out its last drop of fuel before she realized she was lost.  Mushing the plane down, she managed to land safely, climbed out and began walking to a nearby farmhouse.  Suddenly, she grew aware that she was not alone.  Turning, she found an approaching herd of Herefords bearing down on her. A burst of adrenaline sent her running faster than possible. She jumped the fence and made it to the farmhouse porch. Pounding on the door, she met a deaf old farmer who kept repeating, "Well, I'll be darned if it ain't a gal."  He cranked up his old Ford and drove her to the nearest telephone some miles down the road.

Martha eventually graduated from Army Air Forces flight training as a member of WASP class 44-W-5, one of 72 young women pilots to earn their silver wings on June 27, 1944.

After graduating, Martha's Army orders sent her to  Napier Army Air Base in Dothan, Alabama, close enough to Tennessee to almost feel like home.  At Napier,  she would have flown AT-6's as an engineering test pilot, instrument instructor  and would have ferried PT-17's and AT-6's. From Napier, she was transferred to Tyndall AFB, Florida, where she successfully completed B-26 transition training to become a B-26 tow target pilot.

After the WASP were disbanded, Martha became a bookkeeper, married and began to raise a family.   She retired from Memphis Furniture Manufacturers as a bookkeeper.

She was preceded in death by her husband of 35 years, George M. Carpenter, and two sons, Daniel Green, and John Green. She is survived by her three daughters, Martha (Roger) Murray of Jackson, Maine; Garland (Jackie) Davis of Nesbit, MS; and Meg Thomas of Memphis; 10 grandchildren; and 25 great-grandchildren.

A funeral service was held Wednesday, February 9 at Memphis Funeral Home, followed by interment  at Mt. Olivet Cemetery, McKenzie, TN.   The family requests memorials be made to either Make-A-Wish Foundation or to St Jude Children’s Research Hospital.

Of her hometown, Martha once said,


"McKenzie has always been a good place to live.   Folks were interested in having good schools, good churches and keeping an eye on their children. The town has responded to national emergencies, sending their boys to the service, supporting the Red Cross and War Bond campaigns. There have always been those planting flowers to make the town pretty, book clubs to keep up to date on what was going on, and church circle meetings.   Many former McKenzians and their children have excelled in the field of education, military, athletics and religion. I am sure the young people coming up now will accomplish even more with the opportunities open to them today. And when they become famous, I hope they will always mention they got their station in this little town, even if it's through a great grandfather or grandmother. I hope those who choose to leave McKenzie will always have a longing to return someday.

I honestly believe the happiest people in the world are those who were born and raised here and never left. I still get home sick sometimes and when I'm on the way up here, along about Jarrell Switch, the air seems to smell better, the trees  greener, and I drive a little faster."

Martha's roots.
Posted by Wings Across America buglegirl at 9:11 AM 1 comment: