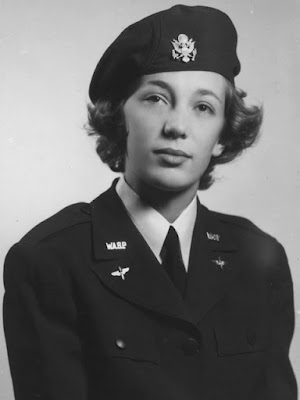 "My first flight was with a barnstormer at the age of five.  I loved it!  I also tried to 'fly' out of the barn loft with an umbrella.  This was less than successful..."


The indomitable Marguerite Jean Terrell Moreo McCreery has "...slipped the surly bonds of Earth. And danced the skies on laughter-silvered wings."   She had a lifelong love affair with flying and her passion will undoubtedly continue to fuel many who will follow in her footsteps.

Jean was born on April 28, 1924, in Troy, Ohio to Ivan and Marguerite Terrell.  Just five years later,  the young girl took a flight with a barnstormer and fell in love with flying.  Following graduation from Troy High School, she worked as a draftsman for the Waco Aircraft Company.

It wasn't until her freshman year at Ohio University that she truly put her love of flying into action.  She enrolled in ground school training as part of the CPT (Civilian Pilot Training) program. The following summer, she began flight training at the Treaty City Airport in Greenville, Ohio.  She earned her hours using money from her job at the aircraft company.  In November of 1943, Jean had accumulated enough hours for her private pilot's license and applied for WASP training.

She was accepted into class 44-W-10 and arrived with 120 other hopeful women pilots at Avenger Field, Sweetwater, Texas, in May of 1944. During training, the class was told that the WASP would be disbanded at the end of the year.    Jean fully embraced the training and loved being a member of Class 44-10.


"When we were in training...we were told that our class would not have a yearbook.  Peggy Weber and I decided to publish one ourselves.  It was a great success and we spent the profits eating steak in Sweetwater."

After seven months of training, Jean and 67 of her classmates graduated and earned their silver WASP Wings.  Because 44-W-10 was the last class of Army Air Force Flight Training for women, dignitaries came from across the country, including over 100 active duty WASP.   General Hap Arnold, Lt General Barton K. Yount, and Director Jacqueline Cochran each spoke as part of the final WASP graduation ceremony.  It was December 7, 1944.

Following graduation, Jean was assigned to Randolph Field, San Antonio, Texas, where she flew engineering test flights and check flights in the AT-6 until the last day.  On December 20, 1944, the WASP were deactivated and Jean paid her way from Randolph Field, Texas to the Banana River Naval Air Station in Florida, where she married her high school sweetheart, Earl Moreo, Jr.

After WWII ended, the young couple settled in Troy, Ohio and raised a family of ten children, five boys, and five girls.  Earl worked as a toolmaker while Jean stayed home caring for the family.  In 1970, Jean went back to work as a civil engineering draftsman, working for the city of Vandalia, Ohio for seven years. She also drove a school bus and for three years, delivered RFD mail.

Following the untimely death of her husband, Jean began a new chapter. "I took my car, clothes, typewriter and $200 and left for California."  She worked as a draftsman and helped her daughter with her family.  Two years later, she moved to Arizona and got another job and helped her son with his family.  When her mother became ill, she moved back to Ohio and worked for an engineering consulting firm in Columbus.

On a trip to Marietta, Ohio to buy easements for AT&T, she met a widowed toolmaker named John W. McCreery.  As she described it later, "A year later, we were married in my hometown church in Troy with all my children, grandchildren, our families and friends in attendance."

Jean never met a challenge she couldn't tackle.   In 1993, Jean attended the Women In Military Service to America opening at Arlington.  The then President of the WASP, Vi Cowden, asked her, "What are you willing to do for the WASP?"  She mentioned that the WASP Newsletter needed an editor and Jean agreed.  She became editor the WASP News.  In 2002, she was elected for a two-year term as National WASP WWII Secretary.

In 1995, Jean and her classmate reprised their class book, updating and publishing "44-W-10, The Lost Last Class at Avenger Field."   In her later years, she continued to take on new challenges, representing the WASP at different events around the county.  She also found to time to volunteer to cook for her parish priest. 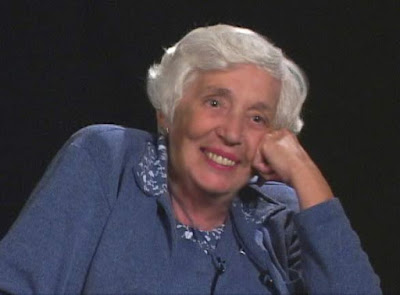 In 2010, Jean and her sister WASP were honored with the Congressional Gold Medal for their selfless and pioneering service as the first women in history to fly America's military aircraft.

A service to honor Jean's life was held at St. Patrick's Church in Troy on July 1st, 2018.   As you remember the life of this unstoppable and unforgettable WASP, please consider a donation to the Women's WWII Memorial at Arlington National Cemetery.

On a personal note.

We interviewed Jean for our Wings Across America project in 2003.  She and her friend, WASP Betty Turner, stayed with us in our home in Waco.  It was a delightful few days.  I can still remember her warm, deep laugh...and she did love to laugh.  Their trip to Texas was another grand adventure for Jean and we were honored to be a part of it!

God bless Jean, her family and all of us who loved her.  May we all be as vibrant and blessed as this remarkable WASP.

The second to last page of 44-W-10's classbook.
Jean's Oshkosh Interview
Posted by Wings Across America buglegirl at 4:41 PM 5 comments: