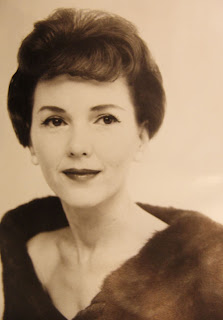 Always a lady... Grace Jones was a pioneer--in fashion and in flying. Her store in Salado, Texas, became quite famous all over the world. "GRACE JONES" was so much more than a store. Because of Grace's keen eye and extraordinary taste, she raised the bar for FASHION--and her tremendous talent was sought after and studied. Even Stanley Marcus tried to hire her. However, Grace was independent. Born into one of the founding families of Texas, she was always her own woman. Grace was also a WASP... a very well dressed WASP!
She passed away quietly February 16, 2008. Below are 3 links: Wings Across America "FINAL FLIGHT" (which includes the original article in the Temple Daily Telegram and photos of Grace
A wonderful personal tribute from the Austin School of Design Blog by fashion designer and teacher Mary Margaret Quadlander Austin American Statesman Obituary
Posted by Wings Across America buglegirl at 8:51 AM No comments:

Emily Bell (Brundle) Henrich, 88, another hero of World War II and America's "Greatest Generation," peacefully took her "last flight home" in the late afternoon hours of Feb. 14, 2008. She was the beloved wife of the late William Henrich, with whom she had shared 27 years of marriage prior to his death. He was the "love of her life."

Born on Dec. 14, 1919, in Canada, she was the daughter of the late Robert W. and Mabel (Smith) Brundle of Stroudsburg.

Emily served in the U.S. Army Air Force during World War II. She entered Army Air Force flight training to become a member of the elite and controversial military unit, the WASP, the Women's Airforce Service Pilots (class 445). Emily was one of 1,830 pilots selected from 25,000 applicants. The program was activated in September 1942. She began her military training at Avenger Field in Sweetwater, Texas. They flew all types of aircraft, from the fastest pursuits, experimental jets and the B-29 bomber, to the smallest utility aircraft. Assignments included towing targets for aerial gunnery practice flying, engineering flights, test flights, instructing cadets, and other missions thereby releasing male pilots for combat. When the male pilot shortage had been successfully corrected, the WASPS program was deactivated on Dec. 20, 1944, with 60 million miles flown in 78 different military aircraft and with 38 WASPS killed in the line of duty.

Emily was a friend of renowned author Ernest Hemingway. She was herself a published author, having written, "Who, What, Where, and When" (author, Emily Bell Henrich, copyright 1999, published 2000 by Dunedin Florida) which was an account of her and her siblings growing up in a large family in rural Stroudsburg and surrounding areas.

Her most recent manuscript, also a true story, "A China Odyssey" (author, Emily Bell Henrich, Dunedin Florida/Linda Mutchler Rushin, Henryville, PA, copyright 2005, San Francisco, CA) is an account of the life of William Arthur Goodrich, her first husband, whose parents had been Methodist missionaries in China and had been murdered during the Boxer Rebellion. They hid their infant son to protect him and he was rescued by the Palace Guard that was sent to the missionaries' home by their friend, the Empress of China, who kept the boy and raised him within the palace walls until he was 11. (copyright 2005).

Emily also was employed as an administrator by the Pineallas County Courthouse. She was an accomplished award-winning artist and loved to travel the world with her beloved husband, Bill Henrich.

Emily was a resident of Florida most of her adult life. She returned home to Monroe County recently to be close to her family.

"We live with the wind and sand and our eyes on the stars." (WASPS) Farewell on your last flight home, dear sister.

Emily is survived by a stepdaughter and son-in-law and dear friends, Barbara and Sal Anzalone of Eugene, Ore.; four sisters, Star Jean Mutchler of Stroudsburg, Mary V. Smith of Stroudsburg, Jeanette Reto of Pen Argyl and Annestesea Sacher of Jeffersonville, Ind.; and many, many beloved nieces and nephews. She was preceded in death by one sister, Judy LaBar, and two brothers, Gordon and Charlie Brundle.

There will be a viewing from 6 to 7:30 p.m. Wednesday, Feb. 20, followed by services at 7:30 in the William H. Clark Funeral Home, 1003 Main St., Stroudsburg, with the Rev. Thomas Anderman officiating. Cremation will follow in H.G. Smith Crematory, Stroudsburg.

Graveside services and burial will be at 2 p.m. Thursday, Feb. 21, in the Sand Hill Cemetery, Marshalls Creek.

reprinted from The Pocono Record
Posted by Wings Across America buglegirl at 7:51 AM No comments: 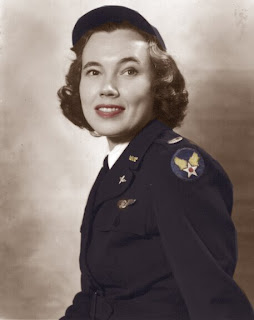 From her own words, p. 38 "Out of the Blue and Into History" by WASP Betty Turner.

"I was born March 21, 1912 in Manhattan, New York City. I had worked during college breaks at a hotel on Shelter Island and returned to the area, and Westhampton Beach which I was acquainted with, after finishing college in 1933.

I flew on my first flight July 4, 1937, and one year later soloed at Nelson Airport in New Jersey.

After graduation from the first class of WASP at Ellington Field in April 1943, I was stationed at Newcastle Air Force Base, Wilmington, Delaware under the command of Betty Huyler Gillies. I flew the B-24, B-25, B-26, DC-3 and 15 other types of military aircraft.

After deactivation, I opened an FBO (Fixed Base Operation) in 1946-1950, and trained pilots and flew charters. I subsequently worked for Curtiss Aviation, and then as associate editor for Flying Magazine, 1953-1060.

I joined the Air Force Reserve in 1950, and retired as Lt. Colonel in 1972. I was governor of the 99's New York, New Jersey Section in 1946. In 1956 I was awarded the Lady Hay Drummond Hay Award for Outstanding Achievement Aviation. I had earned a seaplane, multiengine, instrument and instructor's ratings and commercial license.

I moved to Oyster Bay, Long Island, New York in 1965 and retired from Grumman Aviation in 1981. I was inducted into the Aviation Hall of Fame in Teterboro, New Jersey in 1992.

I reflect on my years in aviation as the best time in my life and have made lifelong friends through aviation, and have accrued over 3,000 hours of flying.

Marjorie is survived by her longtime friend and guardian, Madeline Steiner, 70, of Smithtown. A religious service and cremation will be at 3 p.m. Friday, February 15 in Washington Memorial Park in Mount Sinai, NY.

to link to obituary at Newsday

Posted by Wings Across America buglegirl at 9:16 AM No comments: