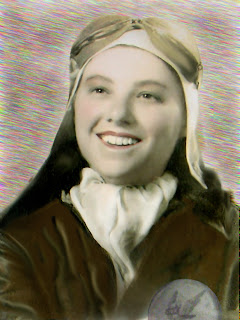 Frankie Yearwood was a precious lady, a WASP that we were proud to call a 'friend,' although I don't really think Frankie ever met a stranger.  She embraced people as friends, and there were many, many friends.  She passed away on Sunday, May 30, 2010, after loosing her final battle to leukemia.
Frankie was strong, determined, kind, gentle and patriotic.  Her faith was her compass, guiding her in everything she did.  Because of that, Sunday was always a very special day for her.  Sunday was not a day to do business.  It was a day to reflect on God's blessings and to thank and honor Him.
For our Wings Across America project, the only day we had to interview Frankie was a Sunday, August 13, 2000. We almost didn't get that opportunity.  I spent quite a bit of time getting to know her over the phone.   She prayed about it and finally agreed.  She felt that what she had to say might be important someday.  I believe today is that day.
Our Wings Across America interviews always end with questions about legacy and inspiration.   Technology is finally catching up with the precious content that Frankie so kindly shared.  Frankie had worked on her answer, and I believe it is appropriate to share it now. May it bless you as it has us.
It is amazing to note that her birthday,  July 10, 1921, was a Sunday, and she finally flew home on  Sunday, May 30, 2010.  Our prayers for her family, her many friends and our prayer of thanksgiving for all those whose lives she touched.
Respectfully submitted by Nancy Parrish
(If you have a problem with the video, you can view it on youtube: http://www.youtube.com/watch?v=lVMtCs-H0Lg
__________________________
Reposted from The Commerical Appeal--Memphis, TN

by Amy Barnette
Frankie Inez Yearwood was, quite literally, the last WASP on record.
A member of the Women Airforce Service Pilots, an elite group of the first American women to fly in the military, Ms. Yearwood was among the program's 1,074 graduates and a part of its last class. Because her name fell at the bottom of the list alphabetically, she was the last on the roster.
Ms. Yearwood, who attained the rank of captain, was honored in March along with about 300 other women who flew in the service. The CONGRESS of the UNITED STATES* awarded the Congressional Gold Medal to each of the remaining WASPs, who were integral in the training of combat pilots during World War II.
She died of leukemia Sunday, fittingly on Memorial Day weekend, at her home in East Memphis. She would have been 89 on July 10.
Although she was born and raised in Oklahoma, Ms. Yearwood considered herself a Memphian. After high school, she moved to Memphis and found a job building airplanes at Fisher Aircraft. From there she enrolled in a West Memphis flight school, which led to her military career.
The WASP program, which ran from 1942 to 1944, received applications from more than 25,000 women, but only 1,830 were selected. Female pilots were not in active combat during the war but were crucial to training and transportation, flying long swaths of fabric behind their planes for target practice and moving aircraft from base to base.
Her brother, Alfred Yearwood II, recalls that her short stature, at around 5-feet tall, nearly kept her from her goal.
"Frankie was a half-inch shorter than the minimum height requirement for the WASP program, but after a visit to a chiropractor, she was admitted," he said.
After the war, Ms. Yearwood returned to Memphis, where she opened a camera and photo shop, Photos by Frankie. An avid photographer, she documented special events, including weddings and reunions, until retiring around 1980.
Niece Cathy Whaley also remembers her aunt's fondness for golfing.
"She loved to play golf," Whaley said. "She and I played together, and she played in a league at Galloway."
In addition to remaining active in the WASP organization, helping with reunions and travel plans, Ms. Yearwood was very involved with her church, Getwell Church of Christ, and her large extended family. "She took care of her mother in West Memphis," Whaley said, "and then her sister."

Frankie was the third of five siblings, and when her sister Mary was widowed, brother Alfred said, Frankie became her constant companion. The sisters lived together for decades until Mary's death earlier this year.
An 11 a.m. visitation Thursday, June 3 will be at Roller Family Funeral Home with a 1 p.m. service. Burial will be private Roller Family Funeral Home (901)371-9500.
Ms. Yearwood was proud that she could still fit into her military uniform, which the family said she will be buried in, with full military honors.
She is survived by her brother and nine nieces and nephews.
_____________
*article edited for accuracy
Posted by Wings Across America buglegirl at 8:07 AM 2 comments: