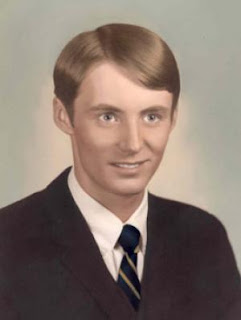 Patrick G. Roberts
1951-2011
Patrick G. Roberts, age 60, of Faribault, died suddenly on Tuesday, Aug. 16, 2011, at his home.
Mass of Christian Burial will be held at 11 a.m. on Monday in the Divine Mercy Catholic Church, 139 Mercy Dr., Faribault. Visitation will be held from 2-5 p.m. on Sunday at the Parker Kohl Funeral Home &amp; Crematory in Faribault and for one hour prior to the services at the church on Monday. The Rosary will be recited at 4 p.m. on Sunday. Interment will be at the Annunciation Cemetery in Hazelwood, Minn.

Patrick George Roberts, the son of Arthur J. Roberts Sr. and Elizabeth (Wall) Strohfus, was born on April 8, 1951, in Faribault. He graduated from Bethlehem Academy and St. Thomas University. Patrick was a traveler, who used his expertise as a bartender and waiter to enlarge his circle of friends and his understandings of life. After college he spent the 1970s in Boston, Mass., and learned the value of dreams and hope. The 1980s found Pat in Madison, Wis., where he hated the Packers. He tried construction and helped build many homes. He was afraid of heights—his knees would shake—but he would still walk a 2x6 wall and set trusses. The 1990s found him in Calif. running a club. He came back to Faribault to care for his beloved uncle, George Wall, during his last year of life.

Pat became a promoter for his mother, a World War II WASP, and all things veteran-related. He wrote and published a book, and was a fixture at air shows around the country that he loved. He was also a member of the Sons of American Legion.

He is sorely missed by those he left: his mother, Elizabeth (Wall) Strohfus and her sister, Cecilia (Wall) Bell; his brothers, Arthur John Roberts Jr., Michael T. Roberts, Kevin D. Roberts and his wife, Mary Carol Roberts, and last, again, but never least, his little sister, Julianne Reed; he was enriched by nieces and nephews, April E., Kathryn, Matthew, Joe, Arthur John III, Rachel, Marie, Brigid, Ron Jr., Jeremiah, and Zachariah; special friends, Becky Sammon and Dave Chipich; and many cousins and friends. He was preceded in death by his father.

Posted by Wings Across America buglegirl at 8:30 AM No comments: