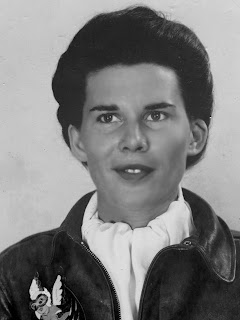 WASP M. Winfred Wood, 43-W-7 passed away in the early morning hours of Aug. 6, 2009. Although my heart is heavy with this news, when I remember Winnie, I smile. She was one of those iconic WASP--a WASP's WASP if you will--who inspired us, educated us and challenged us all to do a little bit better--to be a little bit better. And, judging from those lives she touched, she left behind that wonderful legacy in the lives of her family, her students and those of us lucky enough to have met her and call her 'friend'.

Winnie was born in Macon, Georgia but spent her early years in Coral Gables, Florida. She majored in English History at the University of Miami, was a member of Kappa Kappa Gamma Sorority and spent a year in law school. Her career before the WASP also included her position as a German translator at the Censorship Bureau and as a Link instructor at Embry Riddle University.

Winnie learned to fly because all her friends were flying. She took lessons at a seaplane base in Miami from Nancy Batson, who was later hired by the Air Transport Command as one of the first female ferry pilots in the Air Transport Command’s Women’s Auxiliary Ferrying Squadron. Winnie was accepted into the WASP training program in Class 43-7. After graduation, she was stationed at Mather Field, California, completing B-25 school. She was then transferred to Biggs Field, El Paso, Texas, to fly B-25's as a tow target pilot.

Even before the WASP were disbanded in December of 1944, Winnie began writing a book, "WE WERE WASPS," completing it in 1945. The book, featuring the drawings of her great friend, WASP Dot Lewis, is now in its fifth printing. 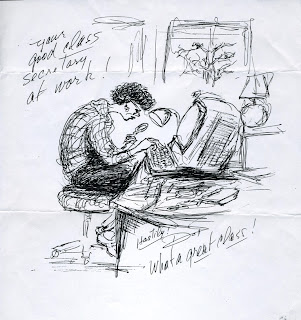 During her life after the WASP, Winnie worked in New York in personnel for B. Altman. She then returned to Coral Gables where she earned a Master's Degree from the University of Miami. She spent time teaching in California and then taught in Europe for the USAF.

Returning to the states, she worked as a school teacher at the Idyllwild Elementary School for a number of years. (She had a large group of former students who kept in touch with her and visited with her over the last few years.) She also taught school in San Marcos, California, where she lived for a number of years before moving back to Idyllwild to live with her friend, WASP Dot Swain Lewis, for almost 20 years.

Winnie fought a valiant battle against macular degeneration, finally moving into ‘The Village’ in Hemet, Ca where she continued to work on a novel about the residents of a fictional facility-- much like the one she lived in. Dot Swain's drawing is a tribute to Winnie's great effort to keep in touch with her classmates--taking on the responsibility of Class Secretary. Her greatest delights, said Chig Lewis, "was the ascension of her niece, Janet Reno, and all that involved." 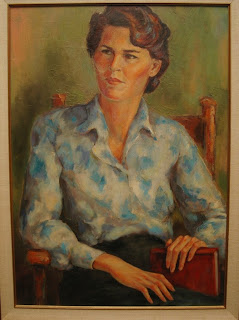 Winnie was a ‘larger-than-life’ woman who never left you wondering how she felt or what she thought. Winnie called it like she saw it--and, thankfully, she decided to capture exactly how she felt about being a WASP. Her 1945 book, "WE WERE WASPS," is a delightful recollection of her experiences--and in her typical ‘ no holds barred’ fashion, she told it just like she remembered it and left it for America to enjoy

It would be difficult to put into words the ‘last flight’ of Winnie Wood. However, she did not leave that for any of us to do. She did it herself sixty-four years ago, and it is just as relevant today as it was on the occasion of her ‘last flight’ for the Army Air Force-- in 1944, as she records it on p. 191 of her book, "WE WERE WASPS". In her own words……

“The ground station gave us directions as though this were just another mission. Our time up, we swung around the area for one more look at White Sands, Alomagardo , the firing ranges, all the landmarks that had grown so familiar to us. Then we went in.

It would be nice to say that I greased that last landing in, but it wasn't so. With the usual bounce and hop, I got the ship down and taxied to the ramp.

‘Form One’ took a long time. So did gathering our gear and checking to be sure the ship was in order. Finally, we could delay no longer and had to climb out. Kaddy patted the wing as we walked toward the nose of the ship.

“Goodbye baby, you're a good ole girl,” she said.

We stood off and took one last look at the ‘Baby’. We certainly had spent a lot of time flying with her. It was like saying goodbye to someone we loved.

"All the flight equipment that we had used had to be turned in. The A 2 jackets, with our squadron insignia of a flying duck towing a target, were placed in the duffle bags with a sigh. Helmets, goggles, fur lined boots, that we had so needed on the high altitude missions, followed. The lockers had an empty forlorn look....

...Leaning back in the day coach, I began to see it all so clearly that it will last me for always, in color and with music. The California snow and the Texas canyons, the music of the B25s and the ‘git fiddle’, all the planes, and all the people that were slipping right out of my life. They took away my silver wings, but they left me with something brighter, something that won't tarnish until I am old and feeble and can no longer even remember fun.”

In 1994, Winnie wrote an epilogue for "We Were WASP". In those final pages, she talks about America's new-found interest in the WASP. Her friend, Kaddy Steele, who had taken that last flight with Winnie in the B-25, joked that they were becoming "Living Legends".

"Living Legends!" wrote Winnie, "I cannot believe that any of us, as we marched to flight line, worried about check rides or wrestled with our zoot suits, thought we would ever deserve such a label. Still, it has a nice ring to it."

God bless Winnie, her wonderful family, and all whose lives she touched with her giant spirit, her hearty, infectious laugh, and her talent for telling a great story.

She has climbed to the peaks above storm and cloud
She has found the light of the sun and of God,
I cannot say, I will not say
That she is dead. She is merely flown away.
James Whitcomb Riley

Posted by Wings Across America buglegirl at 8:17 AM 20 comments: