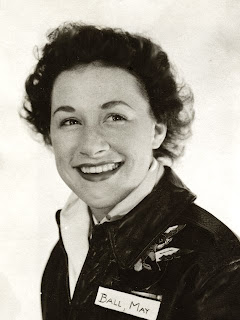 Born on May 3, 1920, in Clintonville, WI, May Ball Pietz Behrend was quickly introduced to adventure by her father at his airfield near Sturgeon Bay, where his musical vaudeville act often entertained at early air shows. Later, after her parents moved to the Quad Cities, May enrolled at Augustana College.  Before morning classes, her father drove May to the Moline, IL airport for flying lessons, which soon earned her an opportunity to enter the WASP (Women Airforce Service Pilots) program at Avenger Field in Sweetwater, TX, where she flew many planes including a B-24 after graduation.
May was then stationed at Scott Field where she flew AT-6s, and DC-3s while radio operators trained on her flights.
During college days, May helped earn her tuition by dancing with the Dot Carlson's Ballet Jubilesta group who entertained at state fairs and theatres. Dancing and music, especially jazz, remained passions throughout her life.
During May's marriage to Vernon Pietz, she enrolled her three children at National College of Education (National Lewis) while she was earning a Masters Degree in Education. Her first teaching job was at Golf Junior High School, Skokie, IL, where she became interested in film. This led her to further studies at Columbia College and a Masters Degree of Fine Arts in Film. Next, she taught at Niles North High School, also in Skokie, and expanded the filmmaking and film appreciation courses with some literature classes before retiring in 1985. In 1991 May became director of Facets Chicago International Children's Film Festival, later writing film reviews, directing part of the Media Arts Camp and also the selection jury at Facets. Other passions May pursued included sailing out of Columbia Yacht Club in Chicago and the North Channel Yacht Club in Ontario, Canada. Also, as an enthusiastic student at Alliance Francais, May often traveled to France and studied there while pursuing her love of good wine and fashion.
After 88 years of joie de vivre, May "touched down" with a "soft landing" on July 27, 2008, having spent important parts of her journey with her husband of 24 years, Jack Behrend; daughter, Linda Theede; sons, David and Douglas Pietz; grandchildren, Jonathan Pietz and Carolina Gier; sister, June
Horowitz; many friends; and cat, Genoa.
A celebration of May's life can be made to one of her favorite organizations including: Doctors Without Borders, NARAL, Wellstone Action Fund and ACLU.
Published in the Chicago Tribune on 8/1/2008
Posted by Wings Across America buglegirl at 9:24 AM 2 comments: