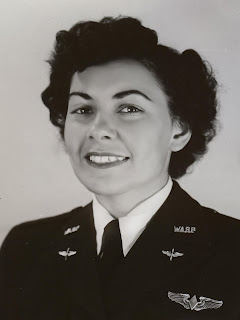 Earlene LOIS HAYES –IN HER OWN WORDS:

“I was born on November 15, 1919 in Ishpeming, Michigan. When I was four years old, we moved to a small village out side of Detroit. I learned to drive a car, the famous Model “T” when I was ten years old. When I was fourteen or fifteen, a friend purchased tickets for a plane ride, 15 minutes for $5; it was a four seater. I decided I wanted to learn to fly.

I heard about the Ferry Command and decided that was what I would aim for. Hance Air Field, a cow pasture, pure mud when it rained, and frozen ruts in the wintertime, was where I learned to fly. We trained in Piper Cubs and Luscombes.

I applied for admission to the WASP, and was rejected because I did not meet the height requirement of 5’ ½”. I requested another appointment to pass the physical, stating that exercise and stretching would help me meet the height requirement. The request was granted. For the next several months I hung from pipes my father installed in the basement and went to a chiropractor recommended by some pilots I knew. Strapping me to a table, he turned on a motor that separated the table in the middle and also me. One treatment and several months later I passed the physical.

I entered the class of 44-5 and upon graduation I was assigned to Headquarters Army Air Forces Pilots School (basic), Courtland Army Air Field, Courtland, Alabama. My duties were engineering testing, ferrying, administrative, then to Headquarters Army Air Force Providing Ground Command, Eglin Field, Florida. My duties were the same as Courtland. I attended Officer’s Training School in Orlando. I checked out in the following planes: PT-17 and 19, BT-13 and 15, AT-6, UC-61, UC-64, P-47, P-39, A-20, B-25, C-47 and L-3.

After deactivation, I joined the Red Cross, March 1945. I learned to drive every kind of truck available, including the 2 ½ ton truck in the Red Cross Clubmobile. I was assigned duty in England and Germany. I met my husband, James Hayes, in Germany. He was the commander of the 10th Constabulary Squadron that my club served. We were married in Kitzingen, Germany twice. The legal ceremony was performed by the Burgermeister (Mayor) of the town. A minister according to our religious beliefs performed the second ceremony. My wedding dress and shoes were made out of a parachute that someone had given me.

Since my husband was a career officer in the Army, we were constantly on the move from city to city and country to country. We had four children, three boys and one girl. Our oldest son, James, Jr., is a West Point graduate, our second son, Edward, is a pilot for American Airlines and our third son, Keith, did spend three years in the Army in the Military Police and is now the news director and broadcaster for a radio station. Our daughter, Heather, was a Captain in the Army and is now going back to school to get a teaching degree. We also have a grandson, James H. Hayes III, who is a cadet at the Air Force Academy.

I considered renewing my license, but changed my mind after spending several hours dodging traffic in and around Los Angeles. My husband decided to become a pilot, with instructions from our son, and received his private license at the age of 68; the traffic didn’t bother him. His FAA check pilot was WASP Gene Fitzpatrick.

Lois Hayes passed away quietly September 24, 2008, at her home in Westlake Village, California. She was 88-years-old and with her family when God called her to Him. Earlene was married for 62 years to her husband Jim, who died in March. Former British Prime Minister Benjamin Disraeli may have had Earlene in mind when he said, "You can tell the strength of a nation by the women behind its men." She lived an amazing life. Born Earlene Lois Flory in Ishpeming, Michigan, on November 15, 1919, she was one of five children of George and Ella Flory.

She joined the Women Airforce Service Pilots in 1943, and trained at Avenger Field in Sweetwater, Texas, to take over the military and civilian test and ferry pilot jobs usually held by men so they could go to the front in World War II. She was decorated with the American Campaign Medal, World War II Victory Medal and the National Defense Service Medal. In 1977 Earlene and the 1,024 other WASP were given official military veteran status and commissioned as 2nd Lieutenants in the Air Force reserve (Very Inactive).

Earlene met Army Lt. Col. James H. Hayes in Aschaffenburg, Germany in 1944 when she was working for the American Red Cross. The two were married in 1947. One of the proudest days of Earlene's life was when she pinned the pilot's wings on her grandson, U.S. Air Force Captain James Hayes III. Colin, James' brother, currently a sergeant in the Marine Corps, is a much-decorated veteran of the Global War Against Terrorism and was also a source of great pride for his grandmother, Earlene.

She is survived by her children, Jimmy, Allen, Keith and Heather; her daughters-in-law, Terry and Katie; and her grandsons, James and Colin; all of whom miss her very, very much. Services: October 13, 2008, noon, at St. Maximilian Kobe Catholic Church,5801 Kanan Rd., Westlake Village, CA 92361.

Posted by Wings Across America buglegirl at 9:25 AM 3 comments: