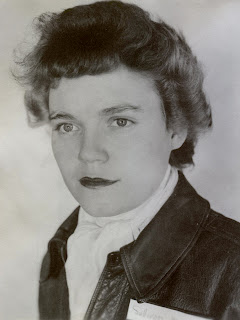 Madeline Sullivan Conley O'Donnell A longtime resident of Menlo Park, Maddy passed away peacefully on August 4th at AlmaVia of San Francisco a few months after her 90th birthday.


Born in Brooklyn, NY, in 1921, and raised in Bellerose, Long Island, she is survived by her younger brother, Robert Sullivan, and three children, Patrick, Keelin and John (her daughter Keavy left us in 1992).   A loving step-mother to Kevin, Kerry and Mark as well, she was proud grandmother to Bill, Kimberly, Megan, Christopher, Katie, Joe and Mack, and 5 great grandchildren.

She met her first husband, John Conley II, while on the chow line in Colorado Springs in 1944; they were married nine months later in St. Patrick's Cathedral in New York City. She gave up her first love - flying - and they eventually settled in Larchmont, NY to raise their four children.

A few years after John's passing in 1969, she married John Gerard (Jerry) O'Donnell and expanded her living horizons to Hong Kong and Beirut, where they spent four years before moving to Menlo Park.
Her passion for tennis, fast driving (in her Miata) and story-telling were renowned.

* Madeline was stationed at Dodge City, Kansas, where she would have gone thru B-26 transition training.  She was then transferred to Gowen AAB in Boise, Idaho and, eventually, Peterson AAB in Colorado Springs, Colorado.  At each base, WASP flew  B-26's as part of the Army Air Forces training command.  Missions included tow target,  simulated attack and instrument instruction.