“If I had my ‘druthers’,  I’d rather be in an airplane, but sailing is very close to it.  I like to say that I traded my wings for sails.”    Florine Phillips Maloney 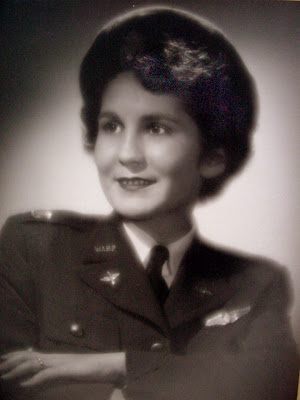 Florine was born in Chicago, Illinois on January 14, 1920, the second of three children.  She described her childhood as a happy one, raised by a single mother and surrounded by an extended family of cousins.
During high school, Florine became interested in journalism, working on the school paper and her high school yearbook.  Following graduation, she entered the University of Chicago but soon transferred to a business college. Upon  completing the coursework there,  she became a steno typist and eventually worked for American Airlines as a reservation agent on the midnight to eight am shift.
With just a little encouragement from her brother, who was in pilot training with the Army Air Forces following his attendance at West Point,   Florine began taking flying lessons at a small airport near her home.  Eventually,  American Airlines transferred her to Love Field, Dallas, Texas.  It was there that she heard the word “WASP” for the first time.  After discovering what it meant, she immediately applied to enter the flight training program required to become a WASP and was accepted.
She arrived at Avenger Field, Sweetwater, Texas on November 1, 1943, together with 103 other hopeful young women pilots.  Less than 2 months after arriving for training, she was granted leave for 48 hours to travel to Love Field to marry Lt. Robert Mancib.

After seven months of Army Air Force flight training, she and 51 of her classmates graduated on May 23, 1944 and received their silver WASP wings.  Proudly in attendance at her graduation: her mother, her  brother (an Army Air Force pilot), and her sister, Rosalie, marching in review as a member of class 44-W-9.
Florine’s Army orders sent her to Love Field, Dallas, Texas, where she was assigned to fly with the Fifth Ferrying Group.  She ferried AT-6’s from the factory to training bases and points of embarkation. She was transferred to Ellington Field, Houston, Texas, where she primarily flew AT-10’s as an administrative pilot.   Her most vivid memory of her flying assignments there was flying a Norden Norseman,  fitted out as a hospital transport,  to San Antonio with a soldier in traction, attended by nurses and doctors.
After the WASP were deactivated, Florine, now divorced, joined her sister, Rosalie,  and applied to the American Red Cross for duty overseas.  The two sisters spent almost two years in Naples, Italy, running the American Red Cross Club Division.
After returning to the States, she met and married Tom Carley.  As Florine later remembered, “We had a lot in common.  He had an airplane and I had wings.”    They had two children:  Keith Maxwell Carley and Laura Phillips Carley.  Soon after their tenth anniversary, Tom passed away.  While raising their children and finishing the house they had started building, Florine married Howard Scaife and became a step mom to his two children.  Following Howard’s death,  Florine became quite a sailor, sailing to the Bahamas, Bermuda, Tahiti, and eventually to Guatemala.
After returning to the States, Florine  fell in love and married another sailor, Mac Maloney, who was a retired Marine Colonel and successful author.  She spent many of her last years copy- editing  Mac’s book,  “Chapman’s Piloting”,  the ‘Small Boater’s Bible’.
The last few years found Florine and Mac living near the water and enjoying  trips on their  38’ trawler named ‘Leeway.’

Surrounded by many challenges in her life, Florine always remained positive:   “I guess I’ve always known that God was gonna take care of me...and He has!    When I think of some of the scrapes I’ve gotten through, it’s a miracle!”
Florine was a member of the DAR (Daughters of the American Revolution) in both  Illinois and Florida.  She was also the proud holder of Ham Radio License N4CGG.
In May of 2003, we were privileged to interview Florine in her home in Pompano Beach, Florida.  During our brief visit, we took a picture of she and Mac in front of their beautiful  boat, which was less than a block from their home.  This picture truly represents  how we remember her:   holding Mac’s hand, happy, smiling, proudly standing as tall as she could, despite the physical challenges. 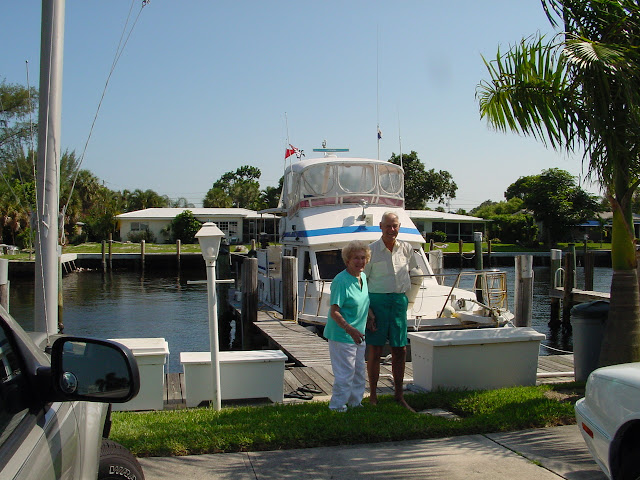 Florine Phillips Maloney:  a unique, one-of-a-kind sailor/WASP is now truly flying higher than she has ever flown before.
God bless all whose lives she has touched and will touch.

v/r written and posted by Nancy Parrish
from the video interview with Florine Maloney,  May 4, 2003
*Photos from the Wings Across America archive

Posted by Wings Across America buglegirl at 5:57 PM 2 comments: