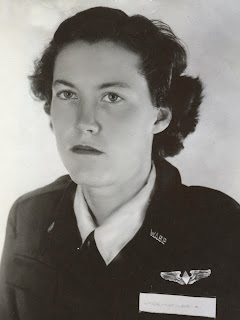 The news came in from a note, penned by the executor of Ann's estate.
There was no obituary and there were no listings of any articles or information online about this WASP from class 44-W-4.

I've spent the last few hours trying to find out more information on who Ann was--and how she spent her life. I looked in my usual standby--Betty Turner's "Out of the Blue and Into History". It is a fabulous book, because it carries with it the words WASP have written themselves. Ann didn't write anything.
What a shame. What a shame I can't find even a notice of her life and death--nothing.

However, Ann was in my mom's class, 44-W-4. I do know that she entered WASP training from Berkley, California, in November of 1943. She and the rest of her class spent a cold winter at Avenger Field, learning to fly 'the Army Way' during one of the most severe snow storms in West Texas history.

Because her last name put her 'at the end of the alphabet,' she was in 'FLIGHT TWO"-which was half of the class. Her baymates were Doris Tanner, Shirley Tannehill, Jean Taylor, Alma Velut and Nella Mae Ward. From Doris Tanner's "ZOOT SUITS AND PARACHUTES," there is a record of those first days when the girls arrived for training. According to Doris Tanner, "Ufer ... staked a claim to the corner opposite the john door" when the baymates picked their cots on that first day in training.

Doris writes "Ufer ... was taller than any of us and slouched a little. The long, lanky frame and cropped, curly, born hair resembled Amellia Earhart, who resembeld Charles Lindbergh. But most noticeable was Ufer's smoking. She didn't just smoke; she smoked one right after another, lighting the fresh one from the burning butt of the old one. It was enthralling to watch. I'd never seen a chain smoker."

"Where are you from?" I inquired politely."
"Berkley, California--just graduated from Stanford." Her tone indicated no further information would be given. She was not snooty, but reserved and somewhat detached from the rest of us.

Ann Ufer became Group Commander -- Group One. At the graduation of class 44-W-4, Group Commander Matilda Ann Ufer was given a special award for her outstanding record during training. Her first assignment was to Douglas Army Air Field in Douglas, Arizona. At this base, Ann would have flown BT-14's, AT-8's, UC-78's, AT-17's; B-25's as utility and administrative pilot and as an engineering test pilot.

Her second assignment was to Yuma Army Air Field, Yuma, Arizona. Yuma AAF was a Flexible Gunnery School and Radar Observer School, where WASP flew missions as co-pilot in the TB-26, AT-11 and BT-13.

There is no record of where she went after the WASP.
She died in Santa Fe, NM, not too far from the Army Air Base where she had been stationed in WWII.

I'm sorry I never met her. Mom said she always came to the WASP Reunions, but she didn't see her at the last one. She made a difference for our country -- and for the free world.
God bless her...and those whose lives she touched.
Posted by Wings Across America buglegirl at 8:45 AM No comments: