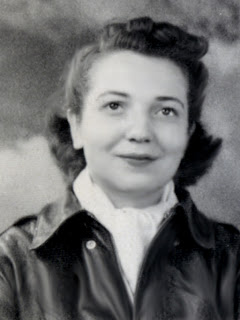 Mary Belle Ahlstrom Smith, 91, of Austin, Texas, died on Friday, June 15, 2012, after an extended illness.
She was born on January 23, 1921 in La Crosse, Wisconsin, to Judge Roy Victor Ahlstrom and Margaret Kruegar Ahlstrom.
After graduating from high school, Mary Belle entered the University of Wisconsin, later graduating with a degree in Chemistry.
In January of 1942, with her private pilot license in hand and 75+ hours of qualified flying time in her log book, Mary Belle applied for the experimental Army Air Forces flying training program for women. After passing the required tests and a personal interview with Jacqueline Cochran, Mary and fifty-seven other young women pilots entered the WASP training program as members of the third class.    Mary and 37 of her classmates successfully completed the program and earned their WASP Wings.

After graduation, Mary Belle was sent to Romulous Army Air Force Base, Romulous, Michigan, where she was assigned as a ferry pilot,   3rd Ferrying Group, Air Transport Command.  Her second assignment was to Napier Army Air Base in Dothan, Alabama as part of the Southeastern Training Command.  At Napier, assignments ranged from engineering test pilot to administrative pilot to instrument instructor in AT-6's.  PT-17's and AT-6's were also ferried from Napier.
Mary Belle and Leonard A. Smith were married shortly after the WASP were deactivated, and began their life together, eventually raising three sons.  Mary Belle retired in 1981 from the State of Texas' Austin State Hospital as a Medical Technologist.
Mary Belle is survived by her children, Stephen L. Smith of Houston, David A. Smith and wife Sandra of Big Spring, and Daniel V. Smith and wife Linda of Bastrop; grandchildren, Ashley, Matthew, Rachael, Edward, and Jared Smith; one great-grandchild; brother, Randall Ahlstrom of Middleton, WI; sister, Carol Ahlstrom Wessler of Brookfield, WI; and numerous nieces and nephews. She was preceded in death by her parents, and her husband, Leonard A. Smith. She was an active member of Hyde Park Baptist Church.
Graveside services will be held at 10:00 a.m. on Thursday, June 21, 2012 at Austin Memorial Park, 2800 Hancock Dr.
_____________________
Respectfully edited and expanded with photos added by Wings Across America.
Austin Statesman  June 18, 2012

Posted by Wings Across America buglegirl at 1:21 PM No comments: 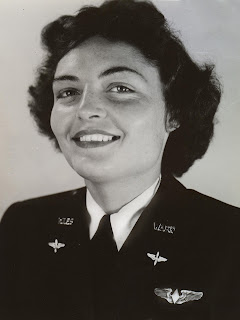 Peggy Moynihan McCaffrey,  daughter of Charles Joseph “CJ” Moynihan and Marguerite Catlin Moynihan, was born on Jan. 15, 1922, in Montrose, Colorado.   She graduated from Montrose High School  and  received her  BA  from the University of Colorado in 1943.  While attending school,  Peggy earned her private pilot's license at Combs and Haden's Airfield, where she worked as Clearance Officer and Dispatcher.

In May, 1943,  following her graduation from college,  Peggy was accepted and entered the Army Air Forces flying training program for women pilots as a member of class 44-5.  After  successfully completing the  seven months of training,  she graduated and received  her silver WASP wings.

After graduation, she was assigned to  Bainbridge Army Air Field in Bainbridge, Georgia as an engineering test pilot and ferry pilot.

After the WASP program was disbanded in December 1944, Peggy joined the American Red Cross Clubmobile Unit and served in the European theater, where she met John Edward McCaffrey.

Returning to the states in mid 1946, Peggy and John were married and settled in Colorado to begin their lives together. Eventually,  they had five children: Kathleen Tabor, Patricia Wagner, Margaret McCaffrey, Edward McCaffrey and Anne Gibbins.

After raising her children, Peggy entered Western State College in Gunnison, Colorado where she earned her Teacher Certification  in 1966. She taught language arts at Montrose Junior High from 1966 to 1974.  She then started the homebound program for the Montrose school district, where she taught homebound students from 1974 to 1985. 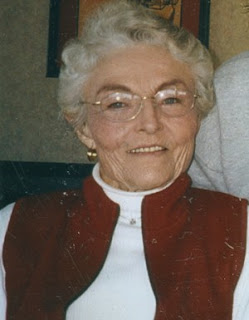 Before returning to Montrose in 1989, Peggy and John traveled throughout the South Pacific, the Far East and Europe.  In 1989, they fulfilled a life-long ambition to travel to Ireland and Scotland.   From 1996 to 1998, Peggy served as the National Secretary for the National WASP Organization.

On March 10, 2010, Peggy and all WASP  were awarded a U.S. Congressional Gold Medal for their pioneering  service during World War II.

Peggy made her final flight on Sunday, June 10, 2012. She was preceded in death by her parents; her two brothers, Jack and Dale Moynihan; and her sister, Alice Mills.  Two of her children, Kathleen and Anne, currently live in Montrose.  Patricia lives in Denver, Margaret lives in Tucson, Ariz., and Edward lives in San Diego, Calif. She had nine grandchildren and 20 great-grandchildren.

A mass of Christian burial will be held Thursday, June 14 at 10 a.m. in St. Mary Catholic Church. Donations may be made to the Heart Association or Sharing Ministries in her name.


Respectfully edited and reposted from  the Montrose Daily Press, Wednesday, June 13, 2012 with additional information  from WASP Betty Turner's "Out of the Blue and Into History" in Peggy McCaffery's own words: pp. 401-402.
Posted by Wings Across America buglegirl at 8:54 AM No comments: