Reposted from the National Archives 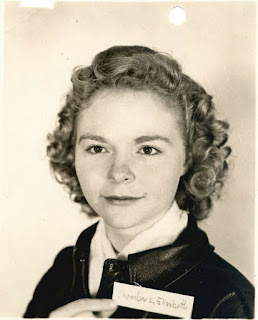 Posted on December 20, 2014 by hilaryparkinsonToday’s post comes from Ashley Mattingly, an archivist at the National Archives in St. Louis.

The year was 1943, and Elizabeth “Betty” Maxine Chambers was a young mother and a widow. Betty’s husband, Army pilot Lt. Robert William Chambers, had died in 1942 when his P-38F Lightening aircraft crashed at Mills Field in San Mateo, California. Undaunted, Betty applied to be among the first female pilots in the newly formed Women Airforce Service Pilots (WASP) program.

A native of Hollywood, California, Betty worked for the Walt Disney Company inking cartoon celluloid cells and for Universal Studios inking cells for “picture process work.” After the death of her husband, Betty and her baby moved in with her parents; she also acquired a more stable job as a telephone operator at Southern California Telephone Company.
Betty wanted more. Like more than 1,000 other women, she took to the skies to find it.
Betty and her comrades applied to an innovative civilian program designed to employ women to ferry wartime aircraft, serve as flight instructors, tow targets for live anti-aircraft practice, transport cargo, and fly experimental aircraft. These female pilots relieved men from domestic duties so they could fight overseas in the war.
The WASP program was created in August 1943 when two other formerly established programs were merged: Jacqueline Cochran’s Women’s Flying Training Detachment (WFTD) and Nancy Harkness Love’s Women’s Auxiliary Ferry Squadron (WAFS). The WASP program was directed by Jacqueline Cochran while Nancy Love became the Executive of the Ferry Division of the Air Transport Command.
Women who possessed a pilot’s license and were between the ages of 21 and 35 were welcome to apply. Aviatrixes across the United States fled from their desks and kitchens to climb into cockpits to serve their country.
After an interview process, the women were trained as rigorously as military pilots and were paid at a rate of $1,800 per year. Successful trainees were stationed at one of 120 air bases, paid $3,000 per year, and reclassified as civilian pilots.
Like the majority of her fellow pilots, Betty Chambers received her training at Avenger Field in Sweetwater, Texas. After training, Betty was sent to Turner Field in Albany, Georgia then attended the Army Air Force Tactical School in Orlando, Florida. She was later stationed at Greenwood Army Air Field in Greenwood, Mississippi.
As male pilots returned from wartime service, WASP members in service at the end of 1944 were forced to resign. Men wanted to fly domestically, and the country wanted women back at home to take care of their families. Betty Chambers was among the group of women whose service ended when the WASP program was disbanded.
This December 20 marks the 70th anniversary of the deactivation of the WASP program, a program so beloved by the women who served under it that many alumnae continued to fly and attend reunions.
On November 2, 1977, President Jimmy Carter signed Public Law 95-202, which granted military veteran status to all who served under the WASP program. In 2009, the highest medal awarded to civilians—the Congressional Gold Medal—was bestowed upon the Women Airforce Service Pilots.
The National Archives at St. Louis maintains the civilian WASP official personnel folders (OPFs). The administrative paperwork in these files reveals story after story of WASP adventures and history. OPFs are open to the public and photocopies of OPFs can be obtained for a fee. Please visit http://www.archives.gov/st-louis/archival-programs/civilian-personnel-archival/ for more information.

Respectfully reposted from THE NATIONAL ARCHIVES

Posted by Wings Across America buglegirl at 11:02 AM 2 comments: