In 1999, WASP Rose Palmer came to Waco, Texas to visit with her old baymate, WASP Anita 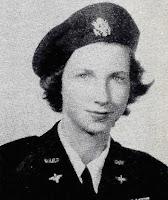 Paul (AKA Sister Teresa). Even though they had not seen each other for over 50 years, it was as if time stood still. The young girls they used to be crept out in the whispers, the laughter and the friendship that could never grow old.

The next year, Rose came back to Waco, to the studios at Baylor Film & Digital Media for an interview with Wings Across America. Being on camera was not something she was used to, but, after a few minutes, she warmed up to the concept and to the opportunity to share her story.

From the Wings Across America interview with Rose Palmer:

Rose Alice Palmer was born in Fort Worth, Texas, September 30, 1921. She considered herself a tomboy, always tagging along after her older brother and his friends. Her father, who had been born enroute to America from Ireland, worked as a traveling salesman for Carson Perry Scott. When she was old enough, Rose would go along as his helper.

“I would go to town with him. He would go to the big stores in Ft Worth. If they wanted a product or whatever he had, then I would go back to the truck and get the samples and take them to him. Then at noon, he would give me my weekend allowance and I would stay downtown and go to the Worth Theatre. There were 3 big ones, the Worth, the Palace and the Hollywood. I would stay downtown then and go to the show and take the bus home.

I got a quarter for Saturday. That was a nickel for a Rockefeller hamburger, 10 cents for the show, and then it was only a nickel or a dime for the bus fare. That was Saturday’s and then I would get the other quarter for the week. So, I got 50 cents a week. But that was all you needed!”

Her most memorable teacher was Mrs. Noble, the math teacher. “When you took a test, she would write on the board, “First to thine own self be true,” and she’d leave the room. There would be no supervision at all, and nobody cheated! I don’t know of any student in the class that didn’t really respect and look up to her.”

Rose spent her freshman year of college at Texas Christian University as a Chemistry major, but in 1936, after her father was killed in an automobile accident, she began working in a book store to pay her tuition. Her sophomore year, she transferred to the University of Texas, where she could take classes in architecture and accounting.

After America entered World War II, Rose began working at an aircraft factory (later Lockheed Martin). She called it ”experimental engineering.” She was one of only 3 women engineers. As she described her primary job: “...just what was needed to get any problems that they were having designing the B24’s. They were having some problems with the tail turret, so that was our baby! I designed the tail gunner turret…the back of the plane. They were having trouble with it, and they assigned it to me to redesign it, which I did.”

Her first time in an airplane? “Oh, I loved it! I thought that was great…I gotta be doing this. I soloed and took to it quite readily. I really got the job to get money to pay for my time."

After being accepted into the WASP training program, class 44-W-6, Rose was assigned to her first flight instructor—a man she describes as “the mad Russian.” According to Rose, they didn’t get along. She finally had to tell him, “If you want to tell me something you can tell me without the expletives…without cussing. All you have to do is suggest it or tell me what you want. Don’t yell at me.”

After graduating and earning her silver WASP wings, Rose was sent to Courtland AAB, Alabama, but only stayed 2 weeks. Her next assignment was to Buckingham AAB in Florida—where she trained to fly tow target missions in the B-26 “Martin Marauder”. One of her fondest memories is when her brother came down from Orlando. “The tower called, we were taxiing out, but we hadn’t gotten on the taxi strips. I said, “Tell him to pull up in front of the tower there and hop aboard.” He said , “No thank you. Your brother does not desire to fly in a 26!” According to Rose, the B-26 was her favorite airplane.

After the WASP were deactivated, Rose flew several ferry trips to an airplane graveyard in Wickenburg, Arizona. She signed up for the USAF Reserves and reported to Carswell, where she ran the Link Training Department. Later, during Korea, she served as Assistant Adjutant at Carswell, eventually Assistant to the Chief of Personnel for the 8th Air Force—in Bangor, Maine.

This wonderful WASP was a kind, gentle soul, who believed she could do anything and did--but she did it quietly, no fuss --just hard work, determination and persistence. We are forever grateful to her for her kindness and still remember the sparkle in her eyes as she described flying—everything about flying. The other thing that made her sparkle? Her little black dog.

Written and submitted by Nancy Parrish, April 7, 2008. Information and quotes from Wings Across America interview with Rose Palmer, 2000

From the Fort Worth Star Telegram:

Rose passed away on April 1, 2008, at a Fort Worth nursing home. She was a member of University Christian Church. She was preceded in death by her brother, Sam L. Palmer. Survivors: Her sister-in-law, Nancy Palmer; nephew, Jim Palmer; niece, Sally Palmer; great-nephew, David Palmer, all of Fort Worth; great-nephew, John Palmer Truelson of Boston, Mass.; and numerous cousins.

Posted by Wings Across America buglegirl at 8:49 AM No comments: