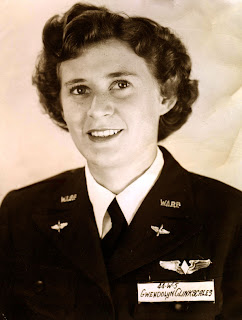 Woman one of first military pilots

Linder, 85, who died Feb. 8 of complications from Parkinson's disease, was proud of her stateside military service and would have flown combat missions if women had been given the opportunity, said her daughter, Barb Linder of Port Charlotte.

"She always thought that women could do anything that men could," her daughter said.

Linder was among nearly 1,100 Women Airforce Service Pilots who took on sometimes perilous assignments as civil servants at military bases throughout the United States during the war.

The roles fulfilled by female pilots helped free up male pilots needed overseas as U.S. involvement in the war escalated.

Linder test-flew repaired planes to make sure they were safe for combat, and flew planes towing targets for live anti-aircraft artillery practice by male gunners on training missions. WASP also helped relocate planes from aircraft factories to the bases where they would be deployed.

Linder survived a couple of close calls during her nearly 13 months of service through December 1944. During her first solo flight in a fighter plane, the landing wheels would not lock into place. After several unsuccessful attempts to correct the problem by ascending, diving and reascending sharply, as instructed by the traffic tower, she finally managed to dislodge a wire that had wrapped around the wheels' locking mechanism and landed safely, her daughter said.

Another time, she landed a plane despite a malfunctioning wing flap. Workers later discovered that several tools they accidentally left in the repaired wing shifted during takeoff and jammed the wing flap, Barb Linder said.

Although more than 25,000 women applied for WASP training, fewer than 2,000 were accepted, and fewer than 1,100 completed their Army Air Forces training, Barb Linder said.

Unlike their male counterparts, the women had to buy their own uniforms and pay their own way to return home after completing their assignments.

The 38 WASPs who died carrying out their duties received no medals, death benefits or military burials.

Linder was one of many WASPs who wrote letters to Congress years later seeking recognition -- and vindication -- as war veterans.

After years of resistance, the federal government recognized the WASPs in 1979 as former active duty military eligible for benefits through the Veterans Administration.

Born Oct. 2, 1922, in Macon, Ga., Codye Clinkscales developed an early interest in aviation when pilots, instructors and flight students would come into her parents' restaurant next to a small airport and talk about flying.

She took flying lessons from a professional barnstormer and his wing-walking wife, and received her pilot's license by age 20.

Linder graduated with honors from Winthrop College with a dual major in biology and chemistry before the war, and after the war worked as a government air traffic controller and a chemist at Johns Hopkins University's Applied Physics Lab before marrying decorated Army Air Forces veteran Walter Linder, a former fighter pilot, in 1947 and starting a family.

While teaching high school honors science courses in Kettering, Ohio, for 19 years, she also taught a course in aviation ground school that enabled students to apply for a private pilot's license upon completion, her daughter said.

Linder's lifelong interest in aviation also included hang-gliding in her 50s and taking her first hot-air balloon ride in her early 80s, her daughter said.

Upon retiring 25 years ago, she lived in Daytona Beach and Tampa before moving to Port Charlotte in 2001.

In addition to her daughter, she is survived by two sons, Walt of Joplin, Mo., and Cody of Columbus, Ohio; five grandchildren; and two great-grandchildren.

Services will be private with inurnment at Florida National Cemetery in Bushnell.

Memorial donations may be made to TideWell Hospice and Palliative Care, 5955 Rand Blvd., Sarasota, FL 32438.

Photo in Wings Across America offices

Posted by Wings Across America buglegirl at 9:04 AM 2 comments: