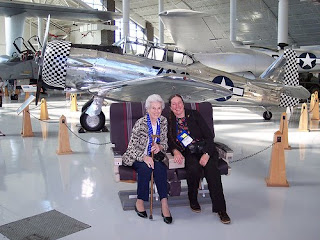 It is appropriate on these pages that we post this sad notice, for the daughter of WASP Sunny Miller Burrill, Cindy "Jes" Wiesner died Tuesday after a battle with cancer.
If optimism, kindness and compassion were the kind of weapons that could have been used, she would have won that battle, hands down.
Her passing is the kind of sad news that I find hard to write. The last time I saw her was at the WASP Convention in 2008. She was so full of life and so happy to be there. 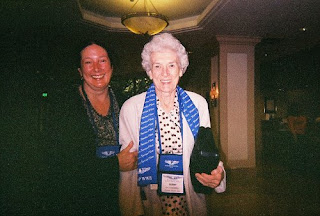 My first introduction to Cindy was thru a web page at 'twiceblessed.us' -- I thought at the time -- what a grand thing to be--twice blessed. She was. And she blessed those whose lives she touched. Her 'green mountain gal' online name revealed her love of the outdoors and the
fact that she wasn't afraid to be called a 'gal.' Perfect.

Cindy was passionate about life, blue skies and her mom, WASP Sunny Miller Burrill, 44-W-7. In fact, I think they are together in almost every photo. She loved to travel with Sunny as they re-traced many of the historic places her mom had flown as a WASP. What journeys they had together-- I remember when she took her mom to the newly opened WASP musuem in Sweetwater. It was Sunny's birthday, and she called me to make sure the museum knew about it. I tipped them off, and they threw Sunny a surprise party. Cindy was thrilled.

Cindy traveled with Sunny to every WASP convention--and, at that last convention, she helped create a wonderful event to fly the WASP back to Avenger Field. "OPERATION FIFINELLA" was a huge success--and, for the first time in her life, she got to fly in an AT-6 -- on her mom's wing. God bless the pilot who made that happen. Cindy was just thrilled. Typical of Cindy--there is really no information about her on the official Operation Fifinella website--only that she is a co-organizer with her friend, Susan King. 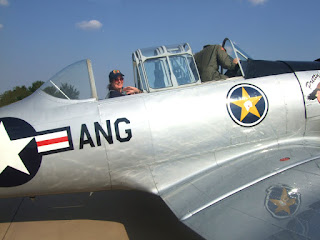 I cannot imagine a world without her enthusiasm and her smile. Cindy participated in my video when I asked the WASP kids to describe their WASP mothers in three words or less. Cindy's word for her mom? Charming. That is one word I would absolutely use to describe Cindy. It is in the genes.

What a loss...what a life...
My last email from Cindy was was about the bill to honor the WASP. She sent it on March 20: "working on this just trying to get the info to my Senator now. Huge task knowing you are behind it gives me amazing hope, I will send it to all! Love Cin and Su"
Amazing hope. That is what we should all have. Amazing hope.

God bless Cindy and her family.

With respect and love,
Nancy Parrish, proud daughter of a WASP


Posted by Wings Across America buglegirl at 7:33 PM No comments: 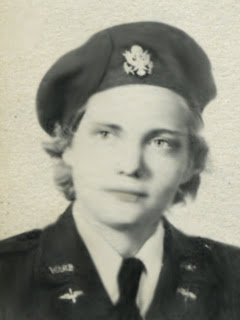 WASP Mary Catherine Quist Edwards passed away on Saturday, April 4, 2009.
There was a short notice published in the Austin American Statesman on April 6, 2009:
EDWARDS, Mary Quist, 86, of Victoria, formerly of Austin, died Saturday. Services 3:30 p.m. Tuesday, Cook-Walden/Capital Parks Cemetery, Pflugerville. Arrangements by Cook-Walden/Chapel of the Hills.
____
Nowhere does it say who she was or what she did. However, information will be posted as it is made available.
In the meantime, here are a few pieces of her story.
Mary Catherine Quist was a WASP--a member of the Women Airforce Service Pilots, first women in history to fly America's military aircraft.
Mary Catherine entered WASP training from Austin, Texas. She traveled to Avenger Field in west Texas in February of 1944 to join the class of 44-7. She graduated and earned her silver WASP wings on September 8, 1944. From Avenger, she was sent to Blytheville Army Air Field in Blytheville, Arkansas. At this base, WASP flew engineering test flights and as instrument check pilots, utility/administrative pilots, they ferried aircraft to storage and conducted flight checks on returning overseas pilots. Aircraft at the base included the B-25 (co-pilots) and the AT-10.
I met Mary Catherine at the ceremony in Galveston, Texas to induct the WASP of Texas into the Texas Aviation Hall of Fame. She wore her medal and seemed very proud and honored to be included. I only met her for a moment.
God bless Mary Catherine and her family--and all the WASP.
Posted by Wings Across America buglegirl at 12:44 PM 2 comments: