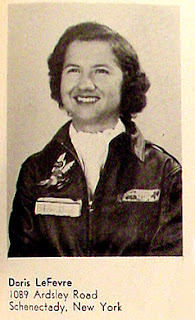 Mrs. Garrison was born in , where her father, I.D. LeFevre, was comptroller of the General Electric Company. She graduated from and , and received a master’s degree in teaching from .

In World War II, Mrs. Garrison served in the WASPs (Women’s Air Force Service Pilots), a group of women pilots recruited by Jackie Cochran for non-combat flying missions. During her time in the service, Mrs. Garrison was a member of a tow-target squadron and a group that ferried B-25 bombers between and .

She was a resident of , , for 40 years before moving to 12 years ago. In , she taught for many years at , and volunteered in the League of Women Voters and Planned Parenthood of Westchester. She was active in the Rye Presbyterian Church and a member of Manursing Island Club and the Apawamis Golf Club.

Posted by Wings Across America buglegirl at 8:55 AM No comments: