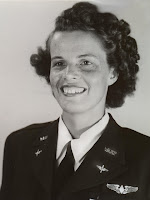 Carol took her final flight early on the morning of June 14, 2010, flying off to her final reward just the way she wanted to go – at home just closing her eyes. 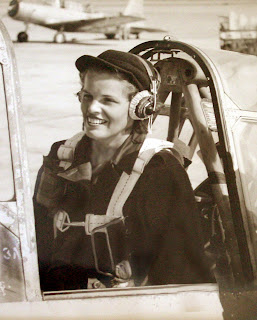 Carol led a life of exciting challenges, from flying for her country in WWII as a WASP and later with the Civil Air Patrol for search and rescue, to leading Girl Scouts on canoe trips down the Colorado and Green rivers, to riding motorcycles in middle age, to driving her van across country and her ATV around the Arizona desert in her 80’s. She led a life of service and caring for others that included raising her family, running PTAs, social work with foster children, and most recently watching out for other residents at Maravilla in her 90’s. She was fearless, fun loving, inclusive and adaptable, with a generous heart and deep faith.

Carol Elizabeth Wheeler was born on August 27, 1917 in Grand Junction, CO, moving to Arcadia, CA with her family at age 6. She married Mark James Brinton in 1938, eventually settling in Redondo Beach, CA in 1948. When Jim died in 1965, she moved to the Sacramento area, going back to college to earn a BA, and becoming a social worker for Placer County. In 1972 she married Glenn Selfridge and later moved to Burnt Ranch, CA where she helped organize a volunteer fire and rescue department. Glenn died in 1995 and she later moved to Salome Arizona and then to Santa Barbara in 2006.

The memorial service will be at the First Congregational Church, 2101 State Street, Santa Barbara on Friday, July 2, 2010 at 2 pm.

In lieu of flowers, contributions can be made in Carol’s name to either the First Congregational Church or to LifeChronicles, PO Box 31152, Santa Barbara, CA 93130.

Additional text is from an email sent by Carol's daughter, Sharon.

Besides the thrill of being in Washington for the Gold Medal Ceremony and all the hoopla and celebration that followed, she got to meet and play with her youngest great-grandson the first week of June and had a wonderful visit from my older sister and her family on Saturday, June 12th.

It has been a wonderful experience to be able to honor her while she was still with us. Even though she downplayed the importance of all of this, she really loved every minute of it. When we came home from Washington she declared that she would not give any more talks, enough was enough. However, when a teacher friend asked if she might speak to his classes, she jumped at the chance, saying "Oh, I love to talk to kids!" So in late May she spoke to a double class of AP history students at Carpinteria High - they just ate it up, and she glowed with the special attention. They had just sent her a beautiful big thank you card they had made and all signed.

When we took her the Pentagon Channel DVD, we sat and watched it with her and then she had a group of her friends come into her apartment for a showing. One of her friends at the facility, a male WWII pilot who became her biggest cheerleader, brought us a copy of the LA Times online article, telling us what a special friend she was "we had so much to talk about.
Posted by Wings Across America buglegirl at 11:03 AM 1 comment: