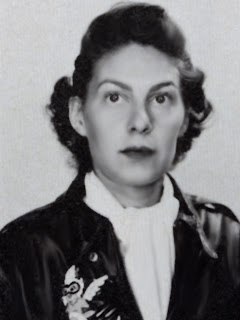 In 1943, Kornblum became one of 1,074 female pilots out of 25,000 who applied and qualified for duty as a Women Airforce Service Pilot (WASP), flying military aircraft all over the U.S.

"You wanted to do something for your country," she said in a March interview with The Journal News. "It didn't matter what. I was a registered nurse and had been planning to work in an overseas hospital, but when the chance came to fly, I took it."


The WASP ferried military planes to various bases and airfields, transported equipment and passengers and towed targets for anti-aircraft and gunnery training (eventually, flying every type mission flown by the Army Air Forces except combat).  Kornblum learned how to fly in 1940 and 1941.  By the time the WASP disbanded in 1944, Kornblum had flown about 1,000 hours for her country. She never piloted a plane again.

"For a while it felt strange not to fly, but I got so busy with other interests I never thought about it," she said.

Although they lived in barracks, wore uniforms and piloted military planes, the WASP were considered civilians and were not recognized as military veterans until 1977.

In March, Kornblum and about 300 other surviving members gathered in Washington, D.C., where they received the Congressional Gold Medal, the nation's highest civilian award.

"It was wonderful, and I feel now that we've been recognized for what we did," she said at the time.


Kornblum was born Aug. 15, 1917, in the Bronx to David and Pauline Kupferberg. She grew up in Eastchester and graduated from Eastchester High School before going on to nursing school. She was a registered nurse at Mount Sinai Hospital before entering the WASP and returned to the hospital after the war, working for several more years.


While living in White Plains, she was active in the Fort Hill Players theater group and the Prompters, a volunteer group at the SUNY Purchase Performing Arts Center. She was also active in women's rights and animal rights causes.

For the last 17 years, Kornblum was a volunteer at the Sarah Neuman Center nursing home in Mamaroneck, where Amy Lionheart, the director of volunteers, said she put in more than 10,000 hours doing clerical work, serving as a patient advocate, managing medical records and doing whatever else was needed.

A memorial service is being planned for the summer. 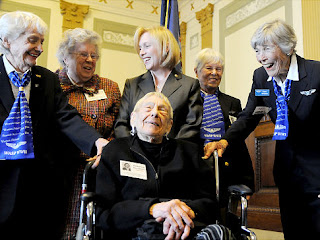 I offer this final photo--a captured moment of joy...taken after the Congressional Gold Medal Ceremony on March 10, 2010 at the Capitol in Washington, DC. Katherine is in the center, surrounded by 4 fellow WASP from New York.

To her family, to all of those whose lives she touched, God bless you with warm memories of the joy she brought to so, so many.